Shah Rukh Khan inhabits a universe that revolves solely around himself 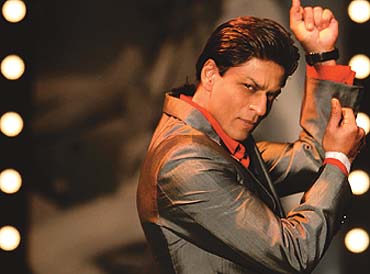 outlookindia.com
-0001-11-30T00:00:00+0553
Last week, a company sent its private jet for Shahrukh Khan, so he could grace its function. In the unlikely event of Khan needing confirmation of his regal status in the Indian Mindspace, the jet provides it at his doorstep. The upgradation in the mode of transport is a happy fallout of the success of his latest movie, Om Shanti Om. A success which made SRK exclaim to the world, "I'm priceless." The trouble is, though his recent statements make Khan sound like a case of acute megalomania, they are true.

It's doubtful if there is any other Indian actor who is so obsessed with pleasuring his viewers into submission—a unique relationship for a male star to cultivate with his audiences and not very unlike the one a prostitute with a reputation might have with her select clientele. Khan, more than any other male star in India, sees himself as an object, an image.

He was recently quoted saying, "I see myself as an employee of an image that's being created on screen. Shahrukh the celebrity is my boss. I would say that I am Shahrukh Khan's agent, secretary, celebrity manager. I work very hard to ensure he stays at the top." Clearly, Khan's is a world that begins and ends with himself. A hermetically sealed universe of one. As he said recently, "Love me or leave me." Why is no other kind of relationship possible with him? Because he is successful. So love him if you are smart. There are many who do in Bollywood and profit by it.

Khan himself is a smart cookie. It's not just the kind of the movies he masterminds, which are in themselves sentimental exercises in affected goodness and melodramatic self-sacrifice at the altar of friendship, love or hockey. They are meant to milk the tear glands and bring out the saint in the average upwardly mobile Indian, who in actual life, in all probability, does not care a hoot about such emotions, so long as he finishes first.

Khan is smart outside the studio floor as well. He is by far the most savvy media strategist in Bollywood. For the kind of omnipotent success Khan aims at, he knows that it's not enough that he sell his products. He needs to dominate the mindspace of the audience. It's a bit like wanting to be, well, God. Khan's efforts have paid off. As he observed last week, "I am a national obsession."

Bollywood is a fantasy factory. Its products do not seek to explain the world around you. Even in this age of high jinks and disintegrating distractions, art is still generally associated the world over with the need for the human being to have his life explained to him. Bollywood has gaily abdicated that function. The result is a freedom of sorts. Khan is aware of it: "Intellect and logic," he says in an interview, "should be left at the doorstep of filmmaking". And no movie in recent times has done it with more chutzpah than Om Shanti Om, which is a catch bag of all formulaic Bollywood themes, romance, revenge, jaw-dropping item numbers, dowry death, rebirth and happy ending.

Much of the movie's magic flies out like butterflies from the great floral eyes of the debutant heroine Deepika Padukone, whose incandescent retro-looks are a challenge to the forced, sexed-up mask that, say, a Sushmita Sen wears to pitch herself into the audience's libidinous affections.

Yet in scale and conception, the film is all Khan. His overreaching ambition, though, is disproportionate to his severe limitations as an actor. In a rare moment of humility, he once said he had only "three to five emotions" in his repertoire—and these rely entirely on the muscles around his mouth. The eyes express nearly nothing. This is a man who loves to talk, talk, talk. And he is ready to back it with his abs. The incredible thing is that whether curling his lips or crunching his abs, Khan has pulled it off. And so we keep talking about him. And so does he.

(The author is a novelist and poet.)

"Minutes Later, The Police Had Surrounded My House"