A typical Gemini, she had distinct public and private personas 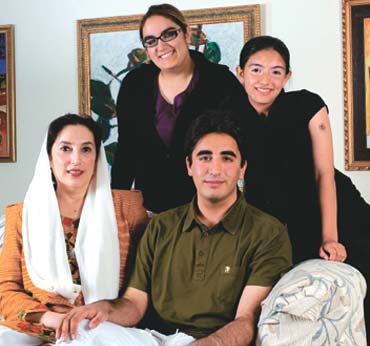 "I want to go back to Pakistan. My party needs me. I know it's a huge risk. My children need me too. So does my mother. If they arrest me, throw me in jail, who knows even poison me...if something happens to me, who will take care of my children and my mother?" This was a prescient, angst-ridden Benazir Bhutto in 2002, pulled in different directions. She could hear destiny calling but was bound by her duty to her family. She spoke frankly about the all-too-real risks of tackling Musharraf's Pakistan head-on when the pressure from her party workers to return and lead the charge against the military government was mounting. However, in public all she would say—repeatedly—was that the party would decide when the time was right for her return, reflecting the Gemini-esque dichotomy between a very private woman who shared confidences in a constant stream of SMSes or long, late-night telephone calls and the very public persona who always said and did the right thing. 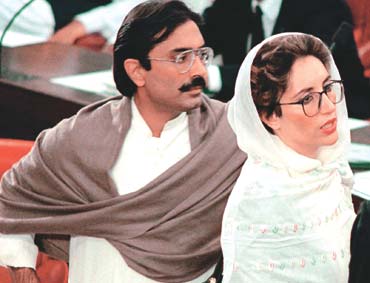 During the eight-month-long publicly denied talks with Musharraf on the so-called power-sharing deal (a term she abhorred—she kept asking "what power?") she would update me with the unspoken caveat that what she said could never be reported. Today, I can reveal—as difficult as it is to believe—that Musharraf and she enjoyed talking to each other and that, at the end of the last tortuous talks, she and he had decided that if they could not be friends they would not be enemies. But that was not to last. The shock imposition of the Emergency tore that semblance of an agreement to shreds. When she finally turned her back on Musharraf, she said to me 24 hours before she went public that "the talks are over". And when the US Under Secretary of State, John Negroponte, arrived in Pakistan, she SMSed to say that my warning of taking care not to be seen as America's pet poodle was one of the reasons she was not going to be seen in public with him. 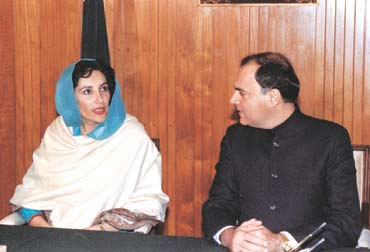 As PM: With Rajiv Gandhi during talks in Islamabad, 1988

When she did make that fateful decision to return to Pakistan, it was her decision alone. Against persistent warnings that I personally delivered on behalf of a friendly country, the woman known to be shrewd and calculating chose to place her trust, an almost child-like trust, in her security advisors and the new man at the helm of military affairs—General Ashfaq Kiyani. She believed that the army would not stand in the way of her political resurrection. How wrong she would be. In a town where not even a leaf moves unless the military wills it, a lone gunman cut down a woman who was quick-witted and sharp, whose sparkling, incandescent warmth drew me to her, to be a part of Bibi's exclusive club. These were the people whom she befriended and with whom she was candid and funny. She was the greatest of mimics, particularly when she imitated political rivals like Chaudhry Shujaat who suffers from an unfortunate speech impairment.

The cautious young woman I first met when she went from being prime minister to leader of the opposition and then back to prime minister, who chose her words with care but did not hesitate to call a spade a shovel, was a markedly different creature from the one that I tearfully bid goodbye to today. Then, she was careful not to be photographed in Bilawal House against the backdrop of a huge portrait of her husband, insisting that I use the lifesize oil painting of her slain father Zulfiqar Ali Bhutto instead. Today's Benazir did not hesitate to jump into my silver BMW and allow herself to be driven away for coffee. This was the woman whose favourite hangout for lunch and dinner was a small Italian eatery frequented by pretty young things, and who gathered a motley collection of women in Dubai for an occasional tea where she tucked into chocolate fondue and scones with lashings of cream with gusto. Her diet of fruit and vegetable juice and her aches and pains from recent knee replacement surgery—"I don't want anything to get in the way of my election campaign"—was happily forgotten. 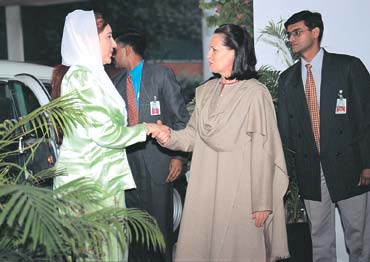 This is where, minus her trademark white dupatta and sporting stunning jewellery, uncut topaz and ruby earrings and chunky sapphire and diamond rings, she would hold everyone—including one charming young banker—in thrall. To my dying day I shall regret that I was in Bangalore when she called and asked me to meet her for coffee when she returned to Dubai for a well-earned rest from campaigning less than a fortnight ago.

In her last SMS to me, she complained about a hoarse throat. In the one before that, she had thanked me for an article I had written for Outlook ('I kept my word, Rajiv did not', Dec 31), saying she only objected to my use of the word 'harangue', arguing that what she said was more in the vein of complaining to a friend. 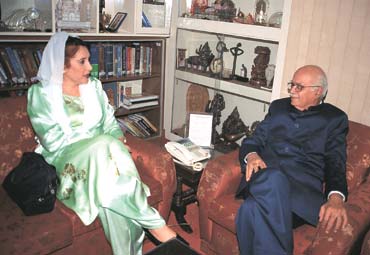 With then home minister L.K. Advani during the 2001 visit

Apart from birthday wishes and the annual crates of Pakistani mangoes for Id, and unfailingly asking after my daughter, who was studying in her favourite city, London, she showed that she cared in a dozen different ways. When her husband Asif Ali Zardari was released after more than seven years in jail and flew into Dubai, she told him he could speak to no one but me. Zardari told me months later, his roguish charm switched on, that he "dared not disobey". She rang to thank me the next day for the piece I had written, and then, responding to my query about the reunion, said, "He said I had become fat, do you think I have?"

After her maiden press conference in Dubai the day before the October 18 assassination attempt, she called me and asked what I thought of her press meet. At the airport the next morning, waiting to board the flight to Pakistan, when she couldn't find me, she called to ask where I was. In Bilawal House, a day after the October 18 failed assassination, she heard that I could not get in and sent some young man to pluck me out of the throng.

Later, ensconced in Zardari's study, I overheard the debate within the party on whether her campaign should be scaled back. Bibi would not be deterred. She was also very forthcoming on the men she believed were behind the failed assassination attempt, naming names. Again, it was not for publication.

So many images crowd in. Of heads turning and realisation dawning when the waiter serving us realises who she is. Of her at my Dubai home wolfing down authentic Malayali cuisine. When I met her husband three months after they were married in 1988, I remember he said the most frustrating thing about Benazir was how she kept rearranging the furniture in Prime Minister House. It was very apt. In the three successive homes I visited in Dubai she had a stream of faith healers and feng shui experts rearranging the furniture to ward off evil. A premonition of doom perhaps? 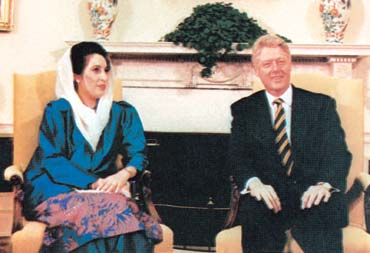 These were the fears that were writ large on the face of her children when I met them for a story on eldest son Bilawal coming of age a few months ago. Teenagers all—the youngest, Aseefa, is 14—they have now lost their sheet anchor, the mother who single-mindedly devoted herself to their care and upbringing these last eight years that she spent in self-exile in Dubai in the United Arab Emirates. During this time, Benazir grew from a woman who gave perfect sound bites into a friend and confidante who unhesitatingly shared her innermost fears and feelings. "Don't encourage Itty," she said to me of 17-year-old Bakhtawar whose interest in rap and R 'n B was frowned on by father Zardari, on whom now rests the task of holding the family, and some say the party, together.

The responsibility for caring for Nusrat who suffers from Alzheimer's disease and is rarely seen in public too will fall on Zardari's shoulders. I was at lunch with Benazir and her children when her mother Nusrat, whom I had interviewed many times during General Zia-ul-Haq's rule, was wheeled out to join us. This was not the Nusrat I had known, and halfway through the meal, to Benazir's consternation, Nusrat keeled over and threw up.

Her aides used to say Benazir was quick to get angry but with me it was more a schoolmarmish correction of facts, when I did not see things the way she saw them. In the end, she paid the price for allowing her pragmatic streak to override her very real fears of death, which she papered over in Dubai before she returned to Pakistan on October 18, even laughing away the spectre of a stint in jail. "It will give me time to catch up on my reading. Anyway I need a holiday," she said, curled up on a sofa in her brand new home, the sofas re-covered, as she pointed out, by the Malayali tailor I had sent her. 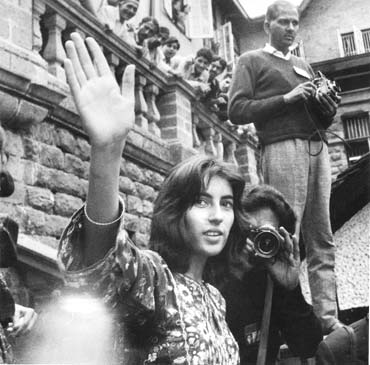 A 19-year-old Benazir during the signing of the Simla Agreement in 1972.

Sadly, the many talismans that she sported around her neck, her wrists and her arm, the feng shui protection and the propitiation of deities were in the end no protection at all when death came calling, in the shape of an armed gunman.