Debutant pacer Munaf Patel is the much-needed arrow in India's quiver of bowlers. 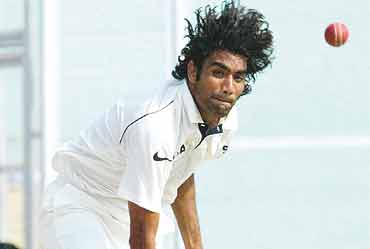 outlookindia.com
-0001-11-30T00:00:00+0553
It would have been so easy for the big fast bowler to be on cloud nine as a whole nation overlooked Anil Kumble’s stupendous achievement and toasted his own seven-wicket haul in his debut Test against England in Mohali last week. Munaf Musa Patel, however, preferred to keep his feet on the ground and head rooted on his shoulders.

Long before anyone else could even suggest it, the 22-year-old reminded himself that fate had dealt him some good cards. For one, Bharuch’s Matada Cricket Club offered him a platform that sleepy Ikhar’s Golden Cricket Club—with its limited resources—never could have. For another, a visit to the Kiran More Cricket Academy in Baroda changed his life, as the former Indian wicket-keeper referred him to the MRF Pace Academy in Madras. "I could so easily have still been bowling with a tennis ball for Golden Cricket Club in Ikhar," he said, more to convince himself than anyone else, as he watched replays of the Mohali Test in his hotel room a few hours after ensuring England’s quick fall.

"You know how it is in some families in rural India. My father was never for buying a TV as he did not want any influences on me and my three sisters," he told Outlook, pointing to the TV set in the hotel room on the day the whole of India was toasting his arrival in the big league. "It is not as if I did not watch TV at all. I caught a lot of cricket, keenly watching some of the best fast bowlers. I learnt a lot by watching them but I had no idols. There was no one I wanted to emulate."

Munaf is honest to the point of being blunt. "I had to do it for myself," he said. "I know it will sound great if I said I did it for the team alone. But look at the kind of healthy competition there is for that slot. Sreesunth and R.P. Singh have been room-mates and I knew that I had to grab the first chance that came my way. To start with, it is a big thing to make one’s debut for India in Test cricket. Kevin Pietersen’s was a good wicket to take as the first one and gave me a lot of joy. He is a great batsman. And they were having a partnership when I got him caught and bowled. The three quick wickets on the final morning of the Test match were crucial as they helped change the flow of the game. So I liked that as well."

Of course, Team India is not complaining at all that it has a decent crop of fast-medium bowlers. "Munaf has had a great start. He has bowled good speeds and consistently," skipper Rahul Dravid told Outlook, quickly adding that India can look at the quiverful of quick bowlers with some pride. "Sreesunth had a good game in Nagpur. V.R.V. (Singh) is waiting in the wings. Of course, R.P. (Singh) has done well for himself and the team."

As the Indian attack struggled to bowl Pakistan out on a flat surface in Lahore a couple of months earlier, coach Greg Chappell had said India was looking at a couple of bowlers who could consistently bowl in the vicinity of 140-145 kmph. "History tells us that teams with tearaway fast bowlers are the ones which win in all sort of conditions. At the moment we are keeping our eyes on a couple of bowlers," he had said. It does look as if the search for one of them has ended.

Kerala’s Sreesunth, who made a fairly impressive debut in Nagpur the previous week, sat out of the second Test only because he was indisposed. Uttar Pradesh’s left-arm seamer Rudra Pratap Singh was man of the match barely three Tests earlier, but has warmed the bench in the home Tests since India was looking for variety with the new ball. Punjab tearaway V.R.V. Singh is in the frame as well, but Munaf Patel has caught the imagination of a country starved of quicks.

He has come as a revelation, even if a bit raw still—as India’s last great fast bowler Javagal Srinath points out—and in need of some polishing, but Munaf Patel’s bowling is as direct and honest as it can get. "India mein kidhar bhi khelo, pitches mein jaan hi nahi rahegi. Man se khelta hoon (Wherever you play in India, the pitches are almost dead—I play from my heart)," he said, indicating that the state of the pitch would not affect his fast-bowler mindset. 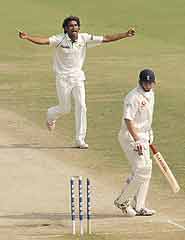 It has been a while since an Indian quick bowler fired yorkers with such good results. What’s more, he can also reverse swing the ball. And, ask him if he feels any pressure at thoughts of having to sustain the pace and he is spontaneous with his response. "I don’t feel any pressure because I don’t think I will ever need to cut down my pace," he said. The explanation is simple. "I didn’t have a great action in the beginning. It was very round-arm. Now it is good and I have a fairly high arm action. I have improved my line, length and swing and learnt a lot of things from coaches like Dennis Lillee, T.A. Sekhar, Javagal Srinath. The change of action did not bring my pace down as my bowling was natural. I cannot stress enough how important MRF has been to me."

An eagerness to learn will also stand Munaf in good stead. "I am ready to learn all the time. I realise that a guy who is a natural may not be able to share much knowledge. If you ask me how I bowl fast, how can I ever explain?" he said. "Of course, I have interacted at length with Ajit Agarkar and Zaheer Khan. Irfan Pathan has been a good friend over the last four years. Our coach Greg Chappell has emphasised the importance of line and length and of the need to be patient whether one is a batsman or a bowler. Greats like Sachin Tendulkar and Anil Kumble may not speak much, but when they do say something, it pays to latch on to every word since they assess the opposition batsmen’s strengths and weaknesses so well."

The legend of Munaf Musa Patel is well and truly rolling now. But, make no mistake, the man’s honesty does not permit him any illusions. "I didn’t start life thinking of playing for India. I just wanted to keep playing cricket, dil se. The dream started with wanting to play outside Bharuch. I didn’t think long term. I look at life from one match to another. It has been my philosophy from the very beginning. I could so easily have been playing tennis ball cricket for the Matada Cricket Club."