If Wishes Were Houses 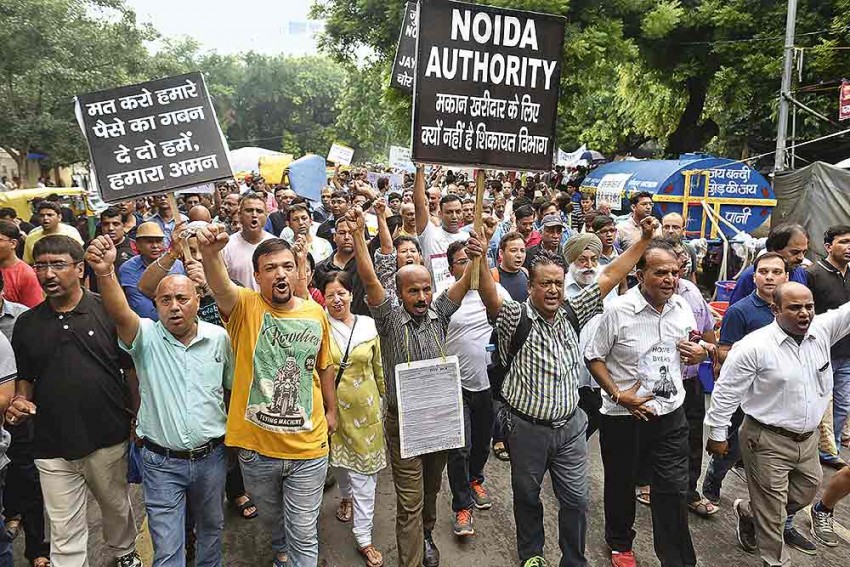 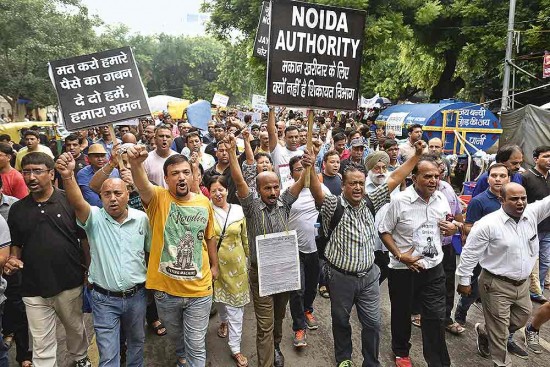 Long stretches of towering but incomplete residential buildings dot the landscape along the highways that head out of the capital, whether on Noida Expressway or near Gurgaon towards Sohna or Manesar. Many of them, like Jaypee’s Wish Town along Noida Expressway, seem to have hardly any workers on the site, while the pace of work in many others is much slower than one witnessed just five years ago.

“Out of around 35,000 flats being constructed in Wish Town, hardly around 5,000 have been delivered so far,” says Sanjeev Sahani, 57, who has paid Rs 40 lakh of the total Rs 54 lakh price of a two-bedroom flat in Wish Town that he booked in 2007. “It’s been 10 years since the project started and 90 per cent of the payments have been collected from buyers, but not even 20 per cent of the units are ready.” Eight 32-storey buildings had been proposed in Wish Town, but none has gone beyond 18th floor yet.

Sahani, who had expected to get ­possession of his dream home in 2010, is now part of several groups of ­aggrieved buyers seeking government and court help in the matter. “I am not sure whether I will get my flat in the next 10 years,” says Sahani, disheartened by the insolvency proceedings initiated by IDBI Bank against the developer, Jaypee Infratech, for defaulting on loan repayment.

Acting on the plea of the aggrieved buyers, the Supreme Court has asked the company to first deposit Rs 2,000 crore and lay out a plan on how it int­ends to protect the interest of the buyers. The court’s intervention has come as a blessing for home buyers as companies and banks rush to take advantage of the new insolvency law. Besides Jaypee, Amrapali is another big developer against which insolvency proceedings have been initiated. While companies are able to use the land assets to get out of the financial mess and banks are able to collect part of their dues, the poor buyers have started feeling more helpless.

“Except some moral ignominy, there is no financial implication for the promoter,” says C.H. Venkatachalam, general secretary of All India Bank Employees Ass­ociation (AIBEA). “He is free to start another company. Being the preferred creditor, the bank, on the other hand, has the first legal rights to the assets of the bankrupt company. As banks become one of the creditors, chances of full recovery of dues are rem­ote. This is evident with the RBI telling banks to be prepared for ‘steep haircuts’, which means be prepared for big losses. In effect, the banks will lose just like the people who are losing.”

Venkatachalam points out that home buyers are the most vulnerable as the only recourse left to them is to file cases against the developers. This is what a group of aggrieved Unitech buyers did. They approached the Economic Off­ences Wing of the government and the Supreme Court, which has assured the affected buyers that they would be given relief of their choice—either ref­und or possession of flat. Similarly, in the case of Supertech, another major real estate developer, the SC has dir­ected that the company either provide the promised flat or refund money with 14 per cent interest. Supertech’s case is different in that it ran foul of authorities for violating building norms, putting at risk the future of two 40-storey towers in its Emerald Court Project in Noida.

Over the past year, cases have been filed against many developers, besides prominent ones like Unitech, Amrapali and Supertech. Many home buyers’ groups, including Noida Extension Flat Owners Welfare Association (NEF­OWA), have approached the central aut­horities and the Uttar Pradesh government to intervene.

Various aggrieved consumer groups emphasise that barring projects of a few builders, those of the rest—both big and small builders—were all behind schedule by several years in the delivery of projects. In some cases, the work was not even half-done. Left with no choice, they warn, many buyers may start defaulting on EMIs. This is the scenario not just in the National Capital Region (NCR), but also in several cities across the country. Samir Jasuja, CEO of PropEquity, a real-estate data and analytics platform, says the maximum defaulters are in NCR. If there are 10 cases in this region, then the number in other places would be around two. Among the big defaulters are Amrapali, Unitech, Jay­pee, Supertech and Parsvnath. “Over 70 per cent projects are delayed in the Gurgaon and Noida reg­­ion,” says Jasuja. “And we don’t know how many will finally get executed and how many may end in bankruptcy. We hope eventually all will be executed, but there will be inordinate delays, of course. Many are already del­ayed by six to seven years.”

Even if they have money now and there are no disputes, it will take at least a year-and-a-half to complete the projects. In some cases, the wait may be another three to four years. Prospective home buyers reveal that even in case of projects under construction, they are not being assured of possession in less than three years, which leads buyers to question similar assurances given three to four years ago.

Rashesh Purohit, co-founder of the NCR Home Buyers’ Group, says the Real Estate (Regulation and Development) Act (RERA), which they had been pushing for, has failed to yield desired results so far because states like Uttar Pradesh have diluted its provisions. “One year after the notification of RERA rules, the tribunal is yet to be set up,” says Purohit, who was fortunate to get possession of his flat in 2016, after a five-year delay.  “In April, the UP chief minister promised new RERA rules, but there has been no movement on that.”

Having faced harassment as a buyer, Purohit continues to lend support to the rights of buyers. He is happy that the Noida authorities initiated one-to-one ­meetings with different buyers’ groups. They have also posted the list of developers who have defaulted on their land and other dues, or are yet to receive all their clearances.

Shweta Bharati, general secretary of NEFOWA, is upset, however, that ongoing projects have been kept out of RERA’s purview by the UP government. “Our group had fought for bringing the legislation with provisions to protect home buyers, but it has been diluted at the state level in favour of builders, thereby keeping lakhs of buyers in NCR out of its purview,” says Bharati, who too is waiting for delivery of her “affordable” flat in Amrapali’s Centurion Park in Greater Noida (West).

Bharati points out that besides several years’ delay in getting possession of the flat, many home buyers are facing higher charges of Rs 7-8 lakh. The reason given for escalation in charges varies from higher farmers’ compensation for land to expenses on labour welfare and water connection, among others. So instead of the builders paying penalty for late delivery and other violations and shortcomings, home buyers are being burdened. The threat of booking cancellation is forcing many to pay up, while some are seeking relief from consumer forums after taking possession of their flats.