Home  »  Magazine  »  Business  » Cover Stories  » Interviews  » Interview »  'If The Left Stalled Reforms, It Must Be Said It Helped Us Too'

'If The Left Stalled Reforms, It Must Be Said It Helped Us Too'

The economist, who's part of a four-member group appointed by the United Nations, on the current crisis 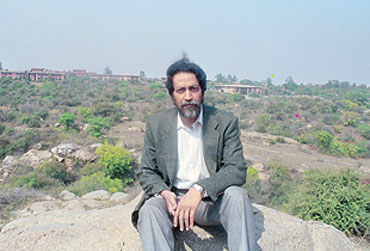 outlookindia.com
-0001-11-30T00:00:00+0553
Economist Prabhat Patnaik is part of a four-member group appointed by the United Nations to debate the consequences of the financial crisis and its impact on developing countries. The committee, headed by Nobel laureate Joseph Stiglitz, will submit its report at a UN discussion in early 2009 on reforming international financial organisations. Pragya Singh spoke to him a day before he left for New York. Excerpts:

How will the global financial crisis impact India?

It depends on what you mean by 'crisis'. No Indian financial institution is exposed as much to the risks since financial liberalisation did not proceed far enough in India. This is, of course, because the Left stood consistently against these reforms. Secondly, since the global financial crisis is giving rise to a real economic crisis, we cannot be insulated from it. The impact will be felt on exports, services and we'll also see unwelcome terms of trade forced upon us. There are chances of a real recession setting in as part of the crisis fallout. Even the FIIs are pulling out...but if we had got full capital account convertibility, the impact would have been far worse.

So the Left is taking credit for this....

The Left had strongly opposed any steps towards economic reform in India. They prevented and stalled banking reforms and also prevented full capital account convertibility, but they must be given credit where its due. They were attacked for being old-fashioned dinosaurs at the time. This is not true. Besides, you must have a consistent view of events: did the Left stall reforms, as it is accused of? If it did, then we have to now acknowledge that it has also helped us.

What's the future of economic reform in India?

I think the reform agenda was driven by the self-interest of certain groups. There were no theoretical considerations.

As the crisis unfolds, who will get hurt the most?

Luckily, the Indian rich have not yet had as much opportunity to 'reform' as in many other nations. That has given us a bit of savings, protected us a bit in terms of exchange rates as well as risks of recession fuelled by inflation. As far as the poor are concerned, inflation may be going down, but even if it becomes zero, the poor are still facing a permanent cut in real living standards. It's not as if things were OK with the poor in the first place, so the impact of lower inflation is also moderated.

What's your view of the steps taken so far in India to counter the fallout of the financial crisis?

Basically, the government is trying to use one policy—monetary policy—to ease all the difficulties in the Indian economy, fiscal or monetary. While we know that monetary policy is a fairly blunt tool in dealing with such a situation, I think it is very important for the government to take proactive fiscal steps as well. We need a much larger focus to take up expenses that reduce the possibility of inflation. And we need to ensure adequate supplies to fair price shops, as well as attention to managing the exchange rate depreciation.

There's a view that the government is perhaps not doing enough to stem the fiscal deficit?

Governments can plan expenditure that will make the books look good. But the real challenge is to combat inflation through larger policy intervention. Deficit should take the form of rural infrastructure, investment into agriculture, foodgrains production and welfare. This is what India needs.

The Out-Tray, On Balance