Home  »  Magazine  »  International  » Interviews  » interview »  'If The Leadership Has A Horse To Ride, All Cadres Cannot Expect To Have It'

'If The Leadership Has A Horse To Ride, All Cadres Cannot Expect To Have It' 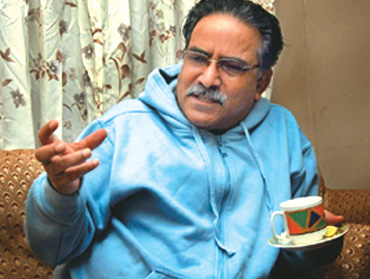 outlookindia.com
-0001-11-30T00:00:00+05:53
In December 2007, Outlook featured a story on Prachanda (The Rado Maoist), chairman of the Communist Party of Nepal-Maoist, detailing the remarkable change in his lifestyle after he emerged from the bush to join mainstream politics. We said he sports an expensive Rado watch, travels in an airconditioned Pajero, loves his daily two pegs of Johnnie Walker whisky, and has been accused of promoting his children in the party hierarchy. On a cold January morning this year, the Maoist supremo, dressed in a trendy tracksuit, met Outlook's Manoj Dahal and sportingly fielded questions on his new lifestyle, the problems revolutionary parties encounter in maintaining their ideological purity and India's role in Nepal. Excerpts:

From being an underground outfit to joining competitive mainstream politics, the Maoists have come a long way. What are the major challenges you have encountered in this switch?

We accepted multiparty competitive politics which is different from Communist politics of the traditional kind. There are many complications. Though we have accepted the principle of multiparty competitive politics, we are opposed to its fundamental belief—a government of majority and opposition of minority. Even today, we are running a government of consensus.

Competitive politics demands compromises. Is it possible for a revolutionary party to maintain its ideological purity?

For 10 years, your cadres fought for a different ideology and objective. Don't they feel betrayed now?

There is some discomfiture as also some problems. Those who are committed to the mission of military victory are not comfortable. But continuous discourse has brought all of us together to the view that issues of Constituent Assembly election, Republic, an inclusive state, etc are something that the people's movement had raised.

Questions have been raised about the gap between the lifestyle of Maoist leaders, including you, and cadres. Is the gap enormous?

We're in multiparty politics now, not in the jungles. The situation is different, issues get raised in a different manner now. We must understand that the notion of equality is relative even within Marxism. If the leadership has a horse to ride, all cadres can't expect to have that.

So, the change in lifestyle isn't a big issue for you.

We can't travel on foot in the city, can we? We need a vehicle not for comfort, but out of necessity. I am living in this house (his residence) with comrades (bodyguards) because of security reasons. It doesn't mean that all cadres should live in a house like mine. What we are doing for villagers and cadres is more important than what we wear and how we live. People who criticise us for our lifestyle are aesthetes, mechanical and narrow-minded.

How will you mobilise money for the election to the Constituent Assembly in April?

We have no plans to take external donation. That will create a moral crisis for us. It will take away our right to take independent decisions and erode our pride. We will collect money from Nepalis. It will be a low-budget election as far as we are concerned.

You keep referring to imperialist and foreign forces working to the detriment of the country's interest. Who are these forces?

We have seen how former US ambassador James F. Moriarty began instigating people against us from the day we became a part of the interim constitutional arrangement. People from Bihar indulged in hooliganism in Nepal. Many Bihari legislators delivered inflammatory speeches that instigated the Gaur massacre (in March 2007) in which 40 Maoist activists were killed. We must be vigilant against such moves.

If we fail to establish harmony between various caste, ethnic, linguistic, community and religious groups, imperialist and reactionary forces will take advantage of that. My talk of 'nationalism' these days implies internal unity; to interpret it as something against America or India would be unfair. Since we are in transition, it is only natural that external forces will play 'games'.

What has been India's role in the peace process? Have the Maoists softened their anti-India stance?

The 12-point agreement between us and the seven pro-democracy parties was signed in Delhi. That agreement was at the root of the struggle against the monarchy and authoritarian forces. Nepalis have taken that positively. But we must understand that there are many 'Indias' within India. It's a heterogeneous country, there are differences and conflict between the government (political layer) and the bureaucracy. I think India's current leadership wants elections and the peace process to succeed. But the bureaucracy does not want that. Secondly, there are pro-Hindu parties who represent Hindu extremism. (Some of them are liberal as well.) The open border has its own problems. We have seen the hand of 'Indians' in the Gaur massacre, especially from Bihar. But this should not be taken as our disapproval of the entire India.

Is the open Indo-Nepal border a problem then?

What's more important is to have a good understanding between neighbours. In its absence, the open border could become a major problem. Our emphasis is to have the 1950 treaty of peace and friendship between Nepal and India replaced by a new and updated one. The existing treaty does not address the current need. Replacement of that and other old treaties will be in both Nepal and India's interests.

Do you think China's interest in Nepal has grown in the recent past?

Nepal should stand equidistant between India and China. A policy of proximity with one would go against Nepal's independence, geographical integrity and national interest. Our open border with India and the identical culture we share have both advantages and disadvantages. Given India's size, it needs to show large-heartedness towards us.

China doesn't enjoy an advantageous position because the Himalayas straddle the border. Nor does it stand to lose much. If Nepal's transition period is prolonged, the 'interest' of all (in us) will be increased. China will not be an exception. It will not be good for us to prolong a situation where both China and India's interest level will be enhanced.