If The Family Loses This Hand...

Is India without Congress really such a good idea? And is it that easy to wish away the party? 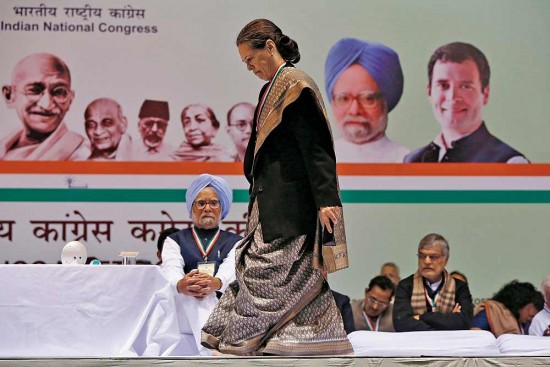 It has been an effective (but somewhat tacky) catchphrase signifying nothing, except that in its viciousness and vitriol lies a subliminal message directed at ‘the family’. The slogan ‘Congress-mukt Bharat’ or an India free of the Congress, seen by some as both tasteless and fascist, is actually a call for a ‘Nehru-Gandhi-family-mukt Bharat’. This is because the family is perceived to be providing an unfair, undemocratic and, more importantly, unearned head-start to the Congress. The RSS, concedes a long-time watcher of the organisation, wants to make the family politically irrelevant. And a seasoned political leader, who has travelled extensively during this election, strengthens the perception when he says he found much more anger directed against the family than against the Congress as such.

Whatever be the charges against the family, the grand old party of 128 years’ standing cannot be accused of rigging elections at least. It can, in fact, take legitimate credit for building an institution like the Election Commission and for allowing Indians to take free and fair elections for granted. Ironically, it was also a Congress government under Rajiv Gandhi which lowered the voting age from 21 to 18 (as an aside, it was Indira Gandhi as the Congress president in 1959 who recommended the creation of Guja­rat as a separate state). And an estimated 150 million first-time voters this time, almost one-fifth of the total electorate, are said to be so disillusioned and angry with the old order that the fate of the ruling coalition and the Congress is widely believed to be sealed weeks before the last vote is polled on May 12.