'If Pakistan Can Take Up Gujarat Riots, Surely India Can Raise The Balochistan I

When systematic human rights violations take place, says the chairperson of HRCP, not only India but the world community too should take note... 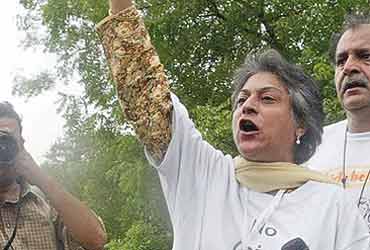 As Islamabad continues to unsheath its iron fist, and accuses India of fomenting trouble in the province, chairperson of the Human Rights Commission of Pakistan (HRCP) Asma Jahangir visited the affected areas. Her team was fired upon during the conduct of its investigations. She returned from Balochistan to demand an immediate ceasefire and permission to the International Red Cross to visit the area where, she claimed, a war-like situation prevails. Excerpts from an interview with Amir Mir:

How did the Balochistan problem start?
It's a problem that started many decades ago, and sparked the insurgencies of the Baloch nationalists in 1948, 1958-59, 1962-63 and 1973-77—all of which the army suppressed. In the 1970s, the Baloch nationalists were ousted from power by the Zulfiqar Ali Bhutto government, upon which they launched an armed struggle to reclaim power. In the 1980s and 1990s, they were part of the democratic landscape under the governments of Benazir Bhutto and Nawaz Sharif. However, since the 1999 military takeover, they have been excluded from power in the province. The subsequent standoff between the government and Baloch nationalists has broken into warfare from time to time. What has sparked off the recent crisis is the contention of the Balochis that the province is being militarised, cantonments are being set up in the name of development, and that the real motive is to completely take over the natural resources of Balochistan, particularly in Kohlu and Dera Bugti.

Why did the HRCP decide to send a team to Balochistan?
Disturbed by reports of renewed armed conflict in parts of Balochistan that began to pour in during December 2005, an HRCP fact-finding team visited the troubled areas near Kohlu. Another mission visited Dera Bugti and Sui in January, as fighting expanded. The government had denied having launched a military operation, saying it was only dealing with a law and order situation in Balochistan where a few miscreants were involved. Our information was very different. So, sitting here one could not really judge. It was really imperative for us to go at a time when we already had information on bombardments, rocket attacks, aerial firing and allegations that innocent women and children were being killed in the conflict.