'If Laloo Can Stop Riots, He Can End Abductions'

As the outcry over kidnappings intensifies, the RJD spies an election-eve conspiracy 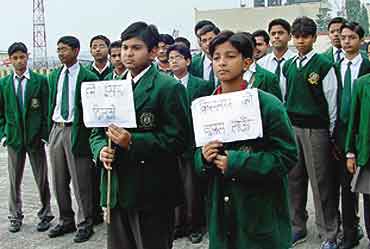 outlookindia.com
-0001-11-30T00:00:00+0553
The kidnapping of three school students over the past fortnight has shaken Patna. But extortion, ransom demands and abduction have become a way of life in this state. Loot rather than honest produce has been institutionalised. Kidnapping for ransom has become Bihar's biggest industry. In the past 13 years, as many as 32,600 people have been kidnapped.

But are the kidnapping of the school students politically engineered? Laloo believes so. "There is a well-hatched conspiracy to defame us (the RJD) and our government. The Opposition is indulging in dirty politics by stage-managing abductions," he said on January 27. The truth, however, is difficult to ascertain because kidnappings are regulation crime in Bihar.

Some of the families who have had to settle with the kidnappers say the criminals often admit that they need cash to fight elections. Dr Gopal Prasad Sinha, one of the 100 doctors who received extortion calls, says the caller told him that the "boss wants money for campaigning and he would be kidnapped if he did not pay up."

According to former DGP of Bihar D.P. Ojha, the problem is not that there are criminals in Bihar. "There are criminals everywhere. In Ghaziabad near Delhi, kidnapping is a daily reality. The real problem in Bihar is the fact that the criminals have connections in all political parties. And they are often in government." In the outgoing assembly, 40 MLAs are criminals believed to be involved in kidnapping. Moreover, many ransom demands have been traced to jails, where some gangsters are languishing. The Patna High Court has asked the administration to instal jammers that block calls in all jails. The jailor of Bhagalpur prison was recently arrested for assisting kidnappers.

The overall lawlessness, the private armies of landlords has been prevalent since Independence. But as Dipankar Bhattacharya of the CPI(ML) says: "Laloo's reign has resulted in a democratisation of criminals." Yet some of the most dreaded gangsters are from the upper castes—Suraj Bhan, Munna Shukla, Rajan Tiwari, Sunil Pandey, Rama Singh.

The OBCs and Muslims also have their gangsters like Pappu Yadav and Mohammad Shahabuddin of Siwan. Ojha believes that Laloo compromised with criminals whenever his government came under threat. He cites Shahabuddin's example: "First Laloo tried to finish him. When that failed, he patronised him."

One upshot of the criminalisation is the flight of doctors, engineers, traders and service families from Bihar. A senior police officer says that although the victims and their relatives often claim to have escaped or to have been rescued by the police, in reality ransom has been quietly paid. When the grandson of a minister was kidnapped last year, even he had to shell out the ransom. In this twisted reality, the redeeming feature is that the gangsters never murder their victims if ransom is paid.

The JD(U)'s Nitish Kumar says, "Once Laloo made up his mind to stop communal riots, he succeeded. If he wants to, he can stop the kidnapping too." But the situation has clearly spun out of Laloo's control. He has learnt the hard way that breeding snakes can have dangerous consequences. They can bite anyone, anytime.