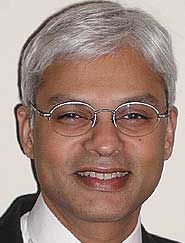 Some say he is frighteningly intelligent, others are simply in awe. His breadth of knowledge and level of scholarship are formidable. Ashley J. Tellis, the Bombay-born superstar of strategy, today ranks as one of America's foremost experts whose clarity of thought is like a force of fresh air. His India's Emerging Nuclear Posture is considered a seminal book. His other books include Interpreting China's Grand Strategy, Limited Conflicts Under the Nuclear Umbrella and Measuring National Power in the Post-Industrial Age.

Meeting the low-key Tellis, you would never know he occupies an important place in Washington's policy stratosphere because he is without airs. Apart from being a senior associate at the Carnegie Endowment, a pre-eminent Washington think-tank, he continues as an advisor to the US government. Tellis has become a valuable bridge between India and the US because of his deep understanding of both countries. He knows the Indian aspirations because he grew up there. He knows American constraints and burdens because he became an American, having come to the US in 1985.

Tellis completed his master's from the University of Bombay and his PhD from the University of Chicago. He joined the Rand Corporation, a Pentagon think-tank, as a senior policy analyst producing scholarly studies and books. His book on India's nuclear programme so impressed Robert Blackwill that he asked Tellis to come with him to India as his advisor. After a two-year tenure at the US Embassy, Tellis returned in 2003 for a brief stint at the National Security Council, becoming the highest ranking Indian American in the White House.

Deeply interested in Roman history, Tellis can be just as animated by Renaissance art and classical music as by the great games he has witnessed countries play.