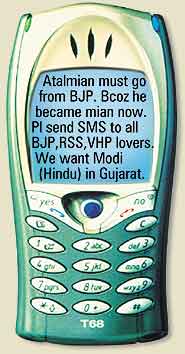 The latest anti-Vajpayee campaign in Gujarat not only has vicious undertones but is also in real poor taste. Ever since he made public his views on chief minister Narendra Modi and the post-Godhra riots, cellphone users across the state have been flooded with sms messages. "Atalmian must go from BJP. Bcoz he became a mian now. Pl send sms to all BJP, RSS, VHP lovers. We want Modi (Hindu) in Gujarat," is one message which was repeatedly being flashed. No one’s clear about the source of the messages but it was rebel BJP leader, Keshubhai Patel, who first complained at a party forum about the apparent anti-‘vikas purush’ campaign.

Following this, the Modi government was quick to order an inquiry. Significantly, sensing an opening, Keshubhai hit back by stating the Gujarat police should also take the help of central agencies to get to the bottom of the case. According to BJP insiders, the subtext of his statement was that the SMS campaign was the handiwork of Modi’s supporters and that the Gujarat police may only conduct a half-hearted investigation.

Though Modi has seemingly won the battle with a temporary reprieve at the national executive in Mumbai, the war in Gujarat is far from over. According to party sources, a larger battle between the hardliners and the moderates has just begun. Keshubhai kept away from the first day of the national executive citing health reasons. But that did not deter him from meeting the press in Gandhinagar and alleging that "a mini-emergency prevailed in Gujarat, with the farmers being wronged, the media being muzzled and mlas not allowed to speak up".

Sources say the divide within the state unit of the BJP is only going to deepen in the days to come. A senior rebel leader told Outlook: "There is a lot of bitterness. Even if there’s an attempt to broker peace between the two factions, it may not last long." The SMS campaign, he feels, was one manifestation of the anger and frustration.