Iraqis accept the inevitable, that America has 'liberated' them from Saddam. Now they want to be left alone. 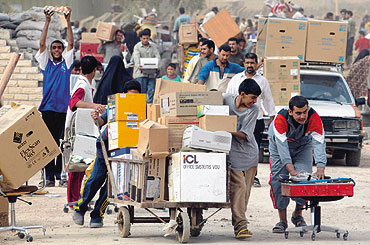 outlookindia.com
-0001-11-30T00:00:00+05:53
They fell on his image like a pack of wolves. These young men, who had known nothing but the iron grip of Saddam Hussein’s regime, were venting a lifetime of rage. They swarmed over the statue stamping, spitting and smashing the iron figure which lay at the feet of an American armoured personnel carrier. Within minutes it was decapitated. A group of men began to drag their prize onto the street. The head of the man who was omnipresent in their lives bounced down the steps under the weight of kicks and hammer blows. Finally, it was dragged unceremoniously through the streets of the city he dominated, by the people he had oppressed for so many years.

It is impossible to exaggerate the significance this moment will have on the people of Baghdad. Saddam Hussein had looked down on them from almost every corner, street and government building. His image was a constant and deliberate reminder of who was in control. Now his regime had been toppled by a group of young Americans, many of whom hadn’t even been born when he came to power. And those that tore him from his concrete pedestal were the young men who Saddam Hussein had promised would defend him with their blood.

It was a momentous day, one that will change this capital for ever. It began for me mid-morning on a quiet street, much like any other, in central Baghdad. Only two things about it were unusual. It was deserted and there was a large American tank, its barrel pointing straight at me, hugging the roadside. It was like a classic showdown played out thousands of times in hundreds of bad American movies. But in this one the US troops were armed with some of the most ferocious firepower on the planet and I had a dirty white table cloth I had stolen minutes earlier from a table in Hotel Palestine. I think I may have overdone the waving as I walked gingerly towards the enormous beast that loomed before me. And then when I got close enough the spell was broken.

"How ya doing," the young Marine said to me. "Rr, fine," I replied and that was it: I had been ‘liberated’. Then I watched as they began their final push into the centre of Baghdad. Suddenly the square which held the monument that was soon to become world-famous was surrounded by American armour. GIs perched on their tanks chewing gum and surveying the city that had just fallen into their arms. "People have been pretty nice, they know we are here to stop terrorists," one of them told me as he stood on his humvee. "They seem happy to have us here. It’s sure better than being shot at."

In truth, the emotion that greeted them was simply relief. The Shia of this city didn’t even wait for the Americans to arrive on their streets before they took events into their own hands and began looting the instruments of power that had tied them down for so long. The rest, mainly Sunni, began the war indignant and angry that their country had been invaded by foreign armies. They were ready to fight and die for their land if not their president. But three weeks of bombing 24 hours a day had taken its toll. People had had enough. They knew by now that there was no stopping the American troops and so they just sat back and hoped they would get through it alive. Even if the government didn’t, the people of Baghdad knew it was all over a few days earlier after US troops heralded the final demise of the Iraqi regime when they exploded onto the scene.

It was an absurd statement by an increasingly ridiculous man from a government that had quite clearly just lost the plot. "The infidels are committing suicide by the hundreds at the gates of Baghdad," information minister Mohammed Saeed al-Sahaf declared on Monday to the huddled mass of journalists as the air bristled with the gentle whistle of incoming artillery fire. "God is grilling their stomachs," he pronounced. In fact, it was becoming clear that the only thing being cooked was the Iraqi government’s goose. If he had turned around he would have seen with his own eyes the evidence that was literally staring us all in the face. The Americans were parked on the other side of the river, less than half a mile away, and they were there to stay. As he spoke, the American 7th infantry were wandering down the marble staircase in Saddam Hussein’s Jouhouriya Palace, taking video shots of the gold fittings sparkling in the bathroom and lazing by a fountain in the courtyard. Saddam’s seat of power had begun to fall apart. Machine-gun fire crackled, the river banks burst open in puffs of grey smoke as mortar fire picked off Iraqi defensive positions dug in along the lazy curve of the Tigris. Four armoured personnel carriers swung along the boulevard. The attack and the depth with which it struck into the capital took us all by surprise. Not least the Iraqi troops. Most of them fled in a terrified shock. Dozens of them leaped from their trenches and ran; leading the pack was someone still in his underwear. This may have started as a raid but by afternoon it was clear the American troops were not moving and the government had lost control of the west bank of the city.

The next day, after weeks of reporting on the terrible toll the conflict was taking on this city and its people, the war knocked on the door of the world’s media with a vengeance. Artillery fire had been shaking Hotel Palestine since before dawn. That morning the air above the city had been ripped open by the roar of A-10 tank busters swooping across the sky. They had a truly terrifying power. The planning ministry, already hit several times with missiles, was riddled over and over again by bursts of fire that were stupefying. Each time it was hit, the building fizzled like a firecracker as it was peppered with rounds. Two tanks appeared on the Sinak bridge slap bang in the centre of town. For a while they just sat there, triumphantly signalling the tightening grip the US had on the city. Then one of them inexplicably swung its turret around and to our horror slammed a round into the office of Al Jazeera, the Arab satellite television channel.

Just an hour later I was standing with my BBC colleagues on the lower roof of Hotel Palestine. For a good half an hour, the city around us had been quiet. Then there was an enormous bang and we were showered by shrapnel and pieces of concrete. Something had slammed into the side of the building on the 15th floor where the Reuters news agency had based its office. Minutes before, a French TV channel had been filming from a balcony when it recorded one of the two tanks lower and aim at the hotel. And then the tank fired. It ripped into room 1502, killing cameramen from the Reuters news agency and Spanish television and injuring three other Reuters staff. Back in Washington, Victoria Clarke, assistant secretary of defense for public affairs, was wheeled out to defend the indefensible. "War is a dangerous, dangerous business," she said. "Our forces came under fire. They exercised their inherent right to self-defence." This statement is untrue. I can say that because I was there. Along with dozens of other colleagues, all of whom heard nothing before the shell whacked into the two buildings.

We journalists understood all along that we would be used by the authorities as some kind of protection for their propaganda machine and so, in the eyes of some, that made our location a legitimate target. But on Tuesday we lost our currency as "human shields" and by the following morning they were all gone. But left behind and still stuck in the middle were the ordinary people of Baghdad. Those America had come to save by dropping missiles on their city were still dying in great numbers. Earlier in the week, crowds of people were having dinner around the al-Sa’ah restaurant in the residential district of al-Mansur. It’s a nice area and before this day it had only a walk-on part in the war after Saddam was shown strolling along its streets in one of those ‘made for TV’ scenes of adoration broadcast to the masses on Iraqi state television. But this broadcast earned 14 people a death sentence. The Americans took another ‘target of opportunity’ and left a crater eight metres deep and 15 metres wide in their wake.

For now much of the bombing has stopped and the people of Baghdad are waiting to see what their ‘liberators’ are going to deliver. Their old leader is gone, to who knows where. In truth, his whereabouts are almost irrelevant; he has lost power and the country is no longer under his command. But the fighting is still going on and apart from the small pockets of the city being directly administered by the US troops, no one is in control. If the Americans are to win the peace now that the war is nearly over, they must hand this country back to its people and back to a government that genuinely reflects their aspirations and expectations. They are proud to be Iraqis even if they are ashamed of some of the things that have been done in their name.

Perhaps this sentiment is best explained by a conversation overheard by one of my colleagues on that historic afternoon minutes after the great statue of Saddam Hussein had been dragged to the ground. It was between a young Iraqi and one of the young men who had just occupied his city. "I am now able to exercise my right to freedom of speech for the first time in my life," the young man said. "We want you to leave here as soon as possible."