Enthused by Telangana’s creation, other demands for statehood have been renewed

After a period of relative quiet, the hills of Darjeeling are brought to a simmer once again. Demonstrations and bandhs, which had become a thing of the past, have staged a comeback, with hundreds of local people joining leaders of the Gorkha Janmukti Morcha to voice their demand for a separate state. On July 30, a young boy tried to set himself on fire in Kalimpong—one of the three subdivisions of the Darjeeling hills—to bring national focus on the demand for a separate Gorkha homeland. In the aftermath of the decision towards a separate Telangana, the renewed demand for a separate state in Darjeeling is not an isolated one. As if on cue, similar demands for separate states have started coming up from the hills and plains of Assam, with the Bodos and Karbis both trying to revive their long forgotten demand, as well as from Uttar Pradesh, the country’s most populous and, with 80 LS seats, politically its most important state. Many believe that in the coming days, many more such demands from other parts of the country are also going to be raised.

Most calls for separate statehood are not new. Some, like that of the Gorkhas, who had asked for a separate homeland from the British in 1907 through the Darjeeling Hillmen’s Council, are over a century old. Others came in the wake of the formation of the first State Reorganisation Commission in 1953, while many more followed in subsequent years. But the Congress-led UPA government’s decision to carve out Telangana from Andhra Pradesh has rejuvenated many such causes that lay dormant for well over decades. However, after decades of struggle if Telangana can be a reality, what stops the others from pressing on?

At a rough estimate, there are about 15 demands for separate states. Some, like the Gorkhas, Bodos and Karbis, who had earlier accepted an autonomous council, are now demanding full-fledged states. But the demand for a separate homeland also varies in length and area. While the Gorkhas’ presence is limited within only the three subdivisions of Darjeeling and does not even comprise a full district, the Bodos’ demand spans 11 per cent of the state of Assam. Some demands, like that for Bundelkhand, involve not only UP but also neighbouring Madhya Pradesh. 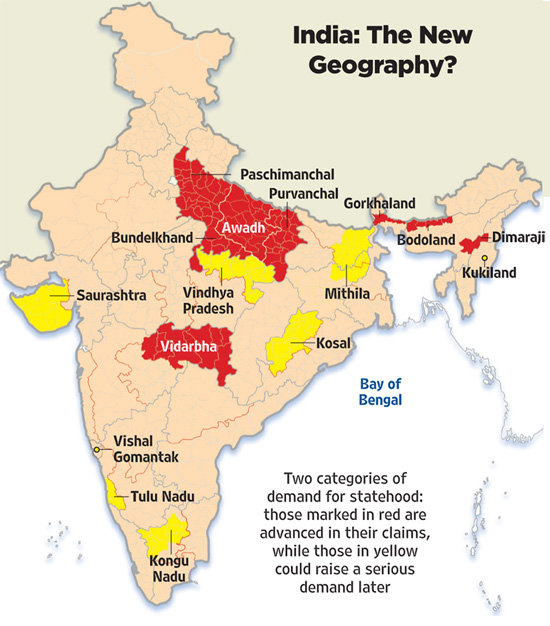 Political observers say that all claims cannot be taken with the same seriousness as many are trying to jump on to the bandwagon set in motion in the wake of the Telangana announcement. But at least five should be watched closely, as they could well turn into a major movement and turn into a political headache for the states concerned as well as the Centre.

While the creation of Telangana might be the model for other statehood demands, there’s bound to be stiff resistance by opposing forces.

The Gorkhaland movement would definitely top that list. Though the demand for statehood was made during colonial days, it came to the fore in independent India when former Indian army solider Subash Ghising launched the movement for a separate state in the 1980s. The three-year-long agitation was marked by large-scale violence—over 1,200 people were reportedly killed and properties worth crores destroyed—and finally culminated in an agreement between Ghising, the West Bengal government and the Centre with the formation of the Darjeeling Gorkha Hill Council in 1988. But after 23 years of calm, trouble started once again from 2004 onwa­rds, when Ghising’s former allies revolted against him, accusing him of betraying the cause, and floated the Gorkha Janmukti Morcha, sidelining him and reviving the demand for a separate state. There was relative peace for a few years after the new leadership entered into a fresh agreement and formed the Gorkha Ter­­r­itorial Council. The brief honeymoon between the Council members and chief minister Mamata Banerjee may have got over a year back on differences over allocation of funds and extent of autonomy, but the decision on Telangana has injected a new vigour and energy into the movement.

“We will intensify the movement and continue with it till we achieve statehood,” the gjm leader Roshan Giri told Outlook.

In neighbouring Assam, the Bodos, who had agreed to set up an autonomous council after a violent movement, are now showing signs of renewing their statehood demand. The hardliners among them, though currently in negotiation with the state government, have decided to settle for nothing less than a separate homeland. The Karbis, who were for years were satisfied with their autonomous council, have also decided to seek statehood. There are indications that a few more sections in Assam may pitch in with similar demands.

Interestingly, in UP, it was incumbent chief minister Mayawati who had formally written to the Centre, asking to split the state into Paschimanchal (the old Rohilkhand, or as Union civil aviation minister and Rashtriya Lok Dal leader Ajit Singh calls it, Harit Pradesh), Purv­anchal, Bundelkhand and Awadh Pradesh. As the main opposition in the state, she renewed the demand on July 31 for breaking up a state with a population of over 170 million people into four. “She will definitely try to turn this into a movement which in turn will yield votes for her,” social scientist Badri Narayan of the G.B. Pant Social Science Institute in Allahabad said. He pointed out that while Mayawati had formally raised the issue as CM, this time around she will adopt the Telangana model and try a grassroots movement, to gather overwhelming support for the states claimed.

While Telangana might well be the model, there are all indications that there is bound to be stiff resistance. To start with, Mulayam Singh’s ruling Samajwadi Party is against any division. He may try and garner support among the UP elites and try and consolidate his position. However, Mayawati will be joined in her move, at least for the creation of Paschimanchal in western UP, by Ajit Singh. But the two national parties, the Congress and the BJP, are yet to make their stand clear on UP. This ambiguity among parties is evident in West Bengal, Assam and elsewhere, where none of the major political parties is in support of a further division of their state. BJP’s Jaswant Singh won the Darjeeling LS seat with gjm’s help and promised party support for the Gorkhaland cause, but the state BJP unit emphatically gainsaid any such pledge.

Votaries for a separate Vidarbha, with claims as one of the older statehood demands, have also raised a cry for carving out a homeland from eastern Maharashtra. But every time a strong leader has emerged from the area to spearhead a movement for a separate Vidarbha, the leadership in Bombay has succeeded in coopting him within the state’s power structure. As a result, only those leaders who fail to make it big in Maharashtra or at the Centre seem keen to highlight the dem­and. Additionally, there is no major support among other political players for such a move. While the Shiv Sena is opposed to the creation of Telangana, Nationalist Congress Party leader and Union minister Sharad Pawar threw his weight behind the decision. Pawar’s position on the demand for a separate Vidar­bha remains ambiguous, as is the stand the BJP—otherwise vocal in championing demand for small states—might take on the issue.

So what do we expect in the coming days?

There is no denying that Telangana has given momentum to many of these demands and at least some of them would try and intensify their call for statehood by even resorting to violence to show ‘serious’ intent and get the Centre’s attention. But the political Pandora’s box that the Congress has opened up with the Telangana decision would only overflow in the run-up to the 2014 Lok Sabha polls.