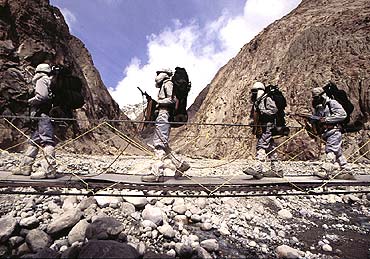 Sitting by the fireside, sipping Old Monk, veterans of Siachen on both sides still exchange exaggerated memories of its maddening heights, where battle heroics become rare feats of mountaineering and the elements are the ultimate arbiters of victory and defeat. What reverberates from the backslapping is regimental honour, pride and the art and skills of high-altitude soldiering. Reconciling some of those conflicting accounts of Siachen and adding history to descriptions of battle, Myra MacDonald presents the aptly-titled Heights of Madness in a rivetingly readable way.

Stories about Siachen, the highest battlefield in the world, are legendary, some ironic. Soldiers testing their manhood to impress girlfriends often become impotent, the only colour is white and the enemy isn’t Pakistan but the weather gods. Occasional skirmishes and artillery barrages tinge the white with streaks of red. Dementia is frequently induced by the obsession of not losing an inch of ground, but securing more, the higher the better, the sky being the...