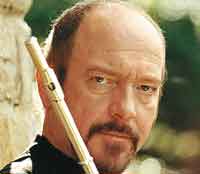 He'll be sitting on the floor, while you prance about. Will it jell?
It might appear disrespectful if I were to stand up and play but I can't sit cross-legged since I have an old knee injury.

Aren't your musical styles very different?
HPC, as I call him, plays very quietly, almost three feet from a mike.

How will you overcome this?
I will try and persuade HPC to use my spare microphone which easily fastens to his flute.

What preparations have you made?
I have prepared quite a lot of music. HPC plays in a certain key typical of Indian music, and so I'll just go with the flow, though...

How will you structure the performance?
I'm assuming we will substantially be let off the leash and we will be playing Jethro Tull music.

Will an attempt at fusion be a compromise?
It's not musical common ground that is important but musical differences. So, I hope we don't cosy up in bed together with a glass of Chardonnay!

When are you happiest while performing?
I'm happiest walking the tight-rope between organised western music and that other mysterious, spiritual, and improvised area of life.

Any thoughts on returning to play in India?
Ten years ago, we played in Bangalore, Madras and Bombay, when it still had its proper name. Now it's Mumbai. To me, it's a big overwhelming place.

How is it coming back to that big place?
No one could ever go in and out of Bombay without a turmoil of emotions.

For The Greater Common God