The nonagenarian on his tenure as Ambassador to India and his friendhip with Jawaharlal Nehru. 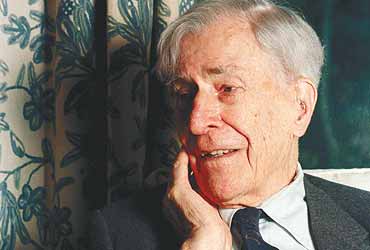 outlookindia.com
-0001-11-30T00:00:00+0553
Few in public affairs have been more resolute in their friendship with India than John Kenneth Galbraith, a Padma Vibhushan in 2001 and 90 years old this October. Galbraith, the Paul M. Warburg Professor of Economics Emeritus in the Department of Economics at Harvard University, is the author of numerous critically acclaimed books, including The Great Crash (1955), The Affluent Society (1958), The Good Society (1996) and Name-Dropping (1999). In this exclusive interview with Rahul Sagar, he reminisces over his tenure as ambassador to India (1961-63) and his friendship with Jawaharlal Nehru. Excerpts:

Your first visit to India was a consequence of your fortuitous meeting with Professor Prasanta Mahalanobis. Had you ever thought of visiting India before that chance meeting?
I had thought about it because I had initiated the first work ever done at Harvard on the developing countries, or the non-developing countries as they often were at that time! It was a course in economics at Harvard that focused on the poor countries ranging from India to Haiti, but I had not been to India before, which was something of a disadvantage. So when Mahalanobis told me he was gathering up people to come to India, and the book which I was working on (which later became The Affluent Society) was going very slowly, my wife and I accepted his invitation to spend a few months in India. It was my introduction to India and it was also the occasion for my first meeting with Nehru.

Your first meeting with Nehru was reportedly somewhat stiff. How did your relationship with him develop between that meeting and your eventual appointment as ambassador?
I made two trips to India before becoming ambassador. At that time my association with Nehru was friendly but brief and there was no continuing dialogue. When I came to India as ambassador, I had two things in mind: first, to deepen a personal friendship which had already begun; and to consolidate a very good international relationship between the Indian administration in Delhi and the Kennedy administration in Washington. The latter, I suppose, was the most on my mind because it was connected with all other matters, from economic development and peace-keeping to problems such as Kashmir. However, both my wife and I had a very close relationship with Nehru and often went to meet him or hosted him when there was no business at hand but rather when interesting people were visiting.

Would you say that the 1962 Sino-Indian war was the single most important event of your diplomatic career given your significant involvement in addressing the crisis?
I didn't place that much emphasis on it. There were a variety of symbolic issues but the real one was to demonstrate that India was our friend and would have our support, as well as to give some military assistance that was beyond the level of the purely symbolic and to have that well understood by the Indians. There were a number of other incidents that were of great importance, including the drama of military support coming in through Burma and the Calcutta airport, but the basic thing was the demonstration that we and the Indians were on the same side. It is fair to say that much of that—and much of the associated restraint—was my responsibility. In the film that has recently been made of those days (Thirteen Days), Robert Kennedy comes into the President's office and says, "Now the Chinese have attacked India," and the President, to my delight, replies, "Oh, we are leaving that up to Galbraith."

How close do you think we came to a new formal strategic understanding between India and America?
Not at all. Washington's objective, to the extent that it was formulated, and my own personal objective, was not to form any new military alliance, but to certainly let the Indians know that we were on their side as regards any overt military problems.I am not suggesting that it was any sort of heroic act; it simply had to be done. There were, of course, Americans who thought we had a great new military ally in the subcontinent and the only thing I had to do to that proposition was to keep it under control and that was not too much of a problem.

Would it be fair to say that Nehru enjoyed your friendship because it provided him a chance for social and intellectual companionship beyond the image of world statesman?
I wouldn't put too much emphasis on that. Nehru was very much a person in his own right and while he was subject to discussion, he was not subject to persuasion. I had my agenda and where our agendas coincided, things worked and I got a measure of credit for it. However, when there was no possibility of agreement, this was not a source of trouble because knowing that, I did not press it. Much better not to press it than have it turned down.

In Name-Dropping you write that your friendship with Nehru was based on conversation and books. What were the conversations about?
We had wide-ranging conversations over Indian history, American positions on international issues, Kennedy and extending on to the arts, economics and particularly to the fact that we were both identified with Cambridge University and Trinity College. He also had an interest in theatre and Hollywood; I had an interest in Indian art.

Can you recall the books that the two of you chose to discuss?
Oh, that is easy: it was my own books! He had read them and I had no trouble talking about them. (Laughs) Actually, we talked less about books and more about motivations and thought, i.e., what moved countries such as the US and India. Those discussions, some of which took place at his house and some at mine, were not much confined to particular books; it was ideas we talked about. He was interested in drama and motion pictures and we shared conversation on all those matters. Indeed, I would sometimes have to get briefed myself!

Nehru shared a wonderful relationship with some of the most captivating women of his generation, including Jacqueline Kennedy. What was it about Nehru that allowed him to form these unique relationships?
There was no doubt about that. Nehru was a recognised, active, articulate and intelligent head of one of the world's great countries. That was a source of enormous attraction to visitors generally, including women. He, in turn, was attracted to good-looking women. This was therefore something that both Nehru and his visitor enjoyed.

Weren't these guests intimidated by his stature?
Not in the least. They saw him as one of the greatest figures of the time, and also an articulate and interesting source of ideas, information and experience, one who could take them back to life in England, to life under the British and a whole range of history with which he had a first-hand association. This is particularly important in theatre and the arts and Mrs Kennedy had an intimate association with both, especially the arts. At the time Mrs Kennedy visited, our embassy was under construction, so we housed her in a house we had borrowed from Pan Am. Nehru, however, thought the house was inadequate and moved her into his own house whose garden then became the centre for conversation, which was wholly unofficial. Those of us concerned with the more sombre aspects of diplomacy weren't even invited.

The first two meetings between President Kennedy and Nehru are infamous for their awkwardness.
In the first meeting, Kennedy had talked but Nehru was silent. Kennedy was therefore a bit disturbed that he wasn't making his point and wasn't hearing back from Nehru.Later meetings were more agreeable and after one of the meetings with Kennedy, Nehru told me he didn't feel he had done very well in his talk with Kennedy!

What did Nehru make of his visit to the Kennedy White House? After all, following his first visit during the Truman administration, he was famously quoted as saying that "one should never visit the United States for the first time".
You must remember that Nehru was very much a figure of his early education and training. As I recall of his second visit, at the first dinner he had with Kennedy, he was introduced to Bill Fulbright, the head of the Senate Foreign Relations Committee, and Dean Rusk, the Secretary of State, and some others, all of whom had been at Oxford. On the way back to the Indian embassy, he said to me in a half-amused manner: "All those Oxford men—all of them are from Oxford!" Then he said to me, "I am a Trinity man, you're a Trinity man—the world belongs to Trinity men." It was all a good joke and not to be taken seriously.

Would you say the India that awarded you the Padma Vibhushan is still the India that was Nehru's tryst with destiny? Nehru's vision of a secular India, for example, is under ferocious assault...
In all countries, including the US, there are strongly-welcomed actions, positions and ideas, and some that are otherwise. One would not be a friend of India if one agreed with everything the Indian government says and believes. But on the whole, over a lifetime, I see the progress of India as perhaps the greatest I have been able to identify. There have been other developments which are important, including the demise of the Soviet Union, but India has always been my model of successful economic development. As we talk, I am particularly concerned that nothing brings that to an end in a conflict between India and Pakistan. There should be no doubt about the fact that one of the great failures of the 20th century was the division of what would have been a truly great country into three different parcels.

(Rahul Sagar would like to thank Ms Sylvia Baldwin and Mrs Catherine Galbraith for facilitating this interview.)