I Was Your City Then

Vilas Sarang, visceral writer and once toast of Bombay, has vanished into its entrails 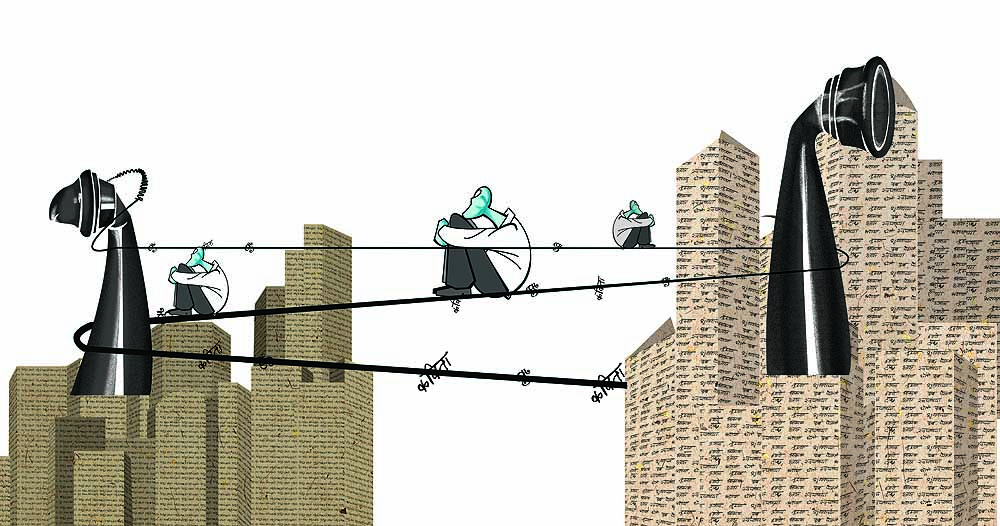 Once upon a time, I was one of your most famous writers, a teacher at Bombay University, a man whose name invariably featured in discussions of avant-garde literature from India. But then one day Vilas Sarang’s books were no longer read, he was not discussed on Facebook or Twitter, and only a few old-timers remembered him.

Readers of The Dhamma Man, a modernist retelling of Gautama Buddha’s life, will recognise that the same shift in subjectivity happens in the first two sentences of the novel, one of its many technical sleights-of-hand. Sarang wrote this quirky little book in English, but he is also a poet in Marathi, part of a group of writers including Kiran Nag­arkar, Dilip Chitre and Arun Kol­a­t­kar who worked in two languages. The others of that generation have done well for themselves. Kolatkar is one of only three Indians (along with Nirad C. Chaudhuri and Upam­anyu Chatterjee) to be published in the prestigious New York Review of Books Classics series; Nagarkar won the Sahitya Akademi award for Cuckold; Chitre will always be remembered for the famous poem of his that Om Puri recites in Govind Nihalani’s film Ardh Satya.

Sarang vanished. Fair Tree of the Void, his landmark collection of stories (1990), is now out of print. Even a good bookstore like the Strand in downtown Mumbai did not have a single book by him when I checked a few weeks ago. Hardly anyone in the literary world has seen him in years. A well-known poet, an old friend of Sarang’s, thought that he still lived somewhere in Kandivili. I was given a phone number for Sarang, but no one picked up when I called.

I grew interested in Marathi writers in my fourth year in Mumbai, when a friend gave me Gangadhar Gadgil’s novel Prar­ambh. My friend, a north Indian screenwriter, had arrived here during the MNS campaign against Bihari taxi drivers—an experience that made him see Maha­ras­h­trians ganging up everywhere against him, even in Bollywood. Then someone in the film business gave him a translation of Prarambh, and one evening, in the manner of someone doing a duty to a fellow migrant, he passed it on to me. Prarambh should be made required rea­ding for anyone who moves to Bombay. Set in the middle of the 19th century, it tells the story of how Mah­arashtrian migrants, pouring in from places like Pune, were pioneers in matters like women’s education and the establishm­ent of a free press. Centred around the fig­ure of Jagannath Shank­arseth, a Mar­athi-speaking tyc­oon who made his fort­une in the 1860s cotton boom, Prara­mbh shows how a liberal, tolerant Maha­rashtrian majority, eager to work with communities like the Parsis, was integral to the founding of cosmopolitan Bombay.

Sarang’s landmark collection, Fair Tree of the Void, is out of print. Even the Strand didn’t have a single book by him.

The day you start learning Mara­thi, a table will be added to every cafe in the city. When a friend arranged for me to take a few Marathi lessons, it was as if the audio track of my life in Bombay switched to stereo. Until then, I had been eavesdropping in on conversations in Kannada, Tulu, Tamil, or Hindi—but now, everywhere I went, whether it was the Oberoi or the Goethe Institut, someone was spe­­aking Marathi. Bom­bay’s literary landscape too grew richer. I discovered that Bhaktavar, a building in Colaba where Ratan Tata lived for many years, was also where Kolatkar and Nagarkar met when they worked in advertising. Now it see­med impossible that one could make any sense of Mumbai without Marathi literature, which has chronicled just about every facet of the city, from Girgaum’s mill workers to the cafe int­ellectuals of Kala Ghoda. This last venue lent its name to a book of poems by the greatest of the Marathi-English bilingual writers. Arun Kol­atkar, who died in 2007 of intestinal cancer, led a troubled existence, and the city of Bombay that eme­rges from his writing is funny, vivid, inf­ernal: his poetry can make even Suketu Mehta’s Maximum City seem bloodless.

Vilas Sarang was one of these bilingual Marathi-English writers, and he was probably the strangest of the lot. He was born in Karwar in 1942, and I thought at first this meant he knew Kannada (alas, the hero of Musk Deer, born in Karwar, has no memory of his hometown). He wrote Marathi poetry and novels in English, such as Dhamma Man. But his short stories are what we remember him for. Consider the figure of Bajrang, who believes that he is actually a bird called the Great Indian Bustard. We are told almost nothing about Bajrang’s past. At times, he appears to be a normal person, a door-to-door salesman, a reader of Camus, and a devoted lover; at other times, he seems clinically deranged.

If the influence of Kafka is a bit too obvious in some stories, all of them contain sumptuous descriptions of Bombay: lovers are making out near crematoria, and men are washing their bottoms at the beach in balletic motions, timing their dips to match the inflow of the ocean’s waves. Sarang was also a gifted literary critic, and the int­ernet yields a few tantalising quotes on how he tried to balance his English and Marathi literary selves. The more I grew interested in meeting him, tho­ugh, the more it appeared that Sarang had simply vanished from the face of the earth, much like one of his own peculiar literary creations might have done. Things made more sense only when I heard that he had suffered a stroke a few years ago and had since become reclusive. Still, I wanted to reach him bec­ause this man, born in Karwar, eloquent in both English and Marathi, might still have the answer to a question that was nagging at me.

The Bombay described in Prarambh was already disintegrating in the 1950s, when the first disputes arose between Gujaratis and Maharashtrians over the possession of the city. Cooperative, cosmopolitan Bombay broke down completely on October 30, 1966, when Bal Thackeray launched the Shiv Sena at Shivaji Park. You can provide many explanations for why its infrastructure is a mess, why speculators are allowed to drive its land prices so high, why slum redevelopment rackets and haphazard const­ructions are the norm: you can say that there is a “governance deficit,” that the municipal commissioner, the city’s CEO, is not an elected official, that the city gives more to the state than it gets back, that the state gives more to New Delhi than it gets back. These are reas­ons for Mumbai’s decline. But more important than any of them is a deca­des-old cultural war between a part of its Marathi-speaking population and everyone else in the city—a war that has ensured a group of corrupt men can keep running Mumbai, no matter badly how they wreck it, as long as they keep it Marathi. Like everything else to do with Mumbai, the issue is complicated: many Marathi speakers oppose parties like the mns, and the Maharashtrian identity is a complex one, riven along caste and regional lines. All this is true, but what is also true is that as Mumbai’s municipal elections draw to a close, on the final, all-important days of polling, what the candidates yell from their podiums is not a promise to improve trains or roads, but “to cut the hands of anyone who tries to separate Mumbai from Maharashtra”.

Readers of The Dhamma Man will recognise the same shift in subjectivity in the first two lines, one of its many sleights-of-hand.

Kumar Ketkar, a respected newspaper editor, was one of those present at the original Dusshera Day rally that founded the Sena, before becoming disillusioned with Thackeray. I met him in his office in Mahim to ask what I wanted to ask Sarang: how is it that the same public that nurtures stylish and progressive writers like Sarang and Kolatkar can also support political parties as crudely jingoistic as the Shiv Sena? In reply, Ketkar observes that the Marathi cultural elite that impresses outsiders like me is a small one, operating in a limited political sphere; and then, somewhat hesitantly, in the manner of one not wishing to offend a guest, questions the rigid dichotomy I am proposing between “cultured person” and “nativist”. English and Hindi are taking over the city at such a pace, he notes, that even liberal Marathi speakers sometimes feel beleaguered in Mumbai.

After weeks of trying, I still haven’t managed to reach Sarang, so one day I decide to take the train to Kandivili and just ask around for him. Seven years ago, when I moved to Mumbai, it was a city where things like this could happen. Today, however, in the shops on either side of Kandivili station, no one knows of a writer named Vilas Sarang. I give up and go to the Payyade Sports Club, a cricket club set up by migrants from South Canara, which has produced many Ranji players for Mumbai. As I watch a cricket match, the sound of Tulu being spoken all around reminds me it is time to visit the Karnataka Sangha in Matunga, home to the city’s biggest library of Kannada novels.

The Sangha, when I do get there, is in disarray. The librarian is running around because she has heard that a surprise inspection by officials of the Maharashtra government will happen any time now. The news confuses me, because I thought that it was the government of Karnataka that paid for the maintenance of the Sangha. No, the librarian tells me—the cultural centre and its hall are funded by Bangalore. But the big library in the basement and all its books are paid for by an annual grant from the Mantralaya.

I can’t believe it. Does she mean to say that all through a bitter border dispute over Belgaum, the Maharashtra government has been funding this library so that Kannadigas can be helped to preserve their language in Mumbai? If the Maharashtra government was sponsoring this library, why, it must also be underwriting libraries in other cultural centres around the city, like the Tamil Sangam in Sion. Despite all these decades of nativist politics, Gadgil’s Utopia, in which tolerant Marathi-speakers work with other communities to create a progressive metropolis, has not entirely died out, then. The librarian and I search the compound for missing Kannada books; just across the road people are talking in Marathi. It seems to me then that all we have to do is shout to them to come over, and we could fix this whole business of the Decline of Bombay this very afternoon. So why don’t they cross the road and come to us, why don’t we cross the road and go to them?

Vilas Sarang might know the answer. But he isn’t taking my calls.

(Adiga is the Booker Prize-winning author of The White Tiger)

Autocrats Of The Talking Table