'I Want To Bring One Crore Acres Under Irrigation'

Steadfast in his commitment to agriculture, Andhra Pradesh CM tells Outlook about his plans to revive the sector 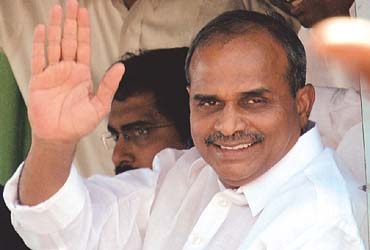 When I came to power, I didn't lose a minute in stating that irrigation gets top priority in my budget. Even my cabinet colleagues expressed doubts on how we would mobilise the money. But we have met our irrigation budget in the first two-and-a-half years and will continue to do so for the rest of the term. My ultimate goal is to bring one crore acres of land under irrigation by taking up 51 irrigation projects. The state will be transformed.

As an Opposition leader, you vehemently opposed Chandrababu Naidu's policy of borrowing from the World Bank. Why is your government accepting such loans?

I am not against borrowing from the World Bank. I am against bowing to all kinds of conditions imposed by them. We have continued with free power to farmers despite scepticism and criticism. In fact, we are offering free power to 95 per cent of the 24 lakh agricultural pumpsets. And I guarantee that free power will continue.

How did you convince AICC president Sonia Gandhi about including free power in the poll manifesto?

She asked us to go into minute details and see if free power was actually possible. Once convinced, she gave us her nod. She did tell me, "Once you make promises, you have to fulfil them at any cost." This is what my government has been doing. It has been possible by reducing transmission and distribution losses and reducing subsidies given to power utilities.

You seem to have regained your equation with the bureaucracy. In the first year, there was criticism of babus slipping out of your hands.

I think politicians need to do their own job and bureaucrats theirs. But it's possible to get work done by bureaucrats by inspiring them in the right fashion.

Yes, I go to bed at 10.30 pm and am up by 4 am. I do my exercises and yoga and am ready to work by 5 am. I also take a nap after lunch. Naidu would say he worked for 16 hours a day. Is it possible? Simple mathematics shows that a man requires a minimum of 8 to 9 hours for himself and his family. In fact, I often used to pull his leg about his 16-hours-a-day work schedule.

From being an aggressive Rayalaseema politician, you seem to have come a long way. Do you think you're a more polished politician?

I still don't call myself a diplomatic politician. In fact, my frankness is both my strength and weakness. But I am definitely more experienced now.

Mr Down To Earth