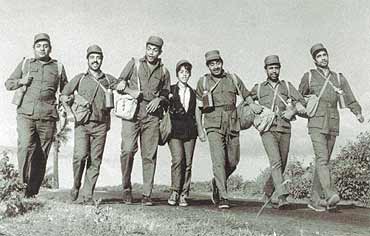 In the calendar of Indian nationalism, landmark dates have a habit of ending with 7. So, 1757 and the battle of Plassey serve as the symbolic beginning of colonial rule while a hundred years later, 1857 marks the last time that colonialism was violently challenged on any scale. Independence ought to have happened in 1957 but history, uninterested in round numbers, arranged for it to occur 10 years earlier in 1947. However, for the purposes of this essay, which is concerned with the many ways in which nationalism is 'done' in Bombay's cinema, 1957 is a milestone, because it was the year that Mehboob Khan made Mother India.

But the rash of patriotic films we have seen in the past decade, from Border (1998) to Namaste London (2007) with Sarfarosh, Lagaan, Gadar, Rang de Basanti, Mangal Pandey, Fanaa, Swades and Kargil LoC sandwiched in between, aren't the children of Mother India; their family trees lead to the patriotic films of the '60s, films that were made in a darker time than the '50s, in the aftermath of war and defeat.

Patriotic cinema in India was goosed into life by the savage humiliation that India and Nehru suffered at the hands of the Chinese in the war of 1962. The pioneer of the contemporary nationalist film isn't Mehboob Khan: it's Chetan Anand who made India's first (and best) war film in 1964, Haqeeqat. It was a film about the war with China and as such had to be a tale of heroic defeat and martyrdom. It featured Dharmendra in one of his best early roles, but what really marks it out is the quality of its music, specifically the heroic 'Kar chaley hum fida, jaan-o-tan saathiyon', penned by Kaifi Azmi. 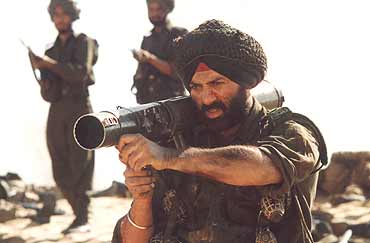 If J.P. Dutta's Border has a pedigree, it must begin in this black-and-white film and it's appropriate that Border's main star, Sunny Deol, is Dharmendra's son. If Haqeeqat advanced Dharmendra's early career, Border gave Sunny Deol a new lease of life as a film star by putting his machismo at the service of the nation.

A film made a year after Haqeeqat, in 1965, flagged off the nationalist career of Manoj Kumar, the undisputed pitr of cinematic patriotism. This film was Shaheed, a black-and-white retelling of the Bhagat Singh story, which, 40 years later, inspired Rakeysh Omprakash Mehra's 2006 hit, Rang de Basanti. The debt is acknowledged in the title of the later film which refers to a song from Shaheed, 'Mera rang de basanti chola' and one of the notable innovations of Shaheed is the Punjabi inflection of the new patriotism, showcased in the song 'Pagdi sambhal jatta' sung by Mahendra Kapoor.

One possibility was the anti-colonial nationalist film. Shaheed was Manoj Kumar's take on colonial deshbhakti. Since then, in the past decade, we have had Lagaan, Mangal Pandey and Rang de Basanti in this sub-genre. All three films have Aamir Khan as the main male protagonist, which makes him, along with Sunny Deol, an unlikely claimant to Manoj Kumar's persona of Bharat. 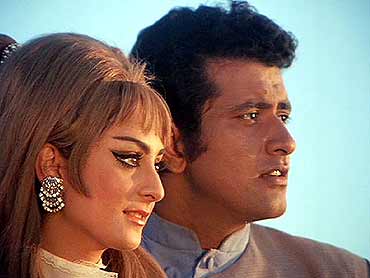 The other way in which nationalism was done was the anti-West film that tried to purge Indians of the permissiveness of the West. Purab aur Paschim (1970) was the defining film here with Saira Bano cast as the deracinated, foreign-returned Indian girl, and Manoj Kumar playing the anchored, authentically Indian foil. The power of this stereotype can be judged by the faithfulness with which Namaste London updates Purab aur Paschim for 2007. Katrina Kaif plays the Saira Bano role: interestingly, the authentic Indian in both cases is the male hero while the rootless cosmopolitan who needs a patriotic enema is the flighty heroine. A variation on this theme is played in Swades where a successful, well-meaning NRI scientist is brought to his nationalist senses by love and an immersion in the collective life of an Indian village. 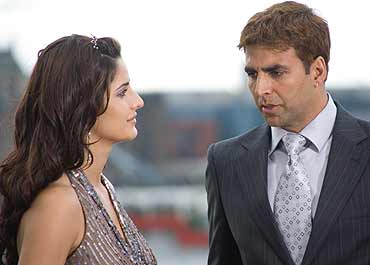 Finally, the third nationalist formula is the anti-Pakistani film. While Upkar was made in the wake of the 1965 war with Pakistan, it isn't, to be fair to Manoj Kumar, a film powered by anti-Pakistani chauvinism. Manoj Kumar does go to war in the course of the film, but that's incidental to the story, which does a thorough job of glorifying the organically good and patriotic peasant. The full-blown anti-Pakistani, anti-terrorist patriotic film had to wait upon the steady deterioration of Indo-Pak relations through two wars (1971 and Kargil), the worsening crisis in Kashmir and the cycle of pogrom and terroristic violence India experienced in the '90s.

Mani Ratnam's Roja (1992) was one of the first films to exploit the patriotic possibilities of terrorism in Kashmir. Sarfarosh (1999) and Fanaa (2006) both deal with the malevolence of Pakistan and its attempts to stoke terrorism in India. In Sarfarosh, Aamir plays the upright Hindu police officer who defends his Muslim subordinate against insinuations of disloyalty to India and foils a Pakistani plot while in Fanaa he is the Kashmiri nationalist misled by his Pakistani handlers into murderous terrorism. Fanaa's defining patriotic act is left to Kajol, his lover and the mother of his child: she shoots him in the greater cause of India as he tries to reach a nuclear trigger to his terrorist masters.

We began this survey of patriotic cinema with Mother India, only to abandon the film arguing that despite its iconic position in Hindi cinema, the patriotic films that came afterwards didn't take their cue from the difficult, austere nationalism of Mehboob Khan's film. The story of the film centres on Radha (Nargis), a peasant's wife. They are married when India becomes independent and thus Radha's destiny is joined to this life of the young republic. But it's a freedom that gives little to the new couple: their lives are mortgaged from the start because Radha's mother-in-law had taken a loan to finance the marriage and the moneylender's terms meant life-long indebtedness.

The nationalism of Mother India consists of Radha's integrity in the face of relentless adversity. She loses her husband, her mother-in-law, her youngest child, her crops and still she labours on, raising two sons to adulthood. Finally, she kills her own son who had killed the villainous moneylender, Sukhilala. She kills him because violence and vigilantism are immoral in the young nation's brave new world.

Radha is committed to the ideals of the new republic: she tenaciously holds on to the belief that individual integrity helps build a foundation of public virtue on which this nation can be properly founded. And her faith is borne out because at the end of the story she inaugurates a new canal that brings precious water to the village.

Mother India did have nationalist children, only not the films I've mentioned. Perhaps the most rigorous realisation of the idea that individual integrity is public virtue is Hrishikesh Mukherjee's film, Satyakaam. Made in 1969, it has Dharmendra playing an engineer named Satyapriya, a man so idealistic that he can't alloy honesty with even a hint of baseness to ease his way in the world. He marries a woman made pregnant by a villain and challenges corruption with such uncompromising loftiness that he is, inevitably, ground down by a corrupt duniya. 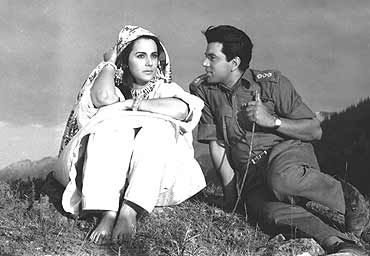 Satyakaam was a fine film but a box-office dud because martyrdom in slow motion is hard to watch. For decades, the Mother India/Satyakaam model had no takers, till a young director, Raj Kumar Hirani, found a way of fusing moral consistency with human fallibility, of taking the martyrdom out of goodness and replacing it with good-humoured swagger. He pulled off this remarkable trick in Lage Raho Munna Bhai, a feelgood film in which a Mumbai goon, Munna, thanks to visions of the Mahatma, finds a method of dealing with the villain that's grounded in a comic, sometimes profane, take on satyagraha: Gandhigiri, not goondagiri. I'm not sure Mehboob Khan or Hrishikesh Mukherjee would recognise Lage Raho Munna Bhai as the spiritual heir to Mother India and Satyakaam, but that's what it is: the reinstatement of private virtue as the glue that holds good nations together.

But in the end, it's worth saying that even in its less satvik, more militant forms, Hindi film nationalism has remained alertly secular. A little over five years ago, Gadar was criticised by liberal critics for a chauvinism which they thought shaded into anti-Muslim bigotry. The film is a love story between a Muslim girl and Sikh man at the time of Partition which morphs into a Ramboesque cross-border adventure as Sunny Deol, the Sikh hero, crosses into Pakistan to rescue his wife from her Pakistani parents who are holding her there against her will. The film opens with the slaughter of Hindus and Sikhs in a train as they flee a world made suddenly murderous by Partition, and the Muslims doing the killing are pictured as ravening devils. Just as you begin to wonder if the film is as bigoted as it was reported to be, Muslim savagery is balanced by a similar scene of Sikh and Hindu violence.

The film is, in fact, a lesson to the secular 'intellectual' who condescends to the ideological reflexes of the Hindi film. Gadar is a pretty crude action film, but it has the implications of communal conflict carefully sorted out. For example, Amisha Patel, who plays the Muslim girl Sakina, marries Tara Singh (Sunny Deol) and voluntarily converts to his faith. Later in the movie, when she's being held against her will in Pakistan and Tara Singh has made his way there, her father, who hates the idea of his daughter having a Sikh husband and child, makes Tara an offer that he thinks he'll have to refuse. One, Tara will have to stay on in Pakistan. Sunny Deol thinks for a moment and grimly nods acceptance. Then the father (Amrish Puri) plays his ace: Tara and his son will have to become Muslims. Since the viewer knows that Sakina converted to Sikhism to marry Tara Singh, he's wide awake at this point, tense with wondering what answer Tara will return. Tara trumps the father's ace: I accept Islam, he says in quiet, measured tones. Give the director Anil Sharma credit: in this romance, both Sikh and Muslim are willing to give up exactly the same things for love. The deal-breaker for Sunny Deol is not Islam: it is the perverse demand that he shout Hindustan Murdabad: an insult to his nationalist honour rather than his religious being.

Why is this important? It's important because Gadar was released in 2001, at the end of a decade that had seen horrifying sectarian violence in the wake of the destruction of the Babri Masjid. That a film of that time was so scrupulous in crossing its secular t's and dotting its sectarian i's is a tribute to the bred-in-the-bone pluralism of the Bombay film—the unpartitioned homeland of the people of al-Hind.

(Mukul Kesavan is a well-known writer and film buff.)

No Place To Land