In an interview to Outlook, Madhya Pradesh Chief Minister Shivraj Singh Chouhan says he sees no anti-incumbency because his party has worked hard in the state. 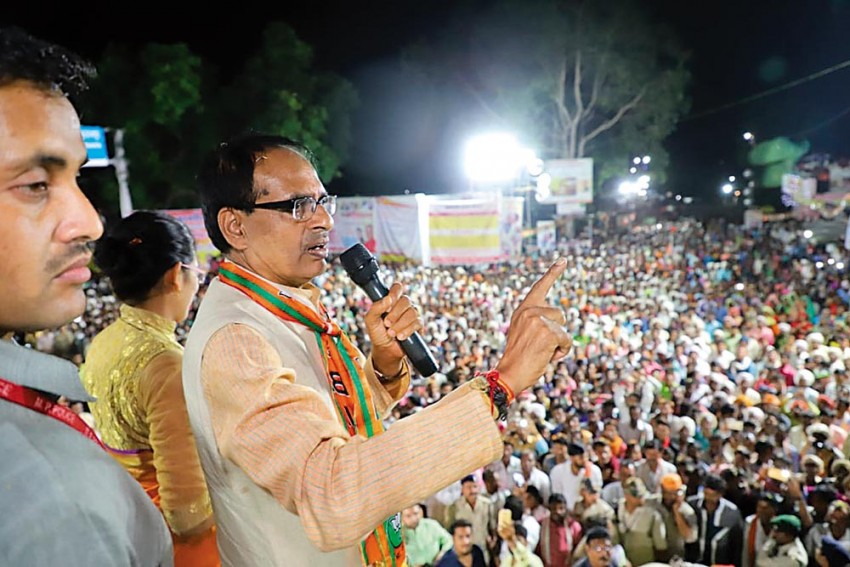 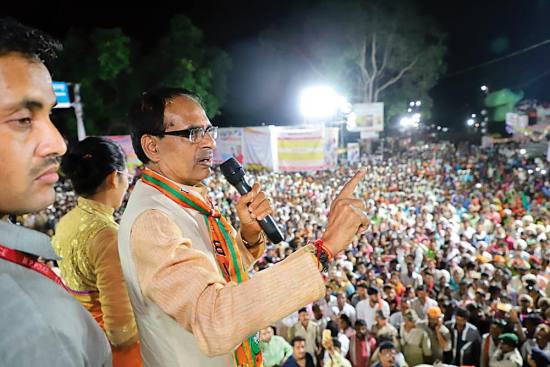 Shivraj Singh Chouhan, 59, has been  chief minister of Madhya Pradesh for three consecutive terms; that is nearly 13 years at the helm of affairs in India’s second largest-state. But he is not done yet. With ass­embly polls due by the end of the year, Chouhan is once again on the road, braving the hot and humid weather to campaign relentlessly across the state. The man who identifies himself as the benevolent ‘mama’ (maternal uncle) of the voters is leaving nothing to chance in wooing his electorate.

For the last two months, Chouhan has been intermittently criss-crossing the state’s 51 districts atop a high-tech van in the course of his Jan Ashirwad Yatra, add­ressing numerous roadside rallies. The Congress—the principal opposition party—hopes to unseat him this time, but the chief minister shows little signs of nervousness. As he set off for another day of canvassing from Tendukheda—a speck of a town some 150 km from Jabalpur—Chouhan spoke to Outlook Editor Ruben Banerjee on how confident he was about being re-elected and what his roadmap for governance was. Excerpts:

You have been chief minister since 2005. So you must be up against strong anti-incumbency this time?

I don’t feel there is anti-incumbency, because we have worked hard for so many years. People can see the work being done by us. There is no match. Irrigation of land has increased from 7.5 lakh hectares to 40 lakh hectares. We are working to achieve the target of 80 lakh (hectares). We have laid a network of roads. When people see that work is being done, there is no anti-incumbency. Our second speciality is providing social justice to those who have been left beh­ind—the poor and backward—which is important for a welfare state. That’s why there is no anti-incumbency.

It’s been 2–3 months since you began the Jan Ashirwad Yatra. How has the response been? How long will it continue?

The response has been great. You should stay back and see. We are getting people’s affection and blessings. It was scheduled to end before September 25, but due to some circumstances we couldn’t organise it for a few days. It may now go on till October 15.

Can you improve on the last assembly election tally?

The BJP will form the government with a thumping majority. The people of the state are with us. We may even do better (than the last time).

What about the Lok Sabha elections? How well can the BJP perform?

Our performance during the last Lok Sabha elections was the best. We won 27 of the 29 seats. We are trying to win all 29 seats this time.

You implemented various schemes such as the Ladli Yojna scheme for girls. Several of these have also been replicated at the national level. How much benefit are you likely to get this time for implementing these schemes?

"The BJP will retain power with a thumping majority. The people are with us. We may even do better (than the last time)."

The schemes that we implemented in Madhya Pradesh were not for vote banks. They were adopted keeping in view difficulties faced by the people. We implemented schemes to help people overcome the problems they face. For example, the Prasuti Sahayata Yojana was implemented for village women, who would go back to doing manual lab­our soon after childbirth. We realised that they too needed some rest.

The Ladli Lakshmi Yojna, which aims to ameliorate the financial future of girls, was implemented because the girl child was considered a burden. The schemes were implemented keeping in view problems faced by the people of the state.

Several schemes implemented by your government focus on women and girls. But there are rising incidents of crimes against women. And the Opposition is very aggressive about it.

We have done a lot of work for women empowerment and welfare. There are a few things for which efforts will have to be made. In Madhya Pradesh, an FIR is filed for each incident. One of the easiest ways of not reporting a crime is not to register a FIR. Madhya Pradesh was the first state to enact the death penalty in rape/harassment cases. That’s why we focus on strict punishment, welfare schemes and the welfare of society. We implemented schemes like Beti Bachao long ago. All these efforts have been on.

But as of now, are you satisfied with the state of law and order in MP?

"We ended terrorism and controlled Naxalism. We demolished the SIMI ­network. We ended all these problems."

When I first became chief minister, there used to be the terror of dacoits. There were cases of massacres. Abduction had become a business. On the one hand there were dacoits, and on the other there was Naxalism during the Congress’ rule. During the Congress’ rule, a minister’s neck was chopped off. We ended terrorism and controlled Naxalism. We demolished the SIMI network. We ended all these problems. But there are certain crimes that take place in society. We are making every effort to stop them.

You keep talking about farmers, and loans being extended to them at zero per cent. Despite all this, why did MP witness farmers’ agitation last year?

If you ask anyone about farmers in Madhya Pradesh, they’ll tell you—and even farmers believe that whatever has been done for them now hadn’t been done earlier. The farmers are satisfied.

Why did Mandsaur happen?

I have said this many times in the past. The agitation in Mandsaur was not a farmers’ agitation. There were some other people behind it.

It is being said by sections of the media that upper castes are unhappy with you, and that there is a clear divide. They are angrier since your gov­ernment pet­itioned the Supreme Court against the amendment to the SC/ST Act.

Social equality has been our guiding principle. We have to move ahead by taking everyone along. No divide exists.

How serious will the challenge be from Congress this time? Now that Kamal Nath is the MPCC president, who would you have preferred—Kamal Nath or Jyotiraditya Scindia—as your principal challenger?

I don’t see any challenge. Kamal Nath is busy spending money and Jyotiraditya Scindia is busy daydreaming. They ­suffer from disunity. In different parts of the state, I see different demands from Congressmen: some are asking for a Sci­ndia government, some others a gov­ernment headed by Kamal Nath.

Congress is in talks with the BSP to form an alliance in the state. Will it make any difference?

Forming an alliance means only two things: First, the Congress is no longer powerful. Second, it is heading in a self-destructive direction.

Which will be judged more in the next elections—your work or the work done by the BJP government under PM Narendra Modi at the Centre?

No one can compare himself with Modiji.

Who is more popular in Madhya Pradesh—you or Modi?