‘I Sat When They Sang The Anthem’

Why T.M. Krishna stands both inside and outside the canon 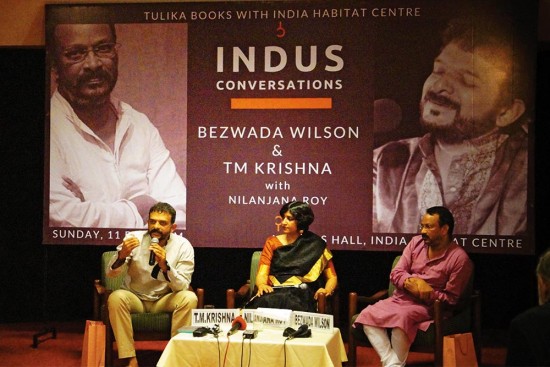 The sisters Ranjani and Gayatri would have likely been just priming up their first alapana when, just a few miles down in Delhi, the frontline classical vocalist T.M. Krishna was hitting a few complex notes of his own. Juxtaposed, they would have made a picture of meaningful contrasts. If the sisters offer a joyous, untroubled conformity—entirely in line with the tradition’s self-image—Krishna is the soft-spoken mutineer. Or perhaps the one who loves to open doors long shut in the Carnatic imagination.

Last year and this time, Krishna chose to skip the Margazhi season. And going by his Facebook post in December 2015, he perhaps won’t sing there anymore. The strongest veto can sometimes be made by silence. But why? In the basement of a modest hall this evening, as he warmed to a different kind of exposition—a socio-historical look at the Deccani system, initially systematised by composer Purandara Dasa five centuries ago—one could see the outlines of the task he has set for himself.

In musical practice, he’s a cultured extension of the canon—though beginning to experiment with format and aesthetic elements. But at the level of thought, he’s the insider who would rather rebel—one of its freest minds, who has the bandwidth to tease out the problematics (and politics) at the heart of the tradition. His polished hereticism may appear to the uninitiated to have no direct relation with aesthetics, but for him it obviously matters.

For one, Carnatic music is perceived by the public and practitioner alike as steeped in “divinity”. It’s a baggage, he believes, the system better shed. Carnatic’s so-called zone of “purity”, he says, always had...