I Pray That India, Pakistan Go To War: Dar

Michael Krepon talked to Abdul Majid Dar about the charges of being an agent of the Indian security forces by the Pakistan-based leaders of Hizbul Mujahideen and his hopes for the future. 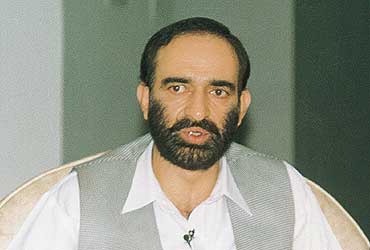 outlookindia.com
-0001-11-30T00:00:00+0553
One of the many tragedies befalling Kashmir is that positive political developments on the ground are stymied by erupting violence. On a recent trip to the Valley, I was again reminded of how much raw political talent resides in the mosaic that is Jammu and Kashmir. There are many ways to resume political work for the betterment of people aside from the working of the state government. Some, like former Hizbul Mujahideen commander Abdul Majid Dar, are now grappling with new ideas on how to be of service to their people. The old construct that public service can only be provided by engineering a settlement between India and Pakistan has led to a dead end. After all, if Washington has not been welcomed by the Indian government to hammer out such a settlement, why would the Hurriyat Conference be invited to do so?

In other political precincts, there is a positive ferment under way from the jockeying associated with the state assembly elections. Attempts to manipulate or manage these new political tendrils will only result in additional harm. The rhetoricians haven't established an admirable track record in Kashmir. What circumstances might have been available in the Valley if merely half the time and energy spent on brokering a trilateral settlement (between India, Pakistan and the Kashmiris) were devoted to bettering the daily lives of Kashmiris?

A great deal of space has been opened for creative political work by the shortcomings of some elected officials and administrators. On this listening tour, I was encouraged by a sense that J&K has the talent, both in and out of government, to offer a better future to those whose great misfortune in life has been to be unwillingly placed between the rock of militancy and the hard place occupied by various Indian security forces.

In 1996 and '97, Kashmiris were beginning to breathe more easily and deeply. And then came Kargil. Most Kashmiris I listened to were not focusing on the possibility of another impending conflict. After all, the stalemate along the Line of Control (LoC) had been going on for months, the weather was glorious, and Kashmiris have learned to take whatever moments are presented to enjoy the gifts that others are fighting over. Then came the news of another massacre at Kaluchak in Jammu, quite purposely directed at sparking another conflict. I read these sketchy reports on plane en route home, wondering, as many Kashmiris are surely doing, what the next chapter holds for this magical, yet tormented, land.

Among the people whom I met on the recent tour was Abdul Majid Dar, now impugned by Pakistan-based leaders of Hizbul Mujahideen as an agent of the Indian security forces. I talked to him about this and his hopes for the future, on May 12, in the general vicinity of Srinagar.

You are now a public figure but you are still living underground. Does this feel strange?
No doubt. No one likes to live underground but there is no alternative at this time.

The pressures you now face must be quite different from when you commanded field operations for the Hizbul Mujahideen here.
This is more difficult. Before I knew who the enemy was. I am not afraid of the gun. The problem for me is character assassination.But you are not a complete stranger to politics?I was in the political field before I became a militant. Now the situation is different. No one is clear and transparent. People say one thing inside the room and another thing outside to the press. So many media stories have been floated. Every story is different, but nobody tries to see what is the truth. Duplicity is the most difficult part.

Can you successfully combat character assassination underground?
The masses are innocent. They can be easily misled.I have said that we want a peaceful settlement and to live honourably. This statement has been exploited.

You talk about a peace process, but you do not call for an end to militancy. Why?
We are not professional militants. It is not our compulsion. We want a political process, but unless we see a positive attitude from the government of India we cannot put down the gun.

What are the key elements of a peace process?
Serious and sincere dialogue between India and Pakistan. An agreement that Kashmir is a basic dispute and must be addressed in a limited time-frame. Result-oriented dialogue is needed. This cannot be solved in a week's time. We are dealing with a chronic disease and it will take time. Both countries must take up confidence-building measures, because now there is no trust. Both must facilitate trade and commerce to benefit the Kashmiri people. We have to adopt the rule of live and let live.

Elections are coming up in Jammu and Kashmir—which you will not be contesting. How, then, do you intend to serve the people?
The alternative is to get involved in social welfare work. We need to help the widows and orphans. I want to work on this. It is the only noble work that can be done here. Political work is dirty. Nobody is honest and sincere in politics at this time. But we have empty hands and pockets, so we cannot help those suffering now. And there will be intrigues about where the money has come from.

So how can this work?
The respectable people in Kashmir society need to organise themselves and form an ngo. It can't be political. The help can't come from Pakistan. And if the money comes from the Indian government, Pakistan will sabotage it. Clearance must be given by governments. The militants will not be a problem. There must be a transparent system. Private contributions from outside the country would be welcome, strictly on humanitarian grounds.

When did you begin to think this way?
From 1995-96, this has been my wish. I want to help the innocent sufferers. No one cares about the orphans and widows. At the grassroots level, people are in search of peace and an honourable life.

(The author is president emeritus of the Henry L. Stimson Center, Washington)