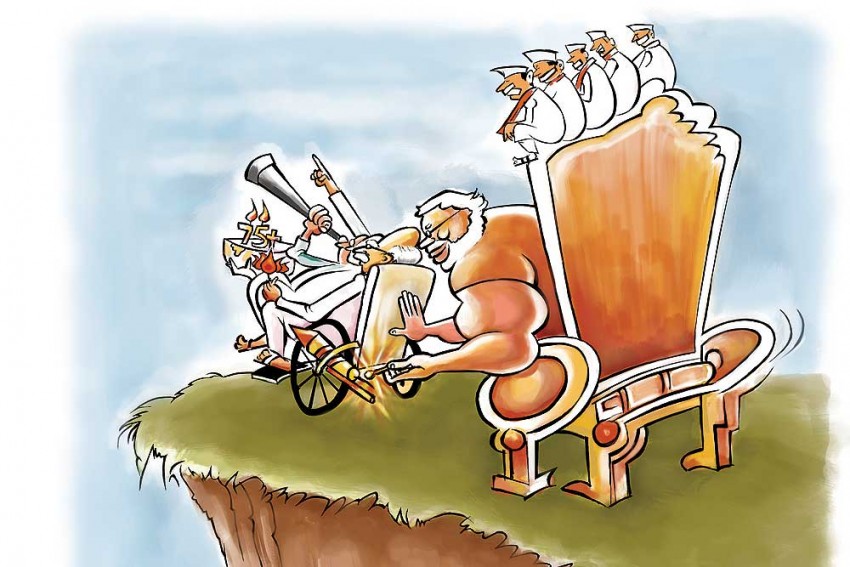 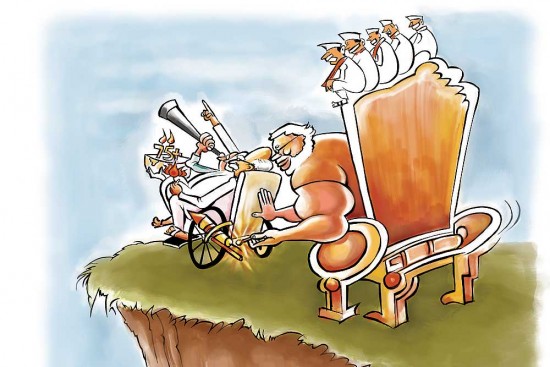 In the dictionary of the powerful, two rules are sacrosanct. One, you must appear to be powerful and, two, if you don’t use the power vested in you then you must be ready to be overruled, or worse, deposed. Clearly, no one in the BJP follows these two rules more doggedly than Narendra Modi, the party’s most successful import to 7, Race Course Road yet.

So, just 10 days before Prime Minister Modi completed 100 days in office, on August 26, his party sat down to rejig its highest decision-making body, the parliamentary board. Of its 11 members, three names—A.B. Vajpayee, L.K. Adv­ani and M.M. Joshi—had so far been irreplaceable. But this fortnight, the BJP led by Modi’s trusted lieutenant, Amit Shah, changed that cardinal norm.

The triumvirate of Atal, Advani and Joshi were moved up to the BJP’s dusty attic. They now belonged to the newly constituted ‘Margdarshak Mandal’, a guiding body where as seniors their job was, as party spokesperson Shahnawaz Hussain put it, to “show the way”. Active politics for Advani and Joshi (Vaj­­payee being long incapacitated)could now well be a thing of the past. Though for form’s sake, Modi did ensure that Rajnath Singh and he himself were also named in the margdarshak list.

The projection of Modi, the omnipotent, was complete. Of course, the BJP justified the cutting down of the old guard, citing the “75 years cutoff formula”. An old-timer offered this wry explanation: “Amit Shah’s presidency, Nripendra Mishra’s appointment thro­ugh an ordi­nance, the reconstitution of the parliamentary board, all these are examples of what Modi does best, consolidate power through alienation.” 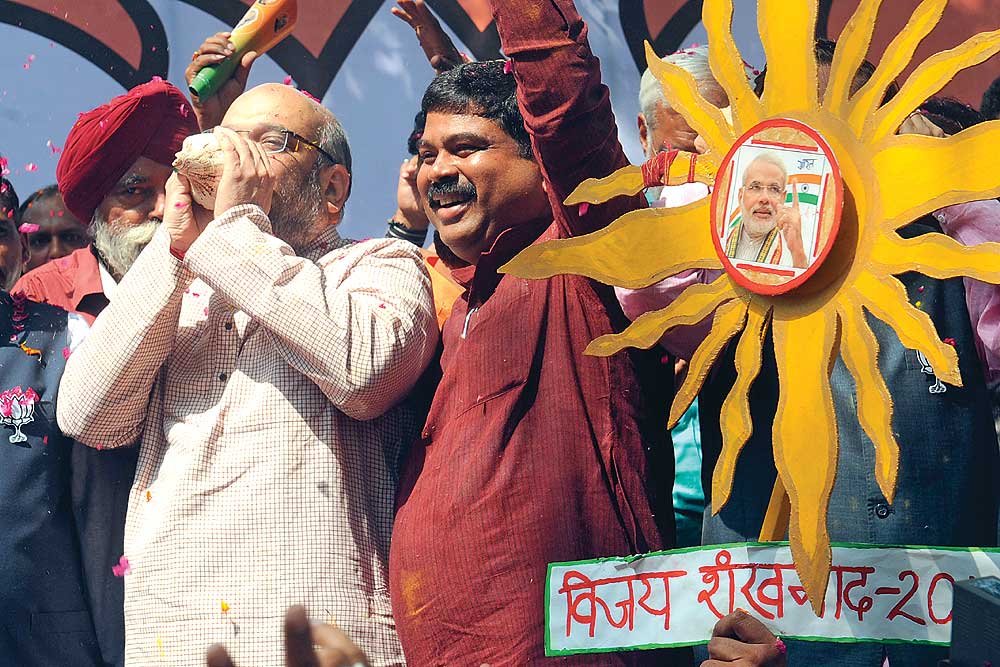 Modi, after all, is the “relentless one”. BJP sources say his team is developing a system to nix competition from peers too.

But was the defanging of Advani and Joshi just a one-off, generational thing? Perhaps not. Not for nothing do they call Modi the “rel­en­tless one”. Insiders confirm the Modi-Shah team is dev­elo­ping a system to do away with any possible competition even from con­temporaries. It is with this aim in mind that reports of cracks within the cabinet were lea­ked to the media. Modi-watchers say it only suits his politics if Union home min­ister Rajnath Singh lashes out aga­inst cabinet colleagues in public beca­use infighting in the power corridors will ensure that politically the PM rem­ains first amongst equals (in a party full of aspiring PMs). As the HM struggles to save his reputation, politics in governm­ent circles proceeds through “unsett­l­ing people and creating a lar­ger-than-life image for Modi himself”.

It is this iron hand on show when Union ministers are refused the right to choose their own secretaries, officers and ministers are handed out a list of dos and don’ts, bureaucrats are given freedom to connect with the PM dire­ctly bypassing their ministers. An exe­r­cise in “chipping away at the powers of others” has already begun. By the same logic, the new order in Indian politics ensures that the judiciary can’t choose its own judges. The prime min­ister must hold sway even over that.

A former Sangh ideologue explains, “These aren’t personal ego battles, it has more to do with the kind of politics Modi practises. And his politics has alw­­ays been about creating power for himself through alienating others in the system. Look closely at the history of his politics. Surely, Advani and Joshi had been rendered powerless even when Modi refused to accommodate them in his cabinet in May this year.” So their  shunting out then, as an old-timer puts it, is “to maintain an element of uncertainty, keep everyone on their toes”.

So it’s Gujarat all over again, where the RSS was reduced to the margins, where tall leaders like Keshubhai Patel and Shankarsinh Vaghela found themselves forced out of the saffron umbrella altogether. Finally, under Narendrabhai, Guj­arat became Modi and Modi became Gujarat. A senior party leader in Delhi told Outlook, “Modi believes in the idea of a supreme leader. And that supreme leader can be no one other than him.” An RSS leader says, “Modi believes he is the banyan tree and nothing can ever grow under a banyan tree.” If that be true, then the “single pillar” philosophy is just what Modi has brought with him to Delhi.

As the leader of the largest party in the Lok Sabha, Modi is setting the rules of the game. Is it any wonder then that the Congress party, reduced to a humiliating 44 members in the Lok Sabha, has not been offered an inch by the BJP? Despite the Congress’s appeals to even President Pranab Mukherjee, the BJP has been firm in denying it the post of Leader of the Opposition in the Lok Sabha. A political advisor to a Union minister says, “Modi is sure that he must deny the Congress party every chance of regrouping and re-energising. If the BJP allows the Congress even a foot in the door, then it creates opportunity for the latter to scuttle the party’s plans for the future.” Evidently, the power to bulldoze must remain with the BJP, and Modi, at all cost.

No wonder then that Modi’s government is carefully engineering a complete exit of the UPA from the political landscape of the country. Working towards that, governors appointed by the UPA have either already resigned under pressure or have been put on notice by the government. Through the churn, the PM maintains a dignified silence, letting political bickering bet­w­een his party and the others take its own predetermined, scripted course.

In Modi’s regime, perhaps there is a deliberate showcasing of a great leader. One who allows the proxy raising of communal temperatures by his own party MP, Yogi Adityanath, while successfully projecting himself as “seemingly secular” with his silences. One who backs up his home minister thro­ugh a press release after he has been humiliated in public but refuses to take his foreign minister on his first major diplomatic outing to Japan. One who prefers extreme centralisation of power in party and government but chooses to describe himself as the “pradhan sevak” instead of pradhan mantri from the ramparts of the Red Fort on August 15.

After all, it suits both Modi’s agenda and his long established image. Modi’s need to be remembered in history is the main priority. He must therefore work only for himself and depend only on himself. Simply because “greater glory” comes in single packages, it can never be a collective pursuit.