Home  »  Magazine  »  National  » Interviews  » interview »  'I Only Get Suggestions, I Never Thrust The Awards'

'I Only Get Suggestions, I Never Thrust The Awards'

The I&B minister, who not only certifies controversial films but also seems to want to decide on who will win the coveted Dadasaheb Phalke award this year, defends his actions. 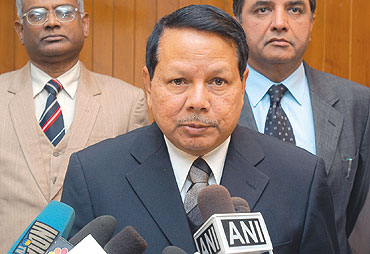 Ministers who head the Union information and broadcasting (I&B) ministry have always had a mind of their own, and have paid scant regard for the independent organisations working under them. Like his predecessors, Priyaranjan Das Munshi too has been assertive and, some would say, interfering. In the last few months, he's not only taken upon himself the task of certifying controversial films but also appears to have made up his mind on who will win the coveted Dadasaheb Phalke award this year. These 'decisions' have irked the people who have the mandate to certify films and choose those who they feel deserve national awards, but Das Munshi says he's done nothing wrong.

The Da Vinci Code set a bad precedent. Two months later, it was the turn of noted director Mrinal Sen to object to the minister suggesting veteran actress Suchitra Sen's name for the Phalke award. Then there is the controversial Broadcast Bill that proposes to put curbs on the print media and television, and which Das Munshi wants to pilot. So, does Das Munshi like to control pretty much everything that comes under his ministry? In an interview to Anuradha Raman, the I&B minister clears the air. Excerpts:

Why are you interfering in the functioning of autonomous organisations like the Censor Board?

I don't believe in interfering with the work of the board. But what am I to do if certain sections of people have objections to a certified film? All I said was, let's together see Da Vinci Code and sort out the problems, if any. I requested leading members of the (Christian) community to watch the film with me. Eventually, that was done and the film was certified with a disclaimer.

But the Censor Board chairperson was unhappy with what she perceived as interference in her work. Wasn't she critical of this?

That's not true. I spoke to Sharmila Tagore soon after reports surfaced about her unhappiness. She denied she was unhappy at the ministry's interference. She isn't annoyed. She was misquoted, and her views weren't understood in the proper context. That's what she told me.

Why has the I&B ministry suddenly taken upon itself the role of a class monitor, monitoring everything?

No, we don't do that at all. The ministry is more liberal than ever before. I'll quit if someone proves that I have interfered in the working of news channels.

What about you suggesting Suchitra Sen's name for the Phalke award?

I received several letters from fellow MPs, including Lata Mangeshkar, recommending the name of Suchitra Sen, Sulochana and some actors from the south too. As a minister, I do keep getting suggestions from fellow MPs. I am not thrusting the decision on anyone.

But Mrinal Sen is annoyed that you are forcing the decision on the jury...

Let me tell you, I am not competent to suggest names for awards. I only received some names. If the media chooses to paint me as some kind of an interfering person, what can I do about it?

Your ministry now appears to have taken on the job of dictating what one should see or not see on TV.

I think the problem is one of understanding what democracy actually means. The word should be analysed properly and interpreted accordingly. Tell me which part of the world is a khula bazaar? Don't the US and UK have laws on what should be shown? How can you have adult content on prime time when children are watching? There are strange programmes like Bikini Destinations on TV. Any fashion channel comes and beams its programmes into the country. How am I to react to the channels when people come and complain?

But why dictate what should be shown on TV and movie theatres?

That's why I say, wait for the broadcast regulatory authority to look into issues such as this. It will look at content on news and entertainment channels. We are working only till the authority is in place. I have mooted some kind of check on content. Is there anything wrong in doing that? Moreover, it is the cable operators who I am trying to check.

They are just beaming the programmes shown by the broadcasters...

That's my point. Look at the politics. When we got the Cable Act, the broadcasters were happy because they were not within the ambit of any law. Now that a law is being planned for them, they don't want it. Is it fair? Can you see the absence of law anywhere in the world?