"I never tried to find out anything fishy in the team"

"People have a wrong impression about me. If I don't mingle with the rest of the team, nobody else does either." 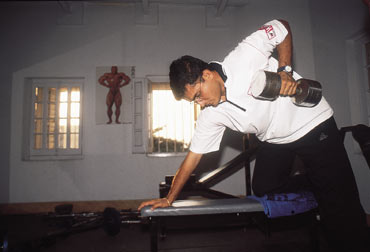 outlookindia.com
-0001-11-30T00:00:00+0553
In an exclusive interview to Outlook, Saurav Ganguly talks about the team for the Aussie series, allegations about his arrogance, and match-fixing. Excerpts.

How important is the upcoming series against Australia for you?
It's important to do well against any team. Australia is no exception. They've got an outstanding record in Test cricket, which makes it more of a challenge.

How tough would it be without Anil Kumble?
Obviously it's going to be tough. He's a real world-class bowler. Without him, we'll be handicapped a bit.

Would you then settle for a team without any leg-spinner at all?
We are watching a few boys who've done well in domestic cricket.

Any specific team in your mind?
It's going to be more spin-oriented.

Do you favour different teams for the Tests and the one-dayers?
No. I believe that a good Test player is also a good one-day player.

What are the team's weaknesses?
We need to work on fielding.

Gaekwad says you didn't take advice or discuss matters with him when he was the coach?
If he has said that I have not discussed (things) after being coach for two to three series with me, he is wrong.

What about allegations that you are aloof and don't mix with the team?
People have a wrong impression about me. If I don't mingle with the team, nobody else does. We go out for a drink and dinner after every victory now. You don't know what's happening in the team.

Azhar says match-fixing cannot be a one-man show. Comments.
When I was out of the team, I never thought such things could happen. Nor had anybody spoken to me when I was in the team. It's tough to say how it works.

You once said that Azhar was one of your idols....
I never said that.

I have a copy of the interview.
Let's keep this question out. I don't want to answer that.