I Met Gandhi, And Then I Met Anti-Gandhi

Imhasly finds India bristling with opinions on Gandhi, but its politics untouched by his ideas 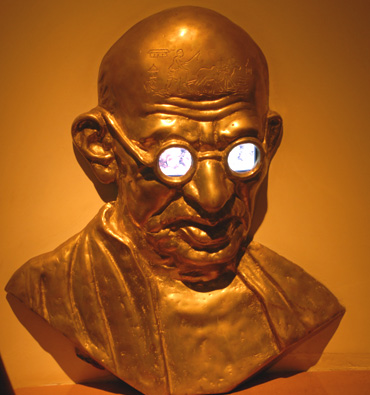 Goodbye To Gandhi?—Travels In The New India
By Bernard Imhasly
Penguin Pages: 224; Rs. 425
Scene One: Moscow, 1987. I ask my 21-year-old interpreter and guide, a student at Moscow University, to take me to the Lenin Mausoleum. "You want to see a corpse?" he asks me, horrified. "Lenin is the Father of the Soviet Union," I chide him. Reluctantly, he takes me to the Kremlin and we join a kilometre-long queue. "They don’t think it’s just a corpse," I say. "Peasants!" he retorts.

Scene Two: Beijing, 1995. This time my 25-year-old interpreter doesn’t admonish me when I ask to visit the Mao Mausoleum, but thinks the visit will cut into my shopping time! "See Mao memorial next time," he advises. He was there only once on a school visit.

Many republics were born in the 20th century and each has a "Father of the Nation". Lenin, Mao, Mandela, Ho Chi Minh, Nasser, Nkrumah, Tito, Sukarno, Lee Kuan Yew, Castro, Jinnah and, of course, Gandhi. Of all the "isms" they left behind, only one has truly survived into the 21st—Gandhism. Not as an official state ideology, but as a popular idea respected around the world.

I am not aware of any writer travelling into contemporary Russia in search of Leninism, nor into China in search of Maoism. So, why has Imhasly chosen to go in search of Gandhism in India? Is it because India still projects Gandhism worldwide, as we did recently when we sought a UN resolution observing October 2 as the international day of non-violence? Russia or China does not seek global veneration of Lenin or Mao.

If India would like the world to be reminded that this is the land of Gandhi, Imhasly has a case for travelling around India in search of Gandhi’s surviving legacy. It makes for an interesting book.

He visits the likely places: Porbandar, Ahmedabad, Wardha, Nagpur, Champaran, Calcutta and New Delhi. He travels to Bangalore and Hyderabad, meeting the symbols of a new India; and to the backwaters of development from the slums of Mumbai to the hills of Manipur, meeting dropouts and rebels. He meets Gandhians, Gandhi-topiwallahs. He meets the "anti-Gandhi" rebels—from Dalit activists to Naxalites, from Hindutva crusaders to Stalinist commissars.

Imhasly asks some pertinent questions about the relevance of Gandhi to our times, to the work we do and our attitude to work. His most telling observation is that every Indian he meets has a view on Gandhi and his ism, but that Gandhi’s ideas are not central to any important political discourse in the country. Says Imhasly, "Gandhi is alive in civil society, but his virulence is absent where he had positioned himself throughout his life: in the politics of the country, at the intersection between private life and public action. In my journey I did not meet a single politician who reflected on Gandhi’s core principle of means and goals, his insistence that both are inextricably linked, like seed and fruit."

Recognising that Gandhi was not just a dreamer, but a doer, Imhasly goes in search of those who are trying to make a difference in their own ways. He meets Ela Bhat of SEWA, Aruna Roy and Ramesh Ramanathan of Janaagraha, all inspired by Gandhi’s motto "Be the change you want to see". Ramesh’s wife Swati captures the dilemma of today’s Gandhian social activist aptly: "In a sense, Gandhi had it easier. He fought an amoral and alien system, and this gave him moral legitimacy and a great pulling power. But we don’t fight an amoral system but one that is legitimate.... We are not out to wreck it, but to reform it."

How do we do that without feeling frustrated with the negativism of the Naxalite or the Hindutva or the Dalit critic of Gandhi? Without becoming angry with those who mouth Gandhi’s name and have neither compassion nor passion? Imhasly’s journey does not provide clear answers, but it urges us to journey forth, with an assurance that an answer will be found through patient travel, and that Gandhi is not just a corpse for many of today’s youth, but a living idea.

(Sanjaya Baru is media advisor to the Prime Minister.)

The Centre Has An Edge