I Hereby Select My Self...

The IPL story rages on, but BCCI secretary Anurag Thakur has wildfires at home to put out 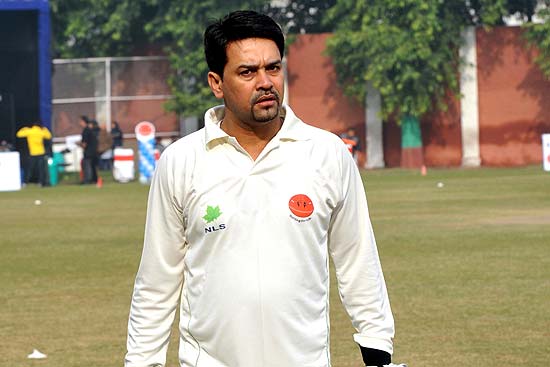 Thakur In The Dock

When an ordinance to bring cricket under the government’s control was promulgated by several states, many cricket associations turned into not-for-profit (NPC) companies

Tuesday, July 14, 2015, was a signal day in the messy history of the Board of Control for Cricket in India. As former chief justice R.M. Lodha hit two IPL teams out of the arena and with it the reputation of the custodian of the sport in the land, the channel OB vans swooped for the BCCI’s official response. It came first from Jagmohan Dalmiya, the ageing board president from Bengal. And then from honorary secretary and, some say, future face of the BCCI: Anurag Thakur.

“We respect the verdict,” said Thakur, who is also the bjp’s youthful MP from Hamirpur in hilly Himachal, “we will take a collective decision in a transparent manner, in the right direction and in the larger interest of the game after the verdict is analysed.” As a some-time cricketer, Thakur has enough street cred. On his Lok Sabha page, he proudly proclaims that he was the youngest president of the ‘Himachal Pradesh State Cricket Association’ at age 25, and the youngest junior national selector at 26.

Thakur is now 40 and has been president of the HPCA for 15 years running. As the BJP tightens its grip on the cou­ntry’s richest sporting body, many look to him (and his mentors) to provide the “transparency and direction” that was lost in the lust for lucre. But the news isn’t good from his home-state, now ruled by the Congress. The state vigilance departm­ent has drawn up an elaborate ‘final rep­ort’ indicting his helmsmanship of the cricket body, a key charge being that HPCA’s been “turned into a company”.

To be sure, the HPCA is not alone in this game (see box). The Uttar Pradesh Cri­c­ket Association (UPCA), whose torchbea­rer is Rajiv Shukla of the Congress, too has undergone the same transformation, from a cricket association which enjoys the patronage of the state into a not-for-profit (NPC) company under Sect­ion 25 of the Companies Act, which essentially takes it out of government purview. And to be sure, no charges have been framed against Anurag yet though the high court has dismis­sed his petition seeking quashing of charges (the SC will hear it next month). But in the superheated atmosphere the IPL drama has generated, even Cae­sar’s wife has to be seen to be above board. So suddenly Thakur’s  (and Shu­kla’s) seemingly innocuous moves at protecting their turfs are being scrutinised with a fine toothcomb. 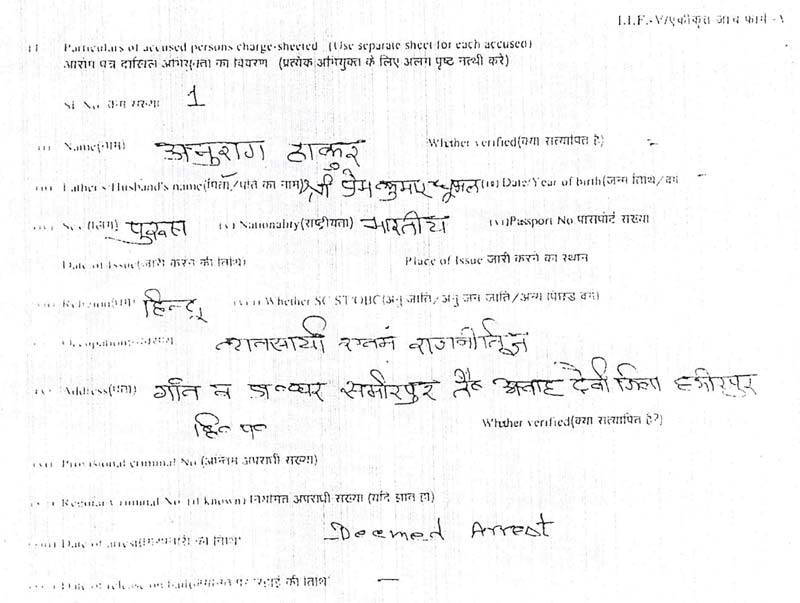 Though Himachal Pradesh has had a cricket association since 1960, it was mostly defunct. Which is why Anurag opted to play the sport in Punjab. After a short, less-than-inspiring stint, he decided to shift to the business of cricket. A sports writer in Chandigarh claims Anurag did seek to get into the Punjab cricketing body during the late ’90s but failed to break the glass ceiling as he was an “outsider”. Moreover, his actual destination was the BCCI—Punjab was a longish route to the national body controlled by a lobby not very sympathetic to his overtures.

Around the same time, his father Prem Kumar Dhumal became the Himachal CM in the first of his two tenures (1998-2003). Anurag lost no time in getting himself elected president of the association in 2000. His father became patron-in-chief. Their first project was building the international cri­c­ket stadium in Dharamshala. A proposal was put forward by the state’s youth ser­­v­ices and sports department. The finance department okayed it but recommended that market rates be applied for the lease rent since the stadium would generate revenue through ticket sales, sponsorsh­ips etc. But when the matter reached the cabinet, Dhumal—despite being the HPCA president’s father—chaired the meeting which approved transfer of 16 acres of land at Rs 1 per month for 99 years. 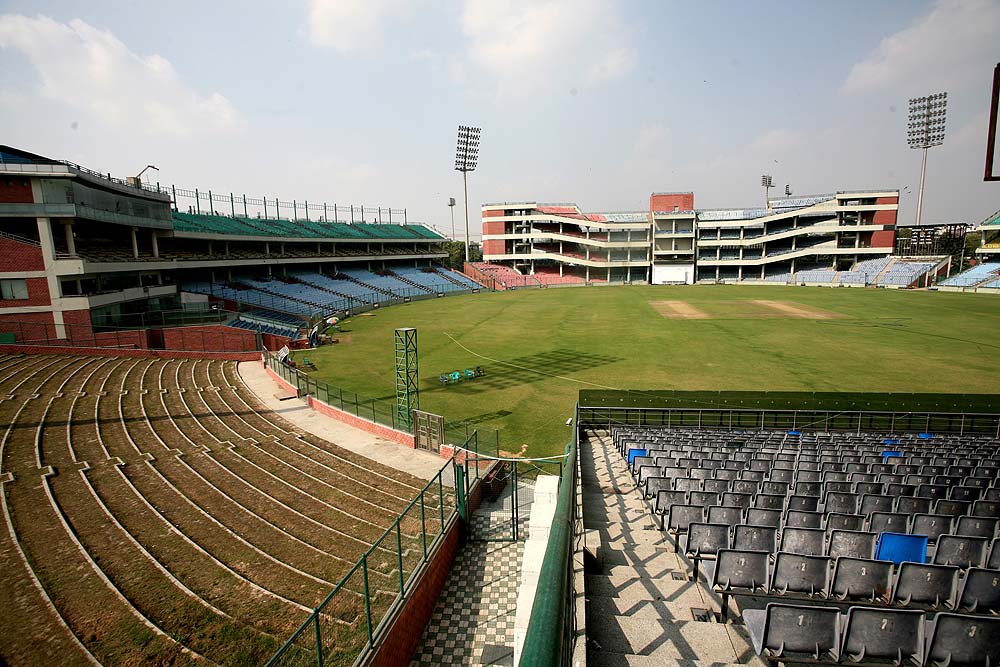 When the matter reached the cabinet, Dhumal chaired the meet which transferred 16 acres at Rs 1 per month for 99 years.

The HPCA was also smart enough to sub-lease part of the land to two private companies for setting up two hotels overlooking the stadium and giving occ­upants a breathtaking view of the mou­n­tain range. Of the two hotels, Pav­­­illion and Aveda (now shut), the latter was built on top of the clubhouse and provided occupants a view of the grounds. Sig­ni­ficantly, besides the stadium, the cabinet had allowed the lease for building residential quarters for the players.

The two hotels together reported a turnover of a little over Rs 2 crore in 2012-13 while the government continues to receive the princely sum of Rs 12 a year for the land, as per the vigilance bureau report. Anurag, of course, ref­u­tes this (see interview). It also says the HPCA has encroached on some 3,000 square metres of land in addition to the 50,000 square metres it was granted.

None of these details would have surfaced had it not been for a UGC-funded government college which shared a wall with the cricket stadium. In 2002, the Dhumal government was unable to acquire the additional land because the Government PG College held out. But in his second term (2008-’12), the CM man­aged to fix the problem for his son.

When the stadium was being built, the college had given an NOC for the construction. But it laid down three conditi­ons. First, that sufficient land be spared for future expansion of the college. Second, that students be allowed access to the stadium. And finally that the college be allowed separate access so that its own activities are not hampered.

In 2008, during Dhumal’s second term as CM, he allegedly made the then deputy commissioner of Dharamshala district, K.K. Pant, convene a special meeting, the purpose of which was to declare the PG college dilapidated and unsafe for use and also a security risk to players.

Pant and other district officials convened the meeting in March ’08 and directed the college principal to apply for land to relocate the buildings elsewhere. No one at the government college had complained about the buildings being dilapidated. But an HPCA representative present at the meeting said that the body was “concerned about the safety of the building and the security of cricketers”.

Immediately after, district officials had the building declared unsafe despite it being only 24 years old and repairs had been carried out two years earlier. The education department also did not intervene (they are accused in the chargesheet as are district and other departmental officials). In July ’08, Thakur (as HPCA president) asked for a further land grant of 720 square metres lying next to the stadium. But the only such plot was the one on which the college stood.

Meanwhile, forest clearance given for the land  has also been questioned in the chargesheet. In the 1980s, the forest dep­artment had planted 2,000 trees here during an afforestation drive. But when it came to giving clearance, the department approved the land grant saying that it was “barren” (the HPCA is accused of felling some 500 trees).

In another sleight of hand, in August 2005 a not-for-profit company called Himalayan Players Cricket Association was registered with the with the Registrar of Companies (RoC) in, of all places, Kanpur. The company’s name was later changed to Himachal Pradesh Cricket Association, same as the cricketing body. Eventually, the HPCA, the original society, adopted a resolution to merge with the company and transfer all its assets, including the stadium, to the latter (see box). Questions have been raised here too. Had it been a bonafide registration, it could have been done with the Registrar of Companies in Chandigarh, where companies from the hill state are registered. Why was the company first registered in Kanpur and then shifted to Chandigarh?

The conversion meant it would no lon­ger be governed by the Societies Reg­istration Act, 1860, which imposes strict conditions on the way such societies function (not even its articles of association and by-laws can be changed without first notifying the government). The conversion to a company also ensured that even with the BJP out of power in Himachal, the cricketing association’s functioning was in the party’s control.

Retired professor Ram Ratan Rohi was  HPCA secretary for 20 years till 2005 till he found it difficult to continue to work with Anurag. “As HPCA president, he was selection committee chairman for the Ranji trophy team. In 2000, shortly after becoming  president, he selected himself to play in a Ranji match (against J&K) and made himself captain as well. This allowed him to become a national selector as per BCCI rules,” Rohi claims.

“Earlier, the 12 district associations affiliated to HPCA had 24 votes. Anurag created a provision for 25 life members which outnumbered the 24 votes. He also redrafted the HPCA constitution, as per which the president would appoint office-bearers and they would elect the president. For a long time, I remained silent because both my wife and I were government servants and his father was the CM. In 2005, I finally quit,” he says.

Now truth be told, the conversion of the society to a company was not an original idea. Delhi did it first (see left). The UPCA too had pulled the same stunt a year before HPCA, in 2004. From an association with 118 members, it had converted itself to a not-for-profit company with three shareholders, one of whom happened to be Rajiv Shukla, a former Union minister. Here too, nothing is to stop shareholders from deciding the fate of their company as is the case with HPCA.

The Lodha committee looking into the IPL irregularities mentions that board officials “conduct a public function” even though cricket is not run by the government. But if the HPCA and UPCA shenanigans are any indication, it might be time for the government to set up an age­ncy to supervise cricket or else the courts will have to run the sport full time.

By Ushinor Majumdar in Shimla, Chandigarh and Delhi