So we were married, followed by laddoos and the instruction: You may now cross-feed 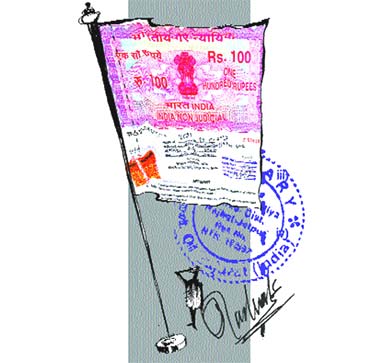 outlookindia.com
-0001-11-30T00:00:00+0553
When I first visited Delhi in the days before India was wooed by the world as a looming hyperpower, I spent a lot of time hanging around in government offices. You needed a permit for everything then: crossing a state border, having a drink, going to Sikkim. Queuing and queue jumping had become a national pastime, even a sport.

This summer, 21 years on, I found myself sitting in an office discussing with my wife-to-be how to circumnavigate the bureaucracy. Like everyone else, I had lost the old fatalism—the assumption that everything had to be this way.

"You have the documents?" asked the Marriage Officer.

"Which documents?" Then it turned out that because I was, in technical terms, a Christian, we could only get married in India under the Special Marriage Act, 1954.

A peon distracted the Marriage Officer with a bulging cardboard file. It was a hot day, and inside the office in the environs of the court, it was getting hotter. There were two chairs for visitors, and several dozen of us were crowded into the little room, in some cases accompanied by an assortment of elderly family members, fanning themselves and muttering. One man was arguing that the presence of his grandmother in a car somewhere near the building meant that he should be dealt with as a priority.

In a corridor outside, a woman dressed like a crow, or perhaps as a lawyer, went about with a pocketful of official seals offering stamps for cash. She seemed to be many different things: a Gazetted Officer, a Notary Public, perhaps some more important legal functionary on particular days of the week. A lanky old man with a typewriter sat on the pavement outside the court, tapping out forms and testimonials.

The next day found me at the British High Commission, surrounded by armed Gurkha guards and car exhaust fitters from Wolverhampton who were attempting to extract rural brides from Jalandhar. If the Desk Officer had no objection, could I have a no-objection certificate? In true British style, I was issued with a formal document stating that as per regulations, they did not issue no-objection certificates, but otherwise had no objection.

This was what the Marriage Officer needed. No objection. Soon we were back in his office, carrying a growing folder. Then he produced further forms and sent us off on some more baffling errands. Two passport photos each were required, duly attested, and documentary evidence of ‘martial status’ (this was not a call to arms; it only meant ‘marital’) and present dwelling place. Why were there such strict procedures, I asked the Marriage Officer. "Some anti-social elements are coming to India, trying to marry Indian girls." I looked around the room, wondering to whom he could be referring. "Anti-social elements from Bangladesh, and other places."

Finally we were done, and a photocopied version of our necessary information and passport photographs was added to those pinned on a notice board outside. It stated that we intended to get married as per Section 5 of the Second Schedule of the Special Marriage Act, in case anyone had an objection. The strangest combination I saw on the board was the forthcoming union of one Svetlana Novgorodskaya of Ukraine (whose picture made her look somewhat older than the 64 years listed on the form) and Mastan Chand, a 23-year-old farmer from Punjab. Where could this pair have met?

Finally, the day came. The magistrate arrived at my wife-to-be’s family home accompanied by plenty of paperwork and two assistants, one wearing an iridescent shirt. While relatives and guests watched, we signed forms and a ledger, and the three witnesses did the same. A tray of laddoos appeared, and the magistrate announced: "You may now begin cross-feeding." I was baffled; my wife knew what to do. "I think he may have worked in animal husbandry before he became a magistrate," murmured a guest.

I made a discovery after we had got married. As the husband or wife of an Indian citizen, you are entitled to a pio card. As a Person of Indian Origin, it will mean that when I write another book like Liberty or Death: India’s Journey to Independence and Division, I will no longer be called a foreign upstart by the readers of Outlook. I will merely have to shrug my shoulders and say, "What to do? We are like this only."

Patrick French’s new book, a biography of Sir Vidia Naipaul, will be published in 2008.