“I Had Never Even Heard Of Her Before She Cured Me” 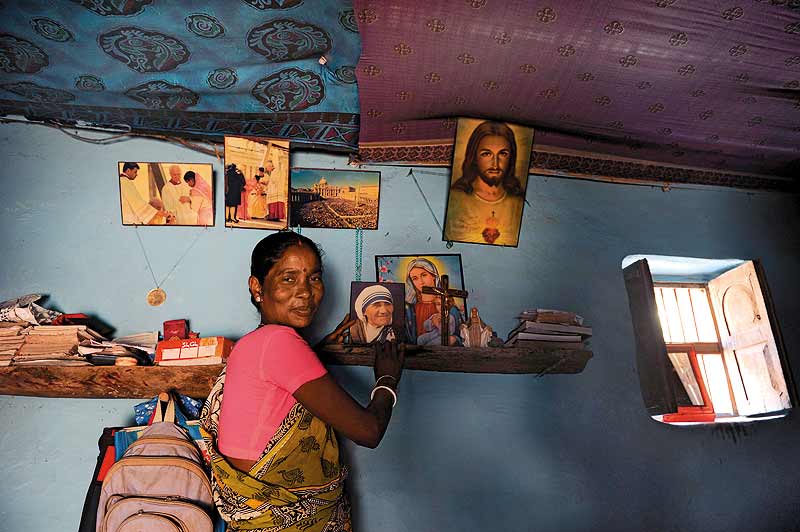 One of the charges the Canadian researchers have levelled against Mother is that the ‘miracle’ attributed to her, something that led to her beatification, was really a sham. They claim that Monica Besra, the woman whom Mother is suppo­sed to have “healed” when she wasn’t even alive, was in truth cured by medication rather than by her blessing. Outlook travelled to Besra’s home in the remote Duli Nakar village in West Bengal’s Dakshin Dinajpur district, 13 hours from Calcutta. It is not clear if the golden light around the picture of Jesus Christ on the silver-coloured tin door leading into the mud hut is a divine indicator that a miracle took place here or simply the glow of the late winter sun. The way Monica sees it, it was a miracle.

It has recently been suggested that it wasn’t Mother Teresa’s blessings but medicine that cured you.

I took medicines for over two years and kept getting more sick. I and in fact even the doctors were starting to give up on me. Then one evening the Sisters (of Mother Teresa’s charity) came to my hospital bed and placed a medal on my stomach and kept praying to Mother Teresa to make me better. That evening I remember falling into a deep sleep and waking up feeling lighter. I suddenly became aware that the pain was gone. I also saw a light that I cannot describe to anyone.

But it was one year after Mother Teresa died.

Yes, in fact, exactly after one year, on September 5, 1998. But the medal that was placed on me by the Sisters had been touched by Mother and they were constantly praying to her. She blessed me from heaven.

What was your ailment?

I had a stomach tumour and ovarian cysts, which the doctors said must be operated on. I remember excruciating pain in my abdomen and constant nausea, headache and aches. After that evening, all disappeared miraculously. Even the doctors couldn’t believe it. The swelling in my belly had completely disappeared. Tests revealed that the tumours and cysts were also gone.

Did you believe in God before this incident?

Yes, but I and my family converted to Christianity after this. Since it was Mother who cured me, this was my way of saying thanks to God.

Do you regret that you never got to see Mother when she was alive?

I had never even heard of her before she cured me. But I have felt her so I don’t regret it. It is because of her that I am alive today.

What do you have to say to those who don’t believe that yours was a miracle cure?

I have experienced it myself. So if you don’t believe it, what can I do?

The Saint & The Sceptic