'I Enjoy Playing Against Inzy' 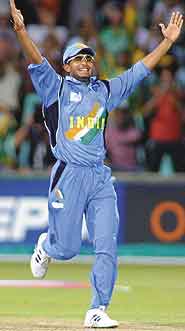 Cricket's role in promoting peace
Well, it's a very simple theory. The common man in India and Pakistan loves the game. Cricket is more than a game in this part of the world. Matches between the teams will help build bridges, enabling people from the two nations to come together. I am sure Inzamam feels the same.

On his experience of playing in Pakistan last year
One of the best tours of my career. It's a pity that I could not play the full tour because of injury. It was a memorable series for two reasons. One, we won both the Test as well as the one-day series. No Indian team had previously done that. And, secondly, for the hospitality. We really cherished that.