"I Eat Your Eyes"

The northern front too opens up, albeit haltingly 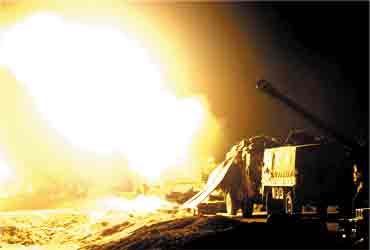 outlookindia.com
-0001-11-30T00:00:00+0553
The lights went out at Harir at about 9 pm, and the streets filled with soldiers from the Kurdish security service. In town, boys went up on the roof to look for planes—and the sky was filled with parachutes. "The first ones who landed jumped up with their guns like guards—the next ones ran around picking all their equipment," said one young man.

It felt like the war in Iraq had finally come to the north, when the 1,000 members of the US 173rd Airborne Brigade parachuted into a muddy airfield here on the western side of the Kurdish zone overnight Wednesday. The paratroopers were the most significant deployment of coalition troops in the north to date, part of an abbreviated northern front slowly taking shape. The US moved troops and equipment into the Kurdish-controlled zone all week, while air strikes pounded the Iraqi front and the key northern cities of Kirkuk and Mosul. "The northern front will be most important," predicted Hoshiar Zabari, spokesman for the Kurdish Democratic Party, whose troops control Harir. "If it opens from here, it leads directly to Saddam’s heartland, to Tikrit...from here you can get closer to Saddam’s strategic assets."

The US and its coalition partners had planned to bring as many as 60,000 troops into northern Iraq from bases in Turkey to create a pincer movement joining up with the force coming from Kuwait in the south and surround Baghdad. But the Turkish parliament rejected a multi-billion dollar deal to allow the coalition access to those bases, and consequently the coalition has had to settle for this drastically scaled-back version.

The primary goal for the northern push, it seems, will be Kirkuk, whose oil fields produce half of Iraqi petrol exports. Two Iraqi divisions separate the coalition from Kirkuk and Mosul and the US went after them this week from the air. The first attacks came in the dark, missile strikes launched from the Red Sea that sent out shock waves over the region and made the night sky glow orange. Clouds of smoke billowed on the horizon above Kirkuk and Mosul, and Kurdish soldiers, known as peshmerga, cheered each one. "I eat your eyes!" they said with each bomb, a Kurdish expression of delight.

On Thursday, the Iraqi troops all along the eastern side of the 500-km front retreated. Peshmerga watched the retreat and then moved up the hill, sending out a protective cover of Kalashnikov fire while they searched the bunkers. By nightfall, the Kurds held the ridge—"Free Kurdistan" was 1 km wider. Men in town fired off their guns and civilians drove up to take a look at the Iraqi positions in whose shadow they’d lived for 12 years.

But despite the punishing air strikes, there was none of the mass Iraqi desertions the coalition had predicted and the Kurds were expecting. From the no man’s land below the Iraqi positions on Chamchamal, the reason seemed clear: Iraqi intelligence units had laid anti-tank and anti-personnel mines on the roads in the opening days of the war, and masked members of the "execution squads" were posted at gun positions along the ride, poised to shoot would-be deserters in the back.

There were also air strikes all week on the eastern border with Iran, where US missiles targeted the mountain stronghold of a radical Islamist group called Ansar al-Islam, whom Washington has linked to Al Qaeda and which is accused of acting as the link between the terrorist organisation and Saddam. Ansar has just 700 fighters (an estimated 100 of them Arabs who are veterans of the Afghanistan war), but the group has waged a bloody war with the Kurdish government since Ansar set up a Taliban-style regime in a sliver of Kurdish territory three years ago. The Kurds said they could not defeat Ansar without air strikes (because of the rough mountain terrain, and because the group gets a steady flow of weapons from Iran). Busloads of US special forces were moved into the region through the week to lead a ground offensive—but the rockets and the shells continued to explode out of Ansar territory, suggesting the group remained operational despite the aerial attacks.