"I Don't Feel Any Different" 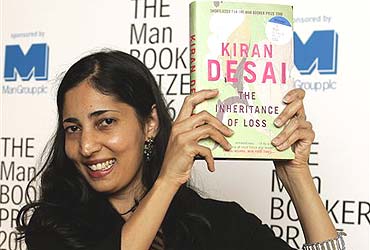 outlookindia.com
-0001-11-30T00:00:00+0553
When the demure young woman clad in a shapeless kurta and with a sing-song Indian convent school accent stood up to receive one of the world's top literary prizes, she was perhaps the only one in the glittering Man Booker Prize ceremony at London's Guildhall on Tuesday evening who didn't actually turn a hair of her un-blowdried shoulder-length crop. "It's like winning a lottery," she told Outlook in her characteristically matter-of-fact tone. "No one in the competition is a heavyweight or lightweight. It's all a matter of luck."

Just how chancy the whole business of winning the Man Booker can be is the way the bookies' odds kept shifting this time. At £50,000, the award is not the richest literary cash prize, but in terms of soaring post-Booker sales, not to speak of advances for future books, there's no literary prize that is more coveted than the 27-year-old Man Booker. This year it was Peter Carey who emerged as the early favourite, tipped to win a third time. But he didn't make it to the shortlist of six. Nor did Nadine Gordimer. Kiran Desai's The Inheritance of Loss, on the other hand, was initially dismissed as the 7/1 outsider, and remained an outsider to the last. The last time an Indian won the Booker was Arundhati Roy in 1997.

Which is perhaps why Kiran Desai didn't waste much time in either daydreaming about the prize or preparing for it. Neither of her parents—to both of whom she squeezed in a thank-you in her impromptu acceptance speech ("I'm Indian and so I'm going to thank my parents")—attended. It's part of the family tradition to not defer travel plans for such incidentals like literary prizes. "I haven't yet got through to my mother, who is visiting a relative somewhere around Dehradun," says Kiran. "She'll probably get to hear of it in a day or two." Kiran's mother is well-known writer Anita Desai, more famous for the three times she's been shortlisted for the Booker Prize than the 14 novels she's written so far. Her father Ashvin, in whose home in Delhi Kiran spends a few weeks every winter, is also travelling. "He's somewhere in Morocco with my brother and they may have heard the news from my sister," says Kiran casually.

Was it superstition that made her turn down her mother's suggestion to wear a sari for the awards ceremony? "Perhaps," says Kiran. "I just didn't want to think about it too much, that's why I didn't even prepare a speech." In fact, as she confessed to Outlook, she spent the tense two hours while the judges were behind closed doors deciding the winner among the six shortlisted books watching the reactions of her publishers and editors. "My UK and US editors were the most nervous, they just couldn't relax. But my Indian publishers (Penguin India) were the sweetest. They kept reassuring me that I was a winner, even if I didn't win the prize."

So how does it feel to be transported in a moment from a writer who spent the better part of the last eight years sharing an apartment in Harlem with assorted flatmates who quarrelled about who stole their lunch or dinner from the common refrigerator to becoming literature's most famous—and potentially richest—star of the year? "I don't feel any different, though it's a mad rush just now to get through the back-to-back interviews before I catch a plane to Germany in the next two hours," says Kiran. "It's not like winning the Miss Universe title, I feel very much a part of the books world and don't see how anything will change. Except perhaps now I can afford to rent an apartment of my own."

Kiran, who was born in Chandigarh, lived in Kalimpong "with the Bengali half of my family", attended convent schools first in Kalimpong, where Inheritance is set, and later in Bombay and Delhi's Loreto Convent, says: "I did not start writing till I was 20. I was a science student. But when I began writing stories I immediately loved it so much. The first book (Hullabaloo in the Guava Orchard) was spent just in the happiness of that realisation, that this is what I wanted to do. The second time was more difficult: realising what a writer's life really is. It can't be healthy—this solitary life, disappearing for years into the book and characters you are writing about. And I wasn't entirely sure that I was committed to it. I was much more shaky about what I wanted to do than I was even 10 years ago."

About the book that won her the Booker, Kiran says, "I'd have never written this book if I were aiming for the bestseller list. It's a very dark book for one."

Kiran, who in her Booker speech said she owed her mother "a debt so profound and so great that this book feels as much hers as it does mine", spent one memorable snow-bound winter while she was writing Inheritance holed up with her mother in the countryside. "The whole day would pass without either of us saying a word until dinner. Sometimes I'd ask my mother: wouldn't you like to go out? Meet more people? Talk on the phone at least? Come to New York? But she just looked at me and said: 'No, I'm perfectly content.' And she is, she does not need anybody." That's the kind of life Kiran is looking forward to resuming once the Booker glory fades.

How close does she feel to India, considering she left as a teenager, first to live in the UK and later in the US? "I am a Delhi girl at heart," Kiran insists. "I went to school here and left when I was 15. Most of the people I was friends with in Delhi are in the US now and so we all come back every winter and meet the same people all the time. We keep saying, 'Why are we meeting here when we meet all the time in New York?' But the Indian community in the US has grown so much that it feels very similar to Delhi."

If there's one thing Kiran is thankful for having bagged the Booker, it must be the fact that it's cleared a doubt that reared up soon after completing Inheritance: was she ready to embrace a writer's solitary life for the rest of her life? "The twenties are a period of such confidence and knowing what one wanted compared to the thirties," she had confessed to Outlook only 10 months ago when she launched her book in Delhi this January. Now she's sure that there's nothing she'd like better. "I am addicted to going to my desk every morning. That won't change because of the Booker."

By Kalpish Ratna with Sanjay Suri in London