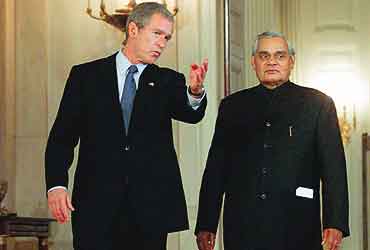 Is India a "won't do" country? An important slice of Washington seems to think so. Key US agencies are filled with disappointment and even anger at India's stand on two important issues that have wide implications—its refusal to send troops to Iraq despite indications from senior politicians, and its strong alignment with developing countries against the US at the Cancun trade talks. Old complaints about how India never misses an opportunity to miss an opportunity are being revived even as Indo-US relations are headed for better times on other fronts. The two issues have created an eddy of discontent, which could trap progress on other paths in an otherwise expanding relationship.

A third complication in the political cauldron is the impending purchase of 35 aircraft by Air India for which Boeing has made an aggressive pitch. A letter signed by 45 US Congressmen, including the co-chairs of the India Caucus, was sent to Prime Minister Atal Behari Vajpayee last month, strongly urging him to choose Boeing as a "great demonstration of strengthened commercial relations". The letter was a loud appeal and a pressure tactic. It went on to link US unemployment to the Boeing issue, adding an uncomfortable "friend-in-need" element. If Airbus wins over Boeing when the decision is finally made, American feathers will be further ruffled. Sources say the Boeing bid is "much higher", making the long-pending decision even more difficult.

The anger over Cancun and Iraq came spilling out at a recent round of Indo-US Track II talks. The Indian delegation got more than "an earful" from the US side, prompting questions about the two completely different versions of events.

It is no secret that senior Pentagon officials felt let down by India's refusal to send troops after what they thought were assurances to do so during high-level meetings. Hope built steadily in...