A nine-year-old tells his story of escape and of his first lesson in survival: lies 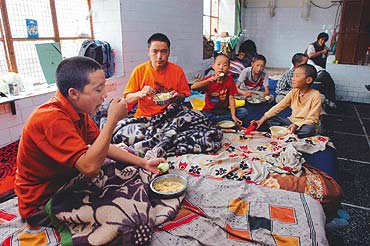 Ask nine-year-old Yeshi Chophel where he has come from, he is likely to tell you half-truths. "I'm from Lhasa and my parents run a small shop there," he told Outlook. But a little more probing revealed that Yeshi is actually from Markham in Eastern Tibet where his father is a nomadic shepherd. Some time in February this year, he left home for Lhasa with a group of nine other people from the village. From there, they hitchhiked for eight days, and then embarked on a 12-day trek across Himalayan passes, which brought his group to the Nepal border. During that gruelling journey his group travelled by night and hid during the day, and he often went hungry. "I am the only child of my parents and have come here to become a monk because in China I cannot do that," he finally admits.

Like most other children coming out of Tibet, Yeshi is wise beyond his years. He's learnt to tell lies and divert probing questions with false stories, because survival along the treacherous journey across the Tibetan frontier can often depend on how well one can bluff. Yeshi misses his mother. "I don't know when I will see her again," he says, adding, "Now I'm waiting for an audience with the Dalai Lama. My parents have told me he will take care of me."