"I Am Very Impressed With Ganguly"

Ganguly, with the kind of team he has, will come out trumps soon, says the Supercat. 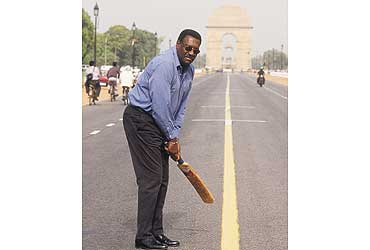 outlookindia.com
-0001-11-30T00:00:00+0553
No other batsman has ever hit the ball harder and no other captain has inspired as much awe and respect. Seventeen years after retirement, Clive Hubert Lloyd still walks the same way he used to amble up to the wicket with his heavy bat, nicknamed Big Bertha. He still has that famous slouch, and the spectacles, and the bemused expression. Cricket, he says, runs in his blood. It has to—7,500 runs, 19 centuries, an amazing average of 46.67. He led the Windies to two World Cup victories and built a near-invincible team which, under him, played 74 tests, won 36 of them and lost only 12. In the capital last week to launch the Electrolux Kelvinator Wisden Indian Cricketer of the Century awards, co-sponsored by Outlook, the man known as Supercat speaks to Sandipan Deb and Bobby John Varkey about all things cricket.

What, in your words, are these awards about?
They are about Indians who had the most impact on the game in the last century in four categories—cricketer of the century, batsman, bowler and the team of the century. Each of the 35-member jury will give five names. The top choice of each member will be awarded two points and the rest will get a point each. The jury includes Imran Khan, Richie Benaud, Richard Hadlee, Nawab of Pataudi, Dravid, among others. It's going to be a tough choice—we are not limiting ourselves to the current performances. We have been asked to set aside any biases vis-a-vis our own region/era. It is not just about runs but also about personality, leadership qualities, character and the impact on the public. The winners will be announced during the first India-England Test at Lord's in July.

But how do you compensate for the fact that cricket today is very different from what it was, say, about two decades ago?
It is different, of course. I guess we will have to look at their Test records. It is not about considering a player only because he has made X number of runs. What also matters is the number of Tests he's played, under what conditions and against which bowlers did he make his runs, his role in winning matches, etc. Also, his contribution to Indian cricket.

Would you say that too much of cricket is robbing the game of its charm?
I think the situation has gone mad. It has gone out of hand. Maybe that's why we have so many injuries. What we need is a good structure of cricket for, say, a three-year period so that the players play only when they are fully fit. That's the only way we can see them at their best. Look at New Zealand playing in Pakistan in the heat of May. They are playing against one of the best teams in the world without six of their top players. The point is that New Zealand is not among the top teams today only because they have lost far too many of their match-winners to injury. Astle, Cairns and Bond.... Even McMillan was injured in Sharjah. One more injury, and their manager will have to come out and field!

But with so much money riding on cricket, do you see the number of matches going down in the future?
I don't know. The point is, why play just for the sake of playing? If I go on like this, I'm not giving my best at the end of the day. Also remember, you are shortchanging the public because they've come to watch you at your best. Players today are asked to do too much. In any given season, there are at least four different matches happening simultaneously. It's confusing! Somebody rightly said recently that we are playing so much that defeats don't mean much to us any more!

Why did West Indian cricket go into decline?
It is very sad but I think we got complacent. We have failed to nurture the talent we had. I have been calling for an academy for the last 10 to 15 years but nothing has happened. It is very important to teach the boys, give them an impetus to win and discipline them.Otherwise, they will gravitate to other sports—a lot of West Indians are today playing football. Look at the number of basketball courts we have in Antigua! After all, cricket is an expensive game to play. You need a large ground, levelled pitch, equipment. For basketball, you need only a small strip of land, a hoop and a sweatshirt.

After Walsh and Ambrose, do you see anybody carrying the West Indian legacy of fast bowlers forward?
No one in the lot we've got today. Sanford is good but again, at 26, he's pretty late for a fast bowler. Dillon and Black are not fast bowlers. They are only medium pacers. I guess we also need something on the lines of the MRF Pace Academy you've got in India.

You didn't have a very happy time as team manager...
We did well in the two innings I had as manager. But then the strange strategy of changing managers started. The board became complacent and brought in a whole set of people. Cricket kept sliding in the meantime and they noticed it only when it couldn't be revived from there. Also, I didn't have much say in choosing the team. They said that you can't be both manager and selector. Strange. We did a lot of wrong things and all that is showing now.

There is a sense that the present Windies batsmen like Lara, Hooper and Chanderpaul are underachievers...
I wouldn't call Lara an underachiever! (laughs) He may not be as consistent as Tendulkar. Sachin's made differently—he still enjoys his game and has that zeal to do things all the time. Hooper is an underachiever but he seems to getting out of it. But at 35 I don't know how much he can do now. But I was quite impressed with Chanderpaul. He's the star to watch out for.

What's your forecast about the India-West Indies series?
India enjoys a slight edge because of its superior bowling strength. Still, it is going to be a keenly-contested series. It is nice to see that a few of the Indian players are running into some good form at the right time. We don't have bowlers who can penetrate and dismiss the opposition often. Remember, you have to take 20 wickets in a match and the West Indies fast bowlers struggle to do that. The Indians seem to have got a measure of the sluggish pitches here. They are also playing pace bowling pretty well.

Still too much of a dependence on Tendulkar,you'd say?
But Dravid too is good and it's nice to see Ganguly back among runs. Your bowlers are doing pretty fine.

You led by example. How would you rate Ganguly by your yardstick?
I am very impressed with the way Ganguly has been marshalling his resources—going up to the bowlers and guiding them. He's doing that to even senior players like Srinath. I don't see anything wrong in that. That's what a captain is expected to do. You can only win from what you have got and I believe that Ganguly, with the kind of team he has, will come out trumps soon.

Regarding Shoaib Akhtar's 100 mph speed, would you say any in your days were as fast but were never clocked?
Michael Holding was pretty quick in his time. Malcolm Marshall too was sharp. I believe that at one stage both of them were very close to, if not more than, the hundred mark.

Who would you put your money on for the next World Cup?
A full-strength New Zealand, Australia, Pakistan and India. And then there's South Africa and Sri Lanka. Talking of one-dayers, none of these teams are too far apart.