'I Am Trying To Live On'

Rather than taking revenge, Gladys would continue the good work of her late husband 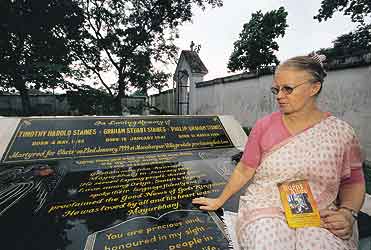 outlookindia.com
-0001-11-30T00:00:00+0553
Gladys June Staines was conspicuous by her absence in court on the day the judgement was delivered against Dara and the 12 co-accused in the murder of her husband and two sons. Calm and composed, Gladys says she does not see any point in taking revenge and would rather continue the good work of her late husband. Excerpts from an interview to Outlook:

You've said you've forgiven Dara Singh. Do you really not feel angry or want the killers punished? Or are you just being careful?
It's not a question of being careful. I just find it difficult to describe how I feel about what happened...it is indescribable. I know it is very human to feel angry. All of us do. But what am I going to get by raving and ranting? What am I going to get by seeking revenge? The truth is, my husband and my sons are gone. They're never going to come back, no matter what I do. I'm trying to live a life without them. I do what I think will alleviate my suffering and of those around me.

You seem a little harassed by the media's constant attention...
I do get a little hassled. Not so much by the media's presence around me but this constant need to publicise each emotion that I feel. It seems like someone's monitoring everything I feel. It gets a bit daunting. Otherwise, I am not complaining about the media. They have been sympathetic. Most importantly, the leprosy home we're running gets some attention in the process.

Why did you decide to stay on here? Don't you feel lonely and cut off in this remote district of Orissa?
I could have gone back to Australia. But you see, Graham just died and I was left here with his people. There was this driver who saw them being burnt alive. He tried to rescue them, kept pouring water but the mob beat him up. He'd have been killed too had he not run away. He came here and cried like a baby. He kept saying sorry that he couldn't save them. These people understood my grief. They really did. There was no one in the world who understood it the way they did. I'm not saying I'll stay here all my life. Who knows what will happen in the future? But right now I am here. It doesn't mean I don't get lonely. I do. Sometimes, I feel such longing...pain. Such helplessness. But then I come here to the leprosy home. They look at me with love. It's comforting. It helps not to think of that dark day. I try not to think about it very often.

You husband worked for the leprosy patients since 1965. He nursed people abandoned even by their own families. And he got killed for it. Don't you feel the slightest bit of antagonism when you deal with people here?
I just can't reconcile with the fact that Graham was killed here. He meant so much to the people, so many cried when he was killed. And yet...to tell you the truth, I was very disappointed. I felt let down. But even that is not true. I mean, he was killed in Manoharpur which is about 170 km from here. I don't think anyone here could think of doing such a thing.

I've been here a long time. In fact, I met Graham when I came here as a part of some programme despite the fact that Graham's home in Australia is barely 40 km from where I lived. I came again and we decided to get married. I've spent the best years of my life here with the children and Graham. We went for a holiday just a few months before all this happened. Everything was magical. And then everything came to an end. Now I have a life with the people who have helped me get over the darkest period of my life. It's not that they need me, I need them more. My daughter Esther is studying in Ooty. She plans to study medicine in future. You see, life goes on.