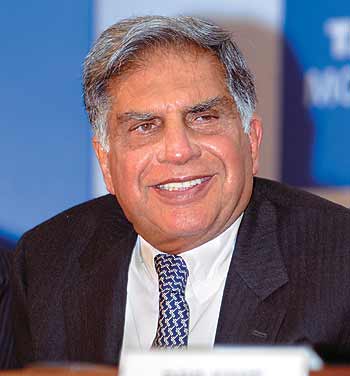 Niira Radia (NR): So, you’re still in the Middle East?

Ratan Tata: Yeah. I am still in Israel.

RT: Yeah. It didn’t do anything one way or the other. I guess the only concern I have is that Maran is going hammer and tongs for Raja. And I hope Raja doesn’t trip or slip or...

NR: No, he hasn’t, because the chief justice has issued a statement that no minister called the high court justice. (A Madras High Court judge had alleged that a Union minister had tried to influence him, and Dayanidhi Maran immediately pointed fingers at A. Raja.)

NR: The Chief Justice of India has issued that statement. So that is clarified. And in any case that did not happen and Maran is made to look a little bit of a fool.

NR: And, in any case, if something did happen, it would bring Kani (Kanimozhi) into that position, not Maran.

NR: In any case, it was the president of the bar association who said that in open court.

NR: Round II of the telecom battle has started. I don’t know how many more battles there will be.

RT: I’m surprised that Raja after all that you supposedly did for him is playing this game.

NR: I explained to Kani. I met her yesterday on the way back home last evening. I told her, Kani, this is what is happening. She told me I’ll call him and tell him to behave. He (Raja) very clearly told me, ‘Tell me, Niira, how can I go against the court order?’ So I said, ‘Hello, Mr Raja, you can go against the court. You don’t have to go by what the court said because 4.4 (megahertz) is what the licence entitlement is and it’s for you to interpret.’ So there is this little game going on.

RT: But now with the new attorney-general or whoever he is...

NR: No, Ratan, that’s a good thing. I’ll tell you why—because he can only handle constitutional matters. The solicitor-general is the gentleman—I told you about the swimming pool thing—Gopal Subramaniam. He’s the guy who will be doing the interpretation. I’m going to see him. I sent him a message and he said he will call back at 5.30-6 when he gets free and is home. So I will be briefing him.... Actually, he hates them (the Anil Ambani group). I’m not sure he’ll agree to what they say. He’s an upright person.... I think Raja will be trying to get in the AG. He briefed PM yesterday about 3G saying he wants to put up a cabinet note and doesn’t want to go to the GoM. They’ll do all this drama but I don’t think there’ll be 3G auctioning before March next year. They’re not gonna do it in a hurry. And the only reason they want to do 6.25 (MHZ) for Anil is so that he can get AT&T to buy into his company. AT&T is talking to him right now, Ratan.

NR: Yeah, coz he needs an equity partner otherwise he can’t survive with the debts he’s got. His avenues have closed unless he fudges some other things and raises money.

RT: Why isn’t all this exposed?

NR: Ratan, they’re buying up the media. They’re using their buying power with the media. For every ad they place...I can’t tell you the discussions I have had with the media, in particular the Times Group and Dainik Bhaskar—the Aggarwal guys who you met....

‘How Do I Make Dad Understand? He Doesn’t Understand...’