And damn you if you dare to differ. That's globalisation. Time, then, to stand up to the West and do our own thing. 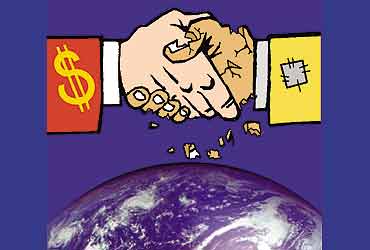 I must warn my readers that my intellectual capabilities are not what they used to be. While things used to come to me in a flash in my younger days, I had to spend some time thinking of a title for this article--'The East India CompanyXP',  Speak Global, Act Local, and 'How to make fools (of people) and still influence them' seemed like natural choices--but then, I said, what the heck, a rose by any other name would be as beautiful, and therefore, logically enough, a bad article by any other title would be as unreadable. So, there.

The matters at hand are the new principles of doing business in a privatised and globalised economy. Please note that these principles are applicable only for the developing and the under-developed countries; the developed ones have already perfected privatisation of public policy into a fine art. The uninitiated may kindly look up the website for the Center for Responsive Politics, insights Guaranteed.

Some readers may want to question my competence to write on such matters. If they look at the issue in a bookish manner, yes, I am not an Expert. On the other hand (Thank God for other hands!), if they were to check up the Constitution, they would find that all of us enjoy the right to freedom of speech. Speech not as the technical and legal jargon beyond the understanding of millions of ordinary citizens of this country, but speech defined as a form of communication that ordinary people can understand and identify with. Speech the way it was meant to be.

The 'Idea of Globalisation' has always fascinated me, right from my last years at IITD when pink papers had just caught on the fancy of an entire young generation. Some of my batchmates--those of us who were stupid enough to stay back--and most of my juniors used to gather religiously at the Common Room, and would spend hours trying to make sense of stock markets and options and convertibility (strictly of the non-religious variety).

The whole thing was innocent, and fun. But as some years passed by, somehow the innocence kept getting lost. As one later found out, the Idea of Globalisation is not about some oh-so-cute philosophy of equal or fair treatment, instead, the whole show is really about who negotiates better, regardless of the means employed. I was particularly intrigued by the fact that while everyone was talking about removing restrictions on movement of capital and goods, about allowing the prices of certain factors of production to be determined by global supply and demand positions; I found absolutely no debate on globalisation of labour markets--on the freedom of movement of people across countries. This freedom of movement cannot remain a non-business issue, labour is a factor of production as important as the rest of them; and therefore, restrictions on labour movements have implications no less critical than restrictions on capital movements or movements of finished products.

I remember raising this matter at a dinner hosted by Ruchir in a basement hotel in NOIDA. He was holidaying in India after commissioning a software project abroad, Manoj was busy setting up a Data Entry Firm, Bunny was back after completing his MBA from Melbourne University, Shailesh was with IBM in Delhi, and I had just quit IIMA to compete for the Civil Services. As we discussed hostel days and Ayn Rand and Babudom and girlfriends, I remember asking their views on this matter that had been troubling me, namely the place for globalisation of labour markets in the rhetoric that was going on. I don't think we arrived at a satisfactory answer then, and as I found after having talked to them while writing this article, we still don't have one.

The first principle I shall call, Definition-Changing . The concept is about turning things on their heads- what Nazis did so well, only that they got caught. The Brave New World is one where if you don't cave in to the illegal demands of big firang industry (incidentally located in ridiculously small islands), you are not creating the 'Right Investment Climate'. Where examining MOUs heavily biased towards private companies and suggesting pro- public interest modifications is termed as 'Red-Tapism'. Where bailing out badly managed major industrial corporations using techno-legal jargon and unscrupulous means is called 'Debt-Restructuring'. And where sale of public equity in profitable enterprises to dress up lossy budget proposals is termed as 'Privatisation'.

The second principle that propels this fools' paradise is Outright Hypocrisy . It is closely related to, but not the same as Definition-Changing. There is nothing complicated about the concept, even a ten- year old child can point this out to the exclusion of editors of pink newspapers. Hypocrisy is basically saying I am OK, You are not OK, when frankly, both of us are doing the same things.

The story gets repeated in the political sphere, the connoisseurs would have noticed that the people who now drop in uninvited to 'assist' in sorting out our border problems are the same ones who once proudly displayed signs saying 'Indians and Dogs are not allowed'; the people who now repeatedly dump advice on Human Rights are the same who meticulously wiped out an entire race of proud Indians; the people who now preach restraint are the ones whose economies depend on defense production and logically and practically enough, on wars. I can bomb anyone I like, the rest of the world must discuss matters over a cuppa tea.

The third principle is called Stealth-Bombing . These Stealth-Pilots have to be real experts, preferably of the Cable-Guy variety. Business begins with offering channels for free, and once the target audience gets hooked, by milking them dry by raising prices at least four times in two years. You don't have to be a media hotshot for doing this, the 'best' software companies in the world have been doing this for years, International Funding Agencies do this regularly via low-interest 'developmental' loans, and the biggest GM seed companies are beginning to do that now. They get in uninvited, unnoticed, and before you can say Mummy!, your indigenous varieties have been wiped out forever. Big Daddy can now get in and begin dictating prices. Research costs money, and researchers also do, but Hey! I've got deep pockets and a shallow conscience and the combination is deadly.

The last tactic, if everything else fails, is Downright Terrorism . Keep a gun on a Nation's dreams, offer roses to its neighbours, and the job is done. Sometimes you don't even have to offer roses to anyone, just the threat of economic sanctions and investment blackouts can force the execution of heavily loaded PPAs. To hell with World Trade Bodies and Trade Dispute Resolution Mechanisms, James Bond has the License to Kill, and He shall.

The principles are thus simple enough. We needn't be surprised with them, our own History has been replete with the use of Saam, Daam, Dand and Bhed; they are all that are being used now, only the language is more technical, the print is finer, and the objectives more sinister. The potion for success is also simple enough; those who negotiate better are the ones who will win the economic wars.

It's sickening to hear people say: Globalisation is better in the long run, only that people have to face hardships in the short run; Short Runs are all we've got, and all that we are concerned with, since in the Long Run, everyone's dead. Not really though, our future generations will survive, but only if we stand up today and understand the games that are being played with our lives and the lives of our grandchildren.

Let us then not be apologetic with the structure of our economic systems; what has worked in the West will not succeed in a land of millions of impoverished rural people. The solutions will be different for us, and the solutions will have to begin with standing up to those who are only speaking Global.

Sandeep Verma is from the 1993 batch of the IAS. The views expressed here are entirely his own. A shorter version of this article appeared in the print magazine.