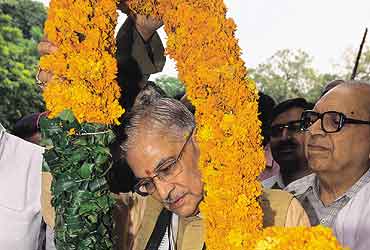 outlookindia.com
-0001-11-30T00:00:00+0553
Dr Murli Manohar Joshi is the man in the eye of the latest storm in the BJP. With the media virtually barricading his house since the day he announced his resignation, the HRD minister is having a tough time fending anxious queries. Excerpts from an interview:

If you cast your mind back to December 1992, was there a difference in your and Mr Advani's actions? Why has he alone been exonerated?
This is the magistrate's interpretation. And now lawyers will be looking at the order. They'll find out whether the circumstances in which this order has been passed apply to others also. And then we'll take the view of the superior court to agree or disagree with the interpretation of this order.

There are whispers that a "special deal" was made for the deputy PM?
This is a very far-fetched idea. And a mischievous one.

Do you think there's a deliberate move by some people to marginalise you?
I am in the party because of my own work and my own commitment to the party. Nobody else has brought me here that they can marginalise me. It is through my own actions that I am here.

But recently the BJP president failed to invite you for an important meeting at his house....
I have been a minister and I was busy with my ministry. If the party feels I am needed somewhere, they will call me. If they don't think I am needed, they will not call me.

There is an impression that the rss is not backing you this time?
No, no. The Sangh is supporting me. Confusion has just been created.

If the PM asks you to withdraw your resignation, will you do so?
I am not saying anything now. Any decision will be taken after the PM comes back. I am only saying that he has asked me to wait, and I will wait.

It is often said that the cabinet is packed with Advani men. There is even a group of Pramod Mahajan loyalists but very few people speak for Mr Vajpayee. Do you see yourself as a Vajpayee man?
I am my own man. I say what I feel is correct. I am neither speaking for this or that but for what is correct. Many times I have said things that are not in conformity with the prime minister's views. As a minister, it is my duty to bring facts before the PM and the cabinet as I see them.

Do you see Mr Advani as the natural successor to Vajpayee?
In the party he is next to Mr Vajpayee.

A Quit Pro Quo That Wasn't