I Am But A Disembodied Voice, The Living Dead

What have I done that I can neither cross my own threshold nor enjoy human company? 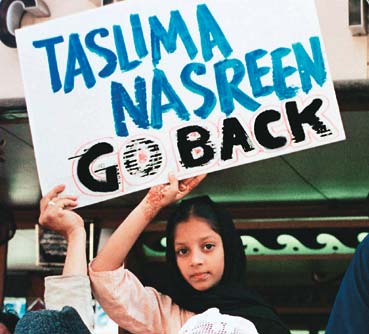 outlookindia.com
-0001-11-30T00:00:00+0553
Where am I? I am certain no one will believe me if I say I have no answer to this apparently straightforward question, but the truth is I just do not know. And if I were to be asked how I am, I would again answer: I don’t know. I am like the living dead: benumbed; robbed of the pleasure of existence and experience; unable to move beyond the claustrophobic confines of my room. Day and night, night and day. Yes, this is how I have been surviving.

This nightmare did not begin when I was suddenly bundled out of Calcutta—it has been going on for a while. It is like a slow and lingering death, like sipping delicately from a cupful of slow-acting poison that is gradually killing all my faculties. This is a conspiracy to murder my essence, my being, once so courageous, so brave, so dynamic, so playful. I realise what is going on around me but am utterly helpless, despite my best efforts, to wage a battle on my own behalf. I am merely a disembodied voice. Those who once stood by me have disappeared into the darkness.

I ask myself: what heinous crime have I committed? What sort of life is this where I can neither cross my own threshold nor know the joys of human company? What crime have I committed that I have to spend my life hidden away, relegated to the shadows? For what crimes am I being punished by this society, this land? I wrote of my beliefs and my convictions. I used words, not violence, to express my ideas. I did not take recourse to pelting stones or bloodshed to make my point. Yet, I am considered a criminal. I am being persecuted because it was felt that the right of others to express their opinions was more legitimate than mine.

Does India not realise how immense the suffering must be for an individual to renounce her most deeply-held beliefs? How humiliated, frightened, and insecure I must have been to allow my words to be censored. If I had not agreed to the grotesque bowdlerisation of my writings by those who insisted on it, I would have been hounded and pursued till I dropped dead. Their politics, their faith, their barbarism, and their diabolical purposes are all intent on sucking the lifeblood out of me, because the truths I write are so difficult for them to stomach. How can I—a powerless and unprotected individual—battle brute force? But come what may, I cannot take recourse to untruth.

What have I to offer but love and compassion? In the way that they used hatred to rip out my words, I would like to use compassion and love to rip the hatred out of them. Certainly, I am enough of a realist to acknowledge that strife, hatred, cruelty and barbarism are integral elements of the human condition. This will not change; and how can an insignificant creature like me change all this? If I were to be eradicated or exterminated, it would not matter one whit to the world at large. I know all this. Yet, I had imagined Bengal would be different. I had thought the madness of her people was temporary. I had thought that the Bengal I loved so passionately would never forsake me. She did.

Exiled from Bangladesh, I wandered around the world for many years like a lost orphan. The moment I was given shelter in West Bengal, it felt as though all those years of numbing tiredness just melted away. I was able to resume a normal life in a beloved and familiar land. So long as I survive, I will carry within me the vistas of Bengal, her sunshine, her wet earth, her very essence. The same Bengal whose sanctuary I once walked many blood-soaked miles to reach has now turned its back upon me. I am a Bengali within and without; I live, breathe, and dream in Bengali. I find it hard to believe that I am no longer wanted in Bengal.

I am a guest in this land, I must be careful of what I say. I must do nothing that violates the code of hospitality. I did not come here to hurt anyone’s sentiments or feelings. Wounded and hurt in my own country, I suffered slights and injuries in many lands before I reached India, where I knew I would be hurt yet again. For this is, after all, a democratic and secular land where the politics of the votebank imply that being secular is equated with being pro-Muslim fundamentalist. I do not wish to believe all this. I do not wish to hear all this. Yet, all around me I read, hear, and see evidence of this. I sometimes wish I could be like those mythical monkeys, oblivious to all the evil that is going on around me. Death who visits me in many forms now feels like a friend. I feel like talking to him, unburdening myself to him. I have no one else to speak to, no one else to whom I can unburden myself.

I have lost my beloved Bengal. No child torn from its mother’s breast could have suffered as much as I did during that painful parting. Once again, I have lost the mother from whose womb I was born. The pain is no less than the day I lost my biological mother. My mother had always wanted me to return home. That was something I could not do. After settling down in Calcutta, I was able to tell my mother, who by then was a memory within me, that I had indeed returned home. How did it matter which side of an artificial divide I was on? Now, I do not have the courage to tell my mother that I have been unceremoniously expelled by those who had once given me shelter, that my life now is that of a nomad. My sensitive mother would be shattered if I were to tell her all this. Instead, I have now taken to convincing myself that I must have transgressed somewhere, committed some grievous error. Why else would I be in such a situation? Is daring to utter the truth a terrible sin in this era of falsehood and deceit? Is it because I am a woman?

I know I have not been condemned by the masses. If their opinion had been sought, I am certain the majority would have wanted me to stay on in Bengal. But when has a democracy reflected the voice of the masses? A democracy is run by those who hold the reins of power, who do exactly what they think fit. An insignificant individual, I must now live life on my own terms and write about what I believe in and hold dear. It is not my desire to harm, malign, or deceive. I do not lie. I try not to be offensive. I am but a simple writer who neither knows nor understands the dynamics of politics. The way in which I was turned into a political pawn, however, and treated at the hands of base politicians, beggars belief. For what end, you may well ask. A few measly votes. The force of fundamentalism, which I have opposed and fought for many years, has only been strengthened by my defeat.

This is my beloved India, where I have been living and writing on secular humanism, human rights and emancipation of women. This is also the land where I have had to suffer and pay the price for my most deeply held and fundamental convictions, where not a single political party of any persuasion has spoken out in my favour, where no non-governmental organisation, women’s rights or human rights group has stood by me or condemned the vicious attacks launched upon me. This is an India I have never before known. Yes, it is true that individuals in a scattered, unorganised manner are fighting for my cause, and journalists, writers, and intellectuals have spoken out in my favour, even if they have never read a word I have written. Yet, I am grateful for their opinions and support.

Wherever individuals gather in groups, they seem to lose their power to speak out. Frankly, this facet of the new India terrifies me. Then again, is this a new India, or is it the true face of the nation? I do not know. Since my earliest childhood I have regarded India as a great land and a fearless nation. The land of my dreams: enlightened, strong, progressive, and tolerant. I want to be proud of that India. I will die a happy person the day I know India has forsaken darkness for light, bigotry for tolerance. I await that day. I do not know whether I will survive, but India and what she stands for has to survive.

Taslima Nasreen is an exiled Bangladeshi writer who was forced to leave her home in Calcutta in November, and put under police protection at an undisclosed location.

Chasm At Our Feet