'I Am Allah's Handmaiden'

The controversial writer who now likes to be called Dr Kamala Sorayya whom Kerala knows as Madhavikutty, on her conversion to Islam.

She might be 65 now, but ever since Kamala Das shocked middle-class morality in the seventies by penning her bare-all My Story, she’s reinforced her irreverent image with a corpus of poems and paintings - documenting the female quest for fulfillment - that established her as a person with a hugely respectable talent for saying disrespectful things. All this sent Kerala society into a tizzy but also earned her literary prestige. Today, Madhavikutty, as Kerala prefers to call her, has shut the door on her past. Widowed and lonely, she finds security in the ‘rigidities’ of Islam. Venu Menon spoke to her in her apartment in Kochi. Excerpts: 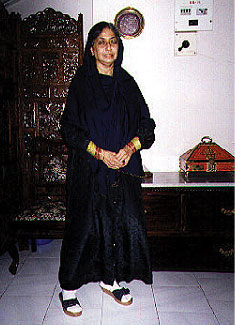 What do we call you now?
Preferably Dr Kamala Sorayya. But whatever you do please don’t call me aunty. I’m a smart-looking woman. I can go to any auditorium and be scintillating. And some fat woman who does nothing but overeat comes and calls me aunty. It’s so insulting.

You say you walked around in purdah long before you converted to Islam.
That’s right. I started wearing the purdah in ‘72, when I went to the bazaar or to the movies. I wore it for privacy. I didn’t want to show myself.

You never thought of conversion then?
I did. But my husband put it off. He said I wasn’t mature enough yet to seek another religion. Play with Krishna a while longer, he told me.

Is Krishna out of the picture now?
He travels with me wherever I go. Krishna wasn’t a god for me. He was supposed to be my husband, according to my grandma. So I carried on with the belief that I was really married to Krishna.

That’s it?
Well, you can’t have a good smile and not have character.

Was conversion a precondition for marriage?
Not at all. He’s liberated. In fact, he is amused that I wish to be in purdah.

If not the wedding, then what triggered the conversion?
I was waiting for a sign from Allah. It came when I was travelling by car from Malabar to Thrissur. I saw a pale butter-coloured sun at 7 pm - the sun at dawn appeared to me at dusk. The sky had changed. That was enough for me. Allah was ready to take me in.

Were you disillusioned as a Hindu?
No. I consider Hinduism to be a lenient, large-hearted religion. I was drawn by Allah’s compassion.

Did you find a lack of compassion in Hindu gods?
As a child I listened to stories of vengeful gods who punished you for your sins. There’s something gruesome about it.

You are not known to respect orthodoxy. Are you ready for the rule-bound life that lies ahead?
I have given up my freedom, it has made me feel so shabby. Islam is not a lenient husband. Islam is rigid, very stern, I think of Allah as my master. I am his subservient handmaiden. I delight in being subservient. I always wanted to feel humbled. No man could humble me. Allah could. I feel like a harem girl before her master.

Will you be subservient to your husband?
Of course not. If the chap tries to be my master, I will say talaq and send him off.

If your husband has other wives will you feel upset?
I would feel relieved because it would save me from physical damage. If I was his only wife, he would come to me every night. It would tire me out at my age.

Will Sorayya write like Kamala Das?
No. Religion should not permit a woman to write nonsense like My Story.

Is Sorayya disowning the writings of Kamala Das?
Sorayya has nothing to do with Kamala Das. It’s a new life altogether. Sorayya will not make the same mistakes made by a girl called Kamala Das who was given away as a bride at 15.

You were fond of painting female nudes. Will your brush too lose its passion?
It is impossible for me to draw a nude now. That is haram in Islam. No, you can’t buy any more of my nudes. That’s over. You can’t have fun all your life, can you? You must get out of kindergarten at some stage.

Have you discarded the body and embraced the spirit?
I love my body. I cherish it. I don’t know much about the spirit.Your religion expects you to keep your body under wraps.How can Islam know what is happening in the dark bedroom of my house?

Can we say Kamala Das, who celebrated passion in her poems and paintings, has finally been laid to rest?
Absolutely. Long live Sorayya.