'I Admit We Have To Work On Our Credibility Aspect'

On the agency he heads -- he took over as director when CBI was being criticised for its failure to crack several key cases, including the Aarushi Talwar murder and the Malegaon blasts case. 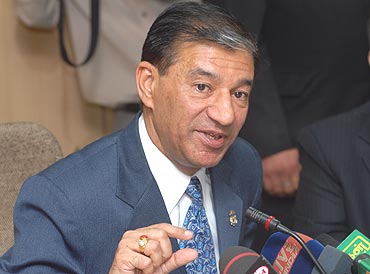 Jitender Gupta
Chandrani Banerjee December 01, 2008 00:00 IST 'I Admit We Have To Work On Our Credibility Aspect'

outlookindia.com
-0001-11-30T00:00:00+0553
Ashwini Kumar took over as CBI director in August. His appointment came at a time when the investigating agency was being criticised for its failure to crack several key cases, including the Aarushi Talwar murder and the Malegaon blasts case of 2006. The CBI has also been asked to investigate the sensitive Ghaziabad PF scam involving judges of the Supreme Court, high court and district courts. Kumar spoke to Chandrani Banerjee. Excerpts:

There is a feeling that the credibility of the CBI is gradually getting eroded. Do you agree?

I have no hesitation in admitting that we need to work on our credibility aspect. We work in the public domain and are under the scanner all the time. However, the agency enjoys a high degree of faith because people do turn to the CBI if they feel injustice is being done and that they have not received a fair hearing. This is one area which requires improvement and hard work—to keep people's faith.
What is the progress made by the CBI in the PF scam case involving senior and junior judges?

We have registered a case after receiving directions from the Supreme Court. The investigating officer, Nirbhay Kumar, is working with joint director Alok Pateria in the case. We are using all the findings and papers collected by the Ghaziabad police as the basis of our investigation. As per the Supreme Court order, the agency is microfilming the findings. The assistance of the Institute of Government Examination of Questioned Document (GEQD) in Chandigarh and Shimla is being sought.

The Anti Terrorist Squad (ATS) in its investigations revealed the involvement of Hindu groups in the Malegaon blast case of 2006. Later, the case was taken over by CBI which ruled out any Hindu role. Why did the agency water down the case?

We are relooking at the whole thing. It would be unfair to say the agency watered down the case. Let's say that we are re-examining the whole issue with all the inputs we have received from the ATS in 2006.

Is the CBI working along with the Maharashtra ATS?

Yes, we are taking into consideration the inputs provided by ATS. The CBI is working along with ATS, it is a joint effort.

We haven't heard about the Aarushi murder case for sometime now. What is the status?

We will submit the complete details before the court once we are through with the investigations. I would not be able to share the developments because we have told the court that any information about the investigation will not be shared with the media.

Why are the conviction rates low in cases handled by the CBI?

Why is it that in many of the cases the CBI steps in late?

In the scheme of things, the agency comes later. It is a central agency hence the first opportunity (for investigation) is for the local police. The agency's role is supportive and hence it enters only when they (the local police) fail or require assistance.

Is there any truth in the charge that the CBI is a tool in the hands of the government of the day?

There is no iota of truth.... I would not call the agency a tool in the hands of the government of the day nor is there any (political) influence. The agency is independent and it works like an autonomous body.