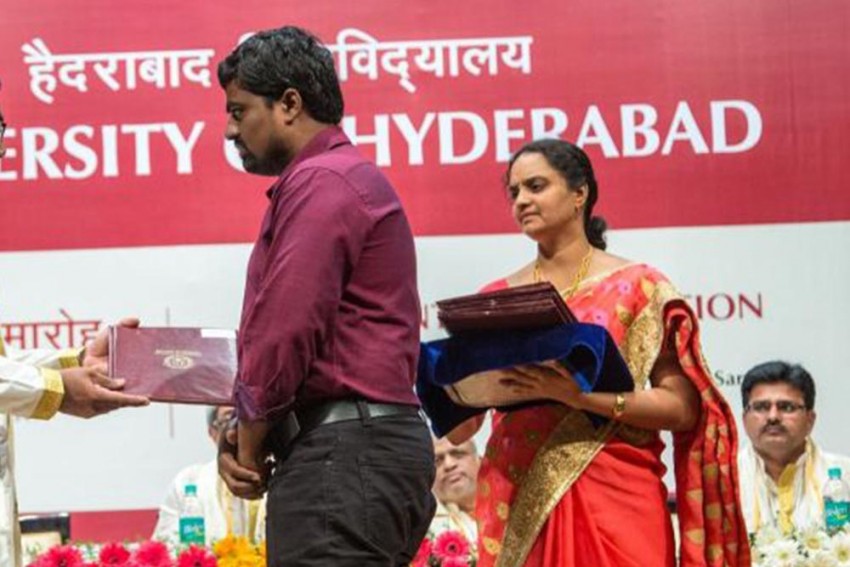 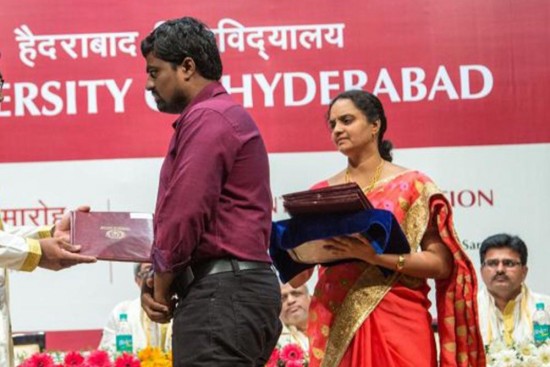 It was not pre-planned. It was a decision I took after entering the auditorium on October 1­. I had ­received many degrees in my academic life and had never made an issue out of it. But here I had a problem because my PhD degree was being given away by Appa Rao, vice-chancellor (V-C) of the University of Hyderabad. Since the chief guest at the convocation usually hands out the degrees, I had assumed that I would receive my degree from a dignitary other than the V-C on the occasion.

Therefore, when I figured out that Rao would hand over the degree to me, I informed the ­security officer that I would not accept the ­degree from him, requesting him to inform the V-C about it. “It is not my job,” he snapped at me. Two people were already in the queue to collect their degrees ahead of me. When my turn came, I told the V-C that I did not want to ­receive the degree from him. He brushed it aside, asking me to take the degree. “We’ll discuss it later on the campus,” he suggested. “If I take it now, what will we discuss?” I asked him. He nodded but kept forcing me to accept it. When the impasse continued, he finally called the pro vice-chancellor to give it to me.

It was a simple decision for me primarily because of two reasons. First, the V-C was not fit to give away the degrees. He had suspended us under pressure from the then HRD minister Smriti Irani and another minister Bandaru Dattatreya to show his gratitude to the government which had appointed him. Second, he is yet to be exonerated from the criminal charges filed against him. I found it objectionable to accept my degree from such a person.

In 2002, when Rao was the chief warden, he had filed cases against ten Dalit PhD scholars following a small argument over hostel issues. They were all rusticated for two years, and subsequently eight of them had to fight legal battles. Later, when he became the V-C, he suspended five of us—all members of the Ambedkar Students Union—an act that, I believe, led to Rohith Vemula’s suicide.

It all began in August last year when the ABVP unit president lodged a complaint against us. On August 20, my room was locked up and I was thrown out when I was about to submit my thesis. I finally submitted my thesis on September 2 and left for home, only to learn of the punishment meted out to five of us—an academic suspension for a semester. It was later revoked on the condition that a committee would look into the matter. In November, Rao came in and started receiving missives from Irani and Dattatreya, as the ABVP leader had strong political connections. Subsequently, we were suspended again on December 18 without an inquiry. It wasn’t just suspension, it was a social boycott. We were only allowed to access the department and the library. We could not contest elections or shop inside the campus; basically, all our fundamental rights were taken away. We were treated as vellivadas, residents of the Dalit slums in the villages.

Rohith was a true Ambedkarite. He fought for his self-respect and was never ready to compromise even when the suspension came. He was fighting that too, and wrote a letter to the V-C the same day. He was quite forceful and committed to the cause. He waited for a month for a response from the V-C. Whenever we met in those days, he would express doubts over whether we would get justice under the existing system. A month later, he took his life.

My thesis was in philosophy—on consciousness and the mind-body problem. According to medical science, there is no difference between the mind and the brain but philosophy separates the two. The mind is an immaterial aspect like the soul but the brain is matter. I was trying to understand how they are related and how the immaterial mind can affect the material body. I am at present associated with IIT Bombay as a post-doctoral fellow, which is a ­res­­earch-based job. I want to continue with academics in the future and am looking forward to becoming a professor of philosophy.

When I told my friends what had happened, they were upset with me for not keeping them in the loop. But they made it very clear that they too would have done the same. I have no idea what I would have done had the V-C not asked the pro V-C to take over. I’d either have walked away or kept standing in protest.

Early this year, the police force was allowed to enter UoH with the intention of crushing the Rohith Vemula movement. Since then, Dalit unity on the campus has only strengthened.

The writer is a post-doc fellow at IIT Bombay, and had refused to accept his docto­ral degree from University of Hyderabad vice-chancellor Appa Rao.  The picture above captures that moment of protest.