Dabbu-dabbu-dabbu. That’s Hyderabad talk for how the city’s become the scam capital. 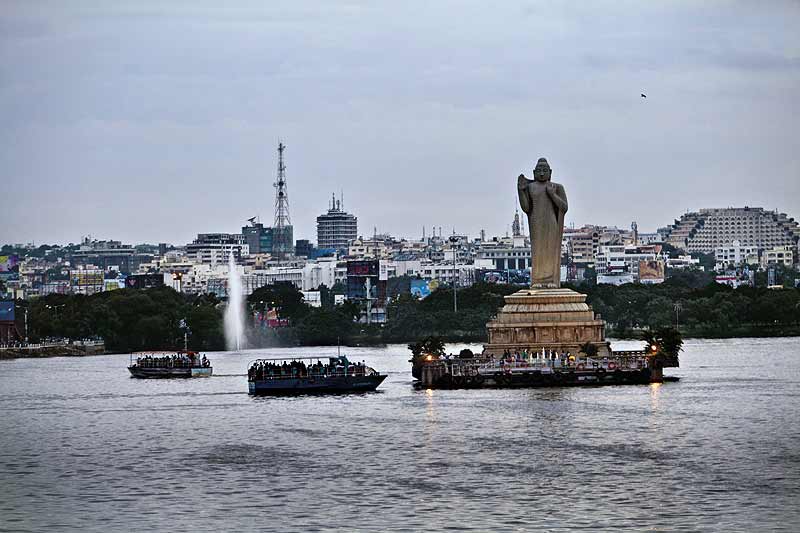 “Aao biriyani khilatun” is typical Hyderabad police lingo used while rounding up petty criminals. It’s an invitation for an altogether unpleasant stay that clearly does not include a portion of the city’s celebrated biriyani. And, going by the number of VIPs currently lodged in Chanchalguda jail in Hyderabad, the joke is the police will soon be placing orders for gilded plates of biriyani. There are at least 10 “special” prisoners, all accused in various scams—Jaganmohan Reddy, of course, remains the star visitor, followed closely by industrialists, bureaucrats, a former minister and now judges as well.

“It’s all part of the new liberalism, isn’t it? It doesn’t matter which political party is in power, they all do the same thing.”
J.M. Lyngdoh, Former CEC

Hyderabad, a city known for its grace, culture, openness to change and love for education, technology and commerce, is now the “scam capital”. A city that embraced globalisation with unbridled enthusiasm under the tech-savvy, laptop-flaunting Clinton-admirer Chandrababu Naidu, this “city of pearls” has now become a laboratory for scams. Take a look at the impressive list that tots up misdeeds worth hundreds of thousands of crores. From the collapse of the Global Trust Bank in 2001 to Satyam founder Ramalinga Raju shocking the world in ’08 to Deccan Chronicle’s strange meltdown, it’s evident that all is not well in Hyderabad.

In terms of scale too, you have to give it to Hyderabad—the sums involved are mind-boggling, the corruption seemingly endemic. So much so, it’s even started affecting popular culture. Corruption is now an accepted phenomenon, evident in the mass public support for Jagan Reddy. Rich kids who flaunt flashy gadgets are teased by their friends, “Kyun, tera baap scamster hai kya?” Only partly in jest, people have added Hyderabad’s love for money (‘dabbu’, in Telugu) to its well-known tag as the IT city—“dabbudabbudabbu” has replaced “www” as Hyderabad’s dotcom calling card. Why, adman and columnist Anvar Alikhan recollects how his Mumbai sharebroker, unaware of his roots, advised him, “Be very careful about investing in Hyderabad-based companies.”

There’s no shortage of recent evidence. Apart from the travails of Deccan Chronicle (see box), the Comptroller and Auditor General (CAG) has recently come out with a stinging indictment of Hyderabad-based GMR’s handling of the Delhi airport. More recently, the CBI raided offices of Navbharat Power in Hyderabad to investigate the company’s role in Coalgate. One of Navbharat Power’s promoters, Y. Harishchandra Prasad, is a widely respected industrialist who often holds forth in various round-table discussions about flaws in government and industry policies.

“The culture of entrepreneurism in the state encourages risk-taking. And the people of Andhra are inherent risk-takers....”
Shobana Kamineni, FICCI executive director

The triggers for Hyderabad’s scams are (not surprisingly) a combination of land, politics and greed. But what continues to amaze is the sheer scale of this loot: Jagan’s illegal assets were alone supposed to be worth over Rs 1,00,000 crore, and none of the scams listed on the previous page are less than $1 billion, about Rs 5,000 crore. How? Well, being a pioneer of money politics, Andhra Pradesh is naturally a fertile ground for scams, feels Lok Satta party president and MLA Jayaprakash Narayan. “Corporate activity is still feudal in AP. Locally grown entrepreneurs are too intimate with the political class. Since political parties invest huge money in elections, they have no option but to indulge in all kinds of irregularities,” he says, adding that since the media has become so polarised, “there is massive corruption and massive publicity as well.”

Member of the Legislative Council and political analyst Prof K. Nageshwar agrees that high economic growth, political manipulation of the economy and emergence of crony capitalism have created a class of people who want to use political power for windfall private gains. “As long as Satyam founder Ramalinga Raju was producing software, it was fine. But then he got into real estate and tried to make money through shortcuts. That caused his ruin. Similarly, in the case of Deccan Chronicle, as long as Venkat Ram Reddy was in the newspaper business, he did well. Trouble started with their speculative businesses and lavish spending,” he says.

—estimated as one of the highest in India—is also the cause of many ills. An MLA aspirant spends a minimum of Rs 5 crore and a prospective MP at least Rs 10 crore. Obviously, these MLAs and MPs will try to recover their expenses through corrupt means. The linear equation for politics in AP appears to be corruption+welfare=power. It doesn’t help matters that this corruption- and welfare-fuelled boom has created expectations in the middle class who want a share of the pie. “New money has created anomalies,” warns political scientist Jyotirmaya Sharma.

“The nexus between finance capital and politicians has led to a ruinous scenario. Governments are breaking the very laws that they make.”
Rama Melkote, Retd professor of Political Science, Osmania University

Apart from a few corporate scams, however, the bulk of problems have to do with AP’s drive to transfer public resources to private players. G. Haragopal, a professor with the Centre for Human Rights, University of Hyderabad, says that land-grabbing began in right earnest when the Telugu Desam came to power as there was a concentration of social, political and economic power in one class, the Kammas. “Y.S. Rajasekhara Reddy went a step further, began auctioning lands to fund his welfare schemes. But this was a one-time income. Naturally, funds had to come through other means. Welfarism gave YSR a good image and he began to rule ruthlessly, unleashing various scams,” he says. Sure, there were scams earlier too: the biggest scam that rocked the Chandrababu Naidu government was the Yeleru scam involving the construction of the Yeleru Canal in 1996 in Visakhapatnam district. Farmers were supposed to get enhanced compensation for the loss of their farmland. Politicians and bureaucrats sanctioned release of funds but the amount never reached them.

In this regard, it’s indicative that the state has the most number of operational SEZs in the country. “Land is the commodity where the scams take place. Apart from this, AP has a high number of mineral franchises and merchant power plants. Its coastline, 940 km, is very long. Roughly half of this has been given away to the private sector with exclusive sovereign rights over waters. What else can you expect but plundering of resources?” asks ex-Union power secretary E.A.S Sarma. Citing Vanpic as an example, Sarma says the hinterland of about 28,000 acres cutting across three districts has been gifted on a platter. The government even went to the extent of amending the laws meant to protect assigned lands in this case.

“Delhi remains the capital of all scams. Hyderabad still has a long way to go, it is just one man’s doing, Y.S. Rajasekhara Reddy.”
Narendra Luther, Author, historian and former bureaucrat

That said, not everyone buys into the concept of a Hyderabad school of scams. Sanjaya Baru, director for geo-economics and strategy at the International Institute for Economic Studies, says it is “completely unfair” to call Hyderabad a scam capital. The city, he says, has been an entrepreneurial capital in the last decade. Earlier, it was the Parsis, Chettiars and Marwaris who were the business communities. Now the Rajus, Kammas and Reddys have emerged as the new business community and AP has been the home of creative history. “Business history across the world is full of wrongdoings. It’s just that some of them are exposed. The fact that scams have been exposed and action taken is a good sign for AP,” says Baru.

This view has more takers. Like FICCI executive director Shobana Kamineni (daughter of Apollo Group’s Pratap Reddy), who asserts that the aforementioned moniker is an unfortunate term for a Hyderabad known for its gentility, Nizami history and classiness. Similarly, Shahed Hussain, a trustee of the HEH Nizam Trust, shudders once the topic is brought up and says that “scam is an undignified word to use”. Stating that such terms make him feel ashamed, Hussain says, “We are, by and large, honest people. I think that a majority of Indians have no role in these scams. We have a conscience. Let it stay that way.”

“It’s sad when people start calling it a scam capital. It’s not a good tag to have. I’d rather they call it a badminton powerhouse.”
P. Gopichand, Former national champion, Saina Nehwal’s coach

Kamineni wonders how a few scandals can lead the media to tar everyone with the same brush, stressing that this scam era will certainly not affect investments in the future. Unfortunately, all this scam talk couldn’t have come at a worse time for Hyderabad’s image. On the surface, yes, IT firms, MNCs and foreign banks have not deserted Hyderabad—but there is a staleness in the air. The worldwide recession, YSR’s death, the Telangana agitation and (to top it all) the unravelling of various scams have greatly affected the investment climate in the city.

Worse, an air of cynicism seems to be taking over. The well-regarded former CEC, J.M. Lyngdoh, who has made Hyderabad his home, simply shrugs the term ‘scam’ away. “It’s all part of the new liberalism, isn’t it? When the Telugu Desam was in power, they made money with the help of the NDA. Now the Congress has UPA at the Centre. It doesn’t matter which political party is in power, they all do the same thing.” Similarly, Parakala Prabhakar, political commentator who heads a brand consultancy in Hyderabad, RightFolio, blames the general ‘match-fixing’ between all political parties and even the media for the scams. He wonders whether the present scam probes will ever be taken to their logical conclusion. “After the initial noises about the scams, the Opposition and media keep quiet. It’s like a conspiracy of silence.” Sound familiar? Well, a few months ago, Kiran Bedi had during a visit called Hyderabad the scam capital. That stirred up a minor storm but it ebbed. The worrying thing now for many who love the city is that all this talk has started to smell a bit like stale biriyani.

In The Beginning Was The Loaded Word