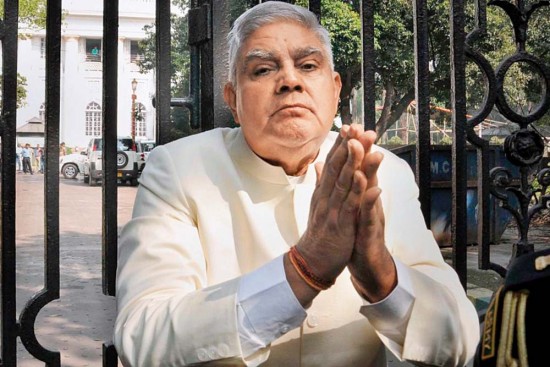 Two governors and their attitudes are a study in contrast. Uttar Pradesh’s Anandiben Patel never makes news; she didn’t even comment on the heinous murder of the Unnao rape victim. On the contrary, West Bengal governor Jagdeep Dhankar is forever in the mix. Within a few weeks of his assuming office, he rushed to Jadavpur University and ‘rescued’ Union minister Babul Supriyo from agitating students. It sowed the seeds of discord with the Mamata Banerjee state government. The relation has steadily declined, despite declarations of bonhomie on occasion, like Dhankar’s visit to Mamata’s home.

The state government has adopted an attitude of non-cooperation towards Dhankar. The governor went to north Bengal, North 24 Parganas and South 24 Parganas with the ostensible purpose of reviewing the administration, but district magistrates and other senior officials did not turn up. Later, Dhankar joked about receiving letters from all three DMs, saying they were ‘down with fever’. Then, at the Durga Puja carnival at Calcutta’s Red Road, Dhankar was seated on a separate stage, while Mamata and other guests sat on a prominent stage. A wounded governor later protested shrilly.