RSS man Ram Madhav's US talk tour sparks a debate: should he have been invited? 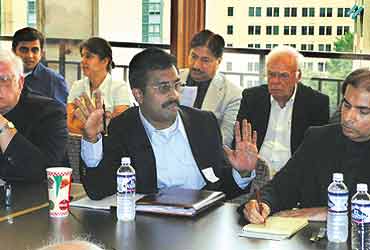 outlookindia.com
-0001-11-30T00:00:00+0553
In the end, Ram Madhav, national spokesman of the RSS, simply self-destructed in front of his university audiences with incoherent tumbles and bizarre leaps of mind. But the anti-Muslim message was clear in his narrative that careened from laments about high birth rates to rants about two theocracies pushing into India's borders from the east and west. Profusion and invasion were threatening democracy itself in India. He threw in Hitlerian terminology and regressive pronouncements about women to complete the montage. And, you didn't have to be a 'pseudo-secularist' or a 'Commie' to be outraged by the casual manner in which he joked about Gujarat.

Last week, Madhav spoke at Johns Hopkins University (JHU), accompanied by a band of bodyguards. The Madhav brigade intimidated, abused and hissed at student protesters handing out flyers saying "Stop Helping Hate. Stop RSS"—a perfectly normal activity on American streets and campuses. But apparently not for the RSS. A Madhav supporter snatched the flyers, crumpled them and threw them in a student's face. Another threatened to unleash the full power of the dreaded US immigration office and the Patriot Act-empowered police. During the talk, Madhav's brigade sat opposite him, including a man who had assaulted a student in the past for simply asking a tough question of the RSS ideologue. The intimidation tactics came to the notice of university officials later.

Madhav's presence on two prestigious university campuses has left a thick trail of controversy and rage, a war of petitions and many questions about what exactly he is up to in this month-long 'America darshan'. Should he have been allowed to speak at JHU and the University of Pennsylvania (U Penn) and wash off the blood of the Gujarat riots with a mere "it was an unfortunate event and we passed a resolution about it"? Should an audience of graduate students have been subjected to the mishmash Madhav grandly called historical facts without the benefit of context and counterpoints?

No, said more than 150 academics teaching South Asian studies around the US. They signed a petition questioning the decision to invite Madhav in the first place. The petition zoomed through email boxes, getting weightier before Madhav travelled from one campus to another. The critics stressed that giving him a platform was akin to providing the Ku Klux Klan a free ride to spread hate. Surely, the history departments would not invite a KKK spokesman to learn about lynching. Madhav's 'talks' at universities would legitimise the RSS, gild his resume and give him a US stamp of approval, the critics said. Itty Abraham, a professor at George Washington University, asked what the "net advantage was of having someone like him speak? You humanise him and he puts layer upon layer of evilness on Muslims. We are lucky that he was unsophisticated. But what if a slick guy came?"

Sunil Khilnani, director of the South Asia program at JHU, stressed that he invited the RSS spokesperson because it was important to expose his students to the various "currents in Indian politics". Distancing himself from the speaker he had invited, Khilnani read a statement before the talk, clarifying that he and the department in "no way endorse the views" of the RSS. The RSS and its ideology are "dangerous and potentially destructive of the constitutional identity of the Indian republic." Since it is a "secretive organisation, it was all the more important that we hold it and its office-bearers up to the light of public debate." For this statement, Khilnani was assaulted with hate mail. "Hi Suniluddin," an obscene rant began, jumping quickly into the gutter of bile unfit for print.

Khilnani, who got brickbats from both sides, says he finds it problematic that there is "an unwillingness on either side to engage in an argument".His view is the academics who criticised him speak from a safe perch. "It is all very well to sit in academic campuses, publish in arcane journals, and keep one's hands clean. But it is not a political way of looking at the world. People have to engage in the battle of ideas and win," says Khilnani, whose book, The Idea of India, presents a nuanced appraisal of rightwing Hindu politics in India, among other things.

Francine Frankel, director of the Center for the Advanced Study of India, said she invited Madhav to U Penn to get some answers. "The RSS, which as a social organisation not subject to political accountability is, in reality, the ideological guide of the BJP, and its strongest source of grassroots political workers—an arrangement not present in any other democracy," she said. Questions about where Hindutva stands after Gujarat and the 2004 elections are pertinent and best addressed to the RSS spokesman, she added. Determined to control the event, she allowed only about 35 academics and graduate students to attend. No protesters, few tough questions—not the kind of temper one tends to associate with US campuses. And Madhav walked away sanguine. He simply didn't address the big questions on the grand alignment and ferment in the rightwing forces that Frankel posed. Instead, he gave his stock recitation against minorities.

By his own admission, Madhav was on a mission to clear the "concerns about Gujarat" in the Indian American community. Perhaps, funds from rich NRIs were drying up because Gujarat was just too difficult to rationalise. But he rallied the faithful while dipping deliriously into a society where anti-Muslim sentiment bubbles just below the surface. Three more university talks are scheduled. In the end he will have raked up a measure of credibility, and some legitimacy despite Gujarat and despite a hundred mutinies under way against the Christians.

S. Akbar Zaidi, a visiting professor from Pakistan who was at the JHU event, was surprised at the similarities between Madhav and the rabble-rousers back home. "One hears exactly the same type of vile stuff against Hindus and Indians from many Pakistani groups. I thought he would give a far more nuanced and intelligent presentation." David Ludden, a South Asia expert who heard Madhav at U Penn, wrote: "The RSS is moving to spin into the media mainstream and they might get people in the US to believe, little by little, that Hindutva is democratic and secular. (That) Muslims are intolerant." Even among American liberals, this message may go down smoothly, he warned. But he found the whole talk redundant because everything Madhav said is in the books. "So why listen to him? The RSS actions are sickening, its ideas are inane, its history is insane."

Madhav certainly seems to have got more from the universities than they got from him.

This Is A Jail