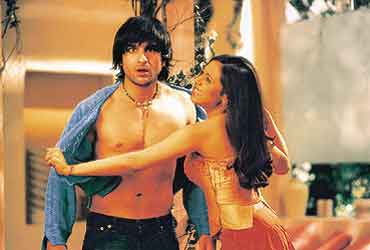 Ok, first some interesting information. Hum Tum has a heroine who sleeps with the hero before so much as thinking of a holy matrimonial alliance. What's more— when the "guilty" hero proposes marriage in return for the night out, she refuses staunchly. Premarital sex, well, ho hum! The hero, in turn, spends a good amount of screentime trying to fix a match for her and both actively think of love (for each other) only in the last few reels before The End. Incidentally, the two also happen to come from broken yet normal and quite happy families. Now doesn't that make for a hatke film? It could have. However, much of the presumed progressiveness goes nowhere because Hum Tum, ultimately celebrates the same old virtues—getting married, having kids and living happily ever after. There can be no other alternatives in life. It pretends to mark a radical departure without really straying very far from the comfort of the "square", plastic aesthetics of our countless designer romances.

The Indian When Harry Met Sally has Rani and Saif accidentally bumping into each other on a plane ride to New York. In the course of nine years, in which this global couple meets and sings songs at several corners of the world, they discover that they were actually always made for each other. Only you wish they hadn't spent such a lot of time over it.

Hum Tum is a conversational film that comes riding on some witty lines and starry performances. There's the token caricaturised character to bring the house down (Kher is a hoot as Rani's Punjabi mom) and nostalgia is kept alive with a main shaayar to nahin-singing casanova dad Rishi Kapoor. Perhaps it's to do with Saif's easy domination of every possible frame—it makes you feel as though the film is essentially the articulation of a male opinion on women, her point of view tends to take a backseat and Rani always seems to be reacting to a situation than taking an initiative.

The film uses a lot of animation links mainly because Saif happens to play the TOI cartoonist. But the cartoons never quite manage to take the narrative forward and become more of an irritating obstruction. Perhaps Mr Kohli & co could have looked more closely at R.K. Laxman's work in Mr and Mrs 55. Not just that, the battle of sexes in the Guru Dutt classic is still so much more sparkling. In Hum Tum it's little more than innocuous and infantile.