On the occasion of Ambedkar's birth anniversary, Boria Majumdar recounts the story of P. Baloo, a Chamaar cricketer who became BR's early inspiration 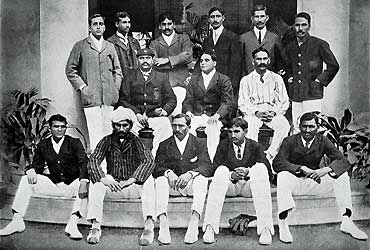 In his classic The Epic Fast (1932), Pyarelal writes: "Confined in the Poona Yervada jail, in September 1932, Gandhi had been forced to undertake one of his fasts unto death. This was against the decision of the British government to institute separate electorates for the low castes, a decision supported by Ambedkar. This fast continued for several days to be finally broken by a compromise reached between Gandhi and a delegation of the untouchables consisting of Ambedkar, M.C. Rajah and P. Baloo." As Ram Guha has written, "historians who have written on the controversy do not generally bother to identify him (Baloo) quite possibly because they cannot." Baloo, he rightly says, was the first public figure to emerge from the ranks of the untouchables commanding enormous respect inside and outside the community. This was the time when caste prejudices were at their oppressive best, a fact evident from the history of the breast cloth controversy in south India. Under the prevalent norm in the south, women of lower castes were not allowed to cover their breasts, an act perceived as a show of respect to the higher castes. Against this backdrop, Baloo, a Chamaar born in Dharwad in 1875, had by his sporting prowess forced the Brahmins of the Deccan Gymkhana—eager to beat the British Poona Gymkhana—to take him into the team. A few years later, he was recrui-ted by the Poona Gymkhana, and then the Bombay Hindu Gymkhana, who even admitted his brothers—Shivram, Ganpat and Vithal. This was the start of a spectacular family sporting history that reached its climax when Vithal, captain of the Hindu side in 1923, was carried out of the ground on the shoulders of high-caste Hindus after he had led them to victory in the quadrangular tournament.

In view of this extraordinary development in an India riven by caste prejudices, the Indian Social Reformer wrote in 1906: "The Poona Hindu Gymkhana who consisted of mostly upper-caste Hindus found that Chamaar though Baloo was, his inclusion in the Hindu team would improve matters considerably. With this pluck and spirit which the Poona Hindus of the 1890s had, they admitted him as their member and so far (as) pollution from touch with a low caste went, the plucky Brahmins of Poona gave a slip to orthodoxy." A few years later the Bombay Hindu Gymkhana, "with such an example from orthodox Poona, admitted him after pacifying a few Gujerati (sic) members as regards his admission. The Hindu Gymkhana went further and they openly began inter-dining with Baloo. (Soon) Shivram, Baloo's brother, was admitted without the least scruple. The history of the admission of these Chamaar brothers in the Hindu Gymkhana is a credit to all and has done far more to liberalise the minds of thousands of young Hindus than all other attempts in such spheres." From this, The Indian Social Reformer went on to conclude that this was a "landmark in the nation's emancipation from the old disuniting and denationalising customs.... Hindu sportsmen in Poona and Bombay have shown... that, where national interest required, equal opportunity must be given to all of any caste, even though the offer of such opportunity involved the trampling of some old prejudices. Let the lesson learnt in sport be repeated in political, social and educational walks of life. Let all disuniting and denationalising customs disappear and let India cease to be the laughing stock of the whole world".