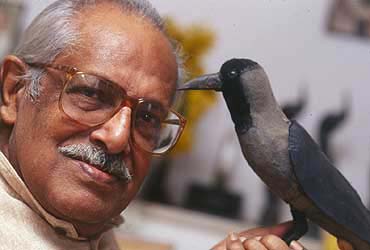 outlookindia.com
-0001-11-30T00:00:00+0553
Hrishikaku had been my guardian ever since I came to Mumbai. My life, my career unfolded under his watchful eyes. My relationship with him was always that of a father and daughter. He called me "Joyama". I first met Hrishikaku at the FTII (Film and Television Institute of India) when I was in my final year. He had met the principal, Jagat Murari, in Bombay and asked him to suggest a girl to play Guddi. Jagat Murari invited him to the institute and he came and saw one of my diploma films. He spoke to me about my father, a well-known writer in Bengal, and asked, "So, you want to work in films?" I said "Yes", and he said, "Okay, you are in my film Guddi." I immediately felt at ease with him. He invited me to stay with him in Bombay and I did.

I never felt that I was in front of the camera with him. The atmosphere in his unit was such that no one was treated like a star, nor was anyone treated harshly. We had an extremely happy and wonderful time on his sets. It wasn't like other sets where actors would leave to rest in their make-up rooms. After your shot, you would sit and talk to others. You didn't have assistants coming and saying, "Madam, your shot is ready." For me, his unit was like home.

Guddi was a truly memorable debut role. I felt that I grew up with Guddi. Till then, I was still a child. He gave me a lot of freedom as an actress. He also let me improvise. The best thing about him was that he'd pick up a certain mannerism of yours, show it to you and tell you: "This is yours, patent it." With me, it was my laugh or the way I wrinkled my nose. He'd allow me to be natural. I remember, in the last scene of Guddi where I had to go up to the terrace and cry, my kajal started running and he told me to just let it be.

I was very possessive about my relationship with him. If he praised other artistes, I'd get very upset and pick an argument with him, even throw a small tantrum and complain, "Why do you need me then?" Or I'd say, "You don't care, you like other people, you never mention me in your interviews." And he'd tell me to shut up. Strangely enough, he rarely spoke about me. I remember only one article where he said that I was the only actress who has complete command over her reactions.

Those days I used to question the filmmakers a lot. If I had to do an intimate scene I'd argue with my directors and ask why it was necessary. But with Hrishikaku I never had this problem. You could do a complete film and not even have to hug your hero. For me, that was a great relief. Another thing I liked about working with him was that I could go without make-up. I hated make-up. Most of Mili was done without the greasepaint. I trusted him completely as a director, I knew I could always depend on him to tell me, "No, let's do this shot again."

Abhimaan was great fun too. Amit and I improvised a lot; all three of us were very involved with the film. If I wasn't working with him, Amit was, so we were always around his sets. When I see Mili today, I feel terrible. I could have done it much better. Amit, who had a less important role in it, was excellent while I had probably become too complacent.

Hrishikaku always called Amit 'Maharaj'. While Amit was in hospital, I had gone to visit Hrishikaku and he asked me how Maharaj was. Amit couldn't bear for Hrishikaku to see him unwell and in hospital, but he was adamant. We finally made him wear a mask to go to the ICU, and when he saw Amit tears rolled down his cheeks. When Amit was in hospital recently, Hrishikaku used to come to the same hospital for dialysis and I used to meet him there regularly. Whenever any film of Amit's or Abhishek's was released we'd send him a DVD. It used to make him very happy.

You'll find in each of Hrishikaku's films at least one scene which vividly captures moments from everyday life—emotions, actions, situations which happen to all of us. It's what made his films so unique, and so well-loved.