Manmohan met Chidambaram eight times in three weeks. What did he tell him? 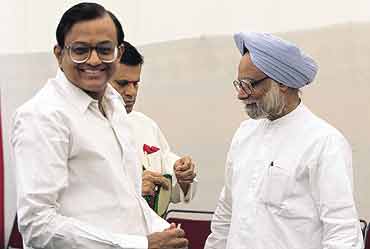 outlookindia.com
-0001-11-30T00:00:00+0553
A Prime Minister's contribution to a budget is usually like a filmi husband's: he hands over the purse, strings and all, to his finance minister, perhaps throwing in a cautionary word or two. But in the three weeks of relentless planning that went into creating Budget 2004, Chidambaram received more help than he expected from Manmohan Singh. Manmohan had over eight meetings with his FM, each session lasting two to three hours. Besides, there were countless telephone calls between the two, and meetings between their top aides. "The PM's involvement was at multiple levels," says a Manmohan aide.

Of course, it's hardly surprising that Manmohan, with five budgets under his belt, worked hand-in-hand with Chidambaram in drawing up Budget 2004. But his aides say that the PM wasn't spending all those hours proffering budgetary advice. Says one of them: "He's not a man who steals anyone's thunder. But this government's mandate was mostly on economic issues, and as PM, he has to ensure that the mandate is reflected in the budget. He was there to provide the political input that was required."

One of those inputs was to insist on relief measures for farmers. The day after his visit to suicide-hit villages in Andhra Pradesh, Manmohan held a long session with Chidambaram. "He was very struck during this visit that nearly all the families of the dead farmers were pleading not for money from the government, but jobs for their children," says a PMO official. His experience in Andhra also convinced him that good economics means going to villages and finding out what the aam aadmi wants. This is the advice he gave vice-chairman of the Planning Commission, Montek Singh Ahluwalia, and would undoubtedly be what he told his FM.

Another role was to smooth ruffled feathers. According to PMO sources, Chidambaram's proposal to set up an Investment Commission sparked off a turf war. It was Manmohan's task to get industry minister Kamal Nath to agree to this. The Left parties did not like Chidambaram's idea of a Board for Reconstruction of Public Sector Enterprises, which doubles as a disinvestment commission. Inevitably, it was Manmohan who persuaded the Left.

Sunshine In A Briefcase